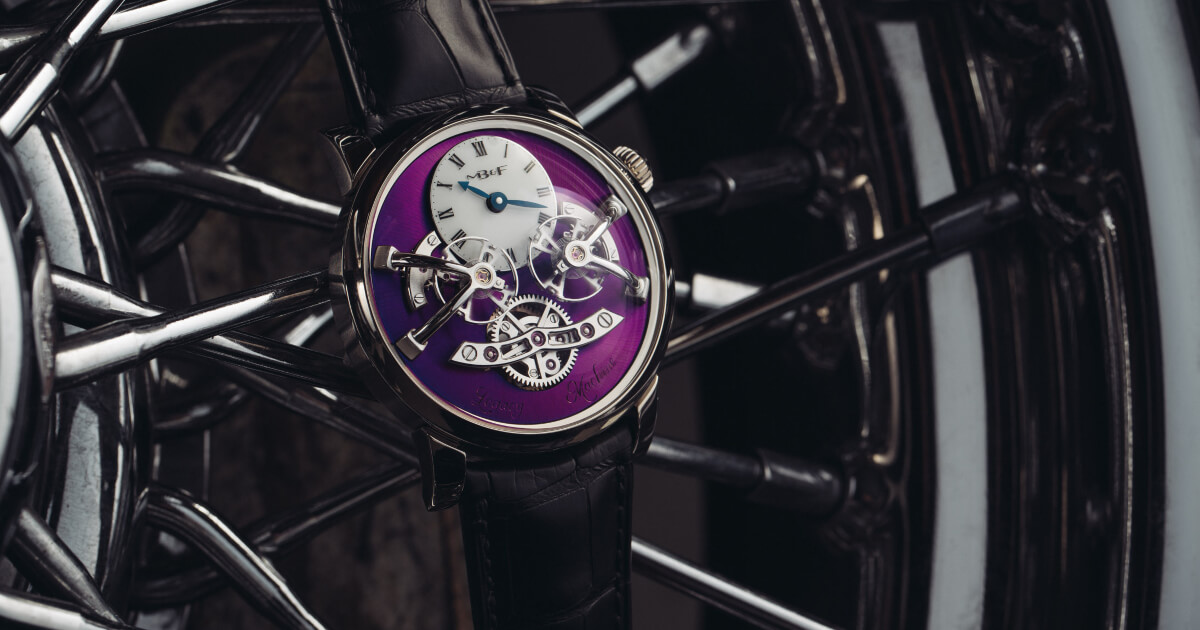 In human beings, the visible spectrum of light falls between red and violet, with infra-red and ultra-violet lying just beyond these two extremes. When we see the colour purple, what our eyes are actually taking in is the highest possible frequency of light that the human eye can perceive.

MB&F Legacy Machine No.2 also lies at the highest end of its horological spectrum. When it was first presented in 2013, it was one of the most forward-looking expressions of traditional mechanical watchmaking in the market. Even today, LM2 still occupies the end-zone of innovative horology, and a new version, presented with a purple dial of arresting visual depth, embodies this position.

Back in white gold, the material of one of its launch editions, LM2 frames its hypnotic engine in a case that is discreet yet precious. Following the sleeker balance bridges of the redesigned LM2 Titanium, the LM2 White Gold Purple offers a more elegant take on the original industrial aesthetic of the first LM2. The sunray-finished dial plate is given its purple hue via the process of chemical vapour deposition (CVD), which evenly coats the dial surface and gives it a multi-faceted colouration under different angles of light — ranging from a deep violet to an almost electric shade of plasma purple.

Legacy Machines are wondrous reinterpretations of significant horological inventions by the greatest watchmakers in history. So the contemporary look endowed by the otherworldly appearance of Legacy Machine No.2's dual flying balances, suspended high above the dial from four gracefully arcing arms, may at first appear paradoxical. But make no mistake; LM2 is a timepiece tracing its lineage back over 250 years to three of the greatest watchmakers who ever lived: Abraham-Louis Breguet (1747– 1823), Ferdinand Berthoud (1727– 1807) and Antide Janvier (1751– 1835).

These horological legends of the 18th century are united not only by their inventive genius, but also by the fact that they have all constructed clocks and watches with two balances. Oscillating on high, the exalted double balance wheels of LM2 were inspired by, and pay homage to, one of the rarest mechanisms in the history of watchmaking: the dual regulator. And rarer still, the average rates of Legacy Machine No.2's dual regulators are transmitted by a differential to a single gear train, where the majority had two separate movements.

On display under a domed sapphire crystal cupola, the dial of Legacy Machine No. 2, which is actually the top plate of the exquisitely finished movement, is an object lesson in symmetrical simplicity. Top to bottom: the white stretched lacquer sub dial at 12 o'clock, with its blued gold hour and minute hands, is visually balanced by the large, raised differential at 6 o'clock. Left to right: the two flying balances and their escapements are identical mirror images, right down to the position of the stud holders pinning their balance springs.

While the levitated oscillating balance wheels of the binary regulators catch and hold the viewer's gaze, it is the large planetary differential sitting proud of the dial that is the real heart of Legacy Machine No.2. In an incredible feat of micro-engineering − and the sheer paucity of timepieces with multiple regulators connected via a differential attests to the enormous difficulty in creating such a complex high-precision mechanism − the differential has three roles: 1. Transferring power to each of the regulators; 2. Receiving the individual timing rates from each balance; and 3. Transmitting the average rate of the two regulators to the gear train, where it finally manifests itself as the displayed time.

The movement of Legacy Machine No.2 was developed to MB&F's specifications by award-winning watchmaker Jean-François Mojon (Best Watchmaker at the 2010 Grand Prix d’Horlogerie de Genève) and his team at Chronode.  Acclaimed independent watchmaker Kari Voutilainen ensured that the movement's aesthetic style was consistent with high-quality traditional timepieces of the 19th century and for specifying the superlative hand-finishing.

Immaculate Geneva waves, gold chatons, mirror-polished bevels and bridges designed with deliberate internal bevelled angles (which cannot be finished by machine) showcase the movement's peerless fine finishing. Consistent with MB&F's spirit of transparency, the names of the two men responsible for the movement are hand engraved on the back.

Two and a half centuries after three of the world's greatest watchmakers put two balance wheels into their movements, MB&F celebrates their pioneering works by creating LM2, a timepiece with two balances hovering outside the movement.

Legacy Machine No.2 White Gold Purple is the latest of the series, a limited edition of just 12 pieces.

MB&F Legacy Machine No2 in detail

History of dual regulator timepieces: Even today with computer aided design programs (CAD) and ultra-high-precision CNC machines, the sheer complexity of high-end mechanical watch movements requires skilled assembly and regulation to achieve good timekeeping over a range of positions. Whether the watch is laid flat, vertical (on its edge), crown up or crown down, slightly affects the components inside – and the balance in particular – which in turn slightly changes the timing rate.

In the 18th century, higher manufacturing tolerances coupled with low-quality oils meant that it was virtually impossible to regulate a movement to the high precision we have come to expect today. So it should come as no surprise that the greatest horologists of the period experimented with a wide variety of mechanisms to improve timekeeping.

While Ferdinand Berthoud (1727– 1807) averaged his two regulators mechanically, Abraham-Louis Breguet (1747– 1823) and Antide Janvier (1751– 1835) both created double regulator timepieces using the phenomena of resonance to average the rate of the two balances, It should be noted that the majority of dual regulator timepieces, especially those using resonance to couple the two systems, had two complete movements rather than just two regulators.

The fact that these horological geniuses made such a limited number of clocks and watches with double regulators (just a few each) indicates that they doubted that the reward was worth the effort.

Nearly 100 years later, in the 1930s a few of the very best students at the Watchmaking School of the Vallée de Joux made double regulator pocket watches with the rates of two balances averaged by a planetary differential. The students usually made two pieces each – one for themselves and one for the school – and it is thought that 10 such timepieces exist.

Philippe Dufour, an independent watchmaker based in the Vallée de Joux saw one of these pocket watches and was inspired to create his Duality. Launched in 1996, the Duality was the first known wristwatch to feature two balances joined by a differential. There have been a (very) few other double balance wristwatches coupled via differentials.

The advantage of using a planetary differential is that the two balances beat at their natural rate, with the differential supplying the average of the two completely independent frequencies. Other mechanisms when coupled have one balance slowing down or speeding up the other to achieve an average rate and this induces slight stresses in the system.

Dial side: While superficially Legacy Machine No.2 may look like a traditional round watch, its three-dimensional architecture offers visual treats on multiple levels. What looks at first glance to be the main dial is actually the top plate of the movement, which has been finely engraved, plated and then hand-engraved with Legacy Machine below the differential.

Slightly raised above the surface is the hour-minute sub dial, its fine gold circumference highlighting the pure white of the stretched lacquer dial, which is created by applying and heating multiple layers of lacquer, causing them to stretch tightly over the surface of the dial. The white contrasts superbly with the bright blued 18k gold hands. The hands are slightly curved to follow the slightly convex surface of the sub dial. To ensure aesthetic purity of the dial and its traditional Roman numerals, a sophisticated fixation underneath negates the necessity of visually obtrusive screws.

The planetary differential also sits proud of the surface, supported by a stunning double-arc mirror-polished bridge inset with three large jewels. The complex differential is the key element in the double regulator system and raising it just above the movements enables the mechanism to be better appreciated.

Suspended above both the sub dial and the differential are the two oscillating bespoke balance wheels. The dual balances feature Breguet overcoils, inset with four fully functional timing screws. The two balances are mirror images of each other so that they react differently to different forces. The distance between the balance wheels has been carefully and deliberately calculated to avoid resonance, as this would negatively interfere with regulation.

Those elegant majestically curved arms suspending the flying balances are sculptural works of art in themselves.

Fine Finishing and Historical Fidelity: Independent master watchmaker Kari Voutilainen assumed responsibility for ensuring the historical accuracy of the style and finishing of the Legacy Machine No.2 movement.

On the back of the movement, over-sized ruby jewels set in highly-polished countersunk gold chatons provide striking visual counterpoints to the Geneva waves traversing the sensually curved bridges. While providing historical links with the large jewels seen in high-grade antique pocket watch movements, the ruby bearings have a practical application in reducing wear by accommodating large diameter pinions and holding more lubricating oil.

Inspiration and Realisation: Maximilian Büsser has had a long affinity with pocket watches of the 18th and 19th centuries. Virtually all horological complications we see today were not only imagined in that period, they were developed using just paper and pen (no sophisticated computer programs), components were produced to extremely high precision using – by today’s standards – fairly primitive machines (no electricity) and finely finished, assembled and regulated to an incredibly high quality that we still strive to match today. Their generous size compared with modern wristwatches allowed for uncluttered movement architectures with beautifully shaped bridges and plates.

While MB&F’s futuristic Horological Machines have a firm foundation in the very best of traditional horology, Büsser wanted to pay homage to that rich tradition by imagining the type of timepieces he might create if he had been born 100 years earlier, i.e. 1867 instead of 1967. With its two, flying balances, raised planetary differential, historical bridge designs and classical fine-finishing, LM2 celebrates historical dual regulator watches with flair and passion.

Planetary differential transmits the average rate of the two regulators to the single gear train.