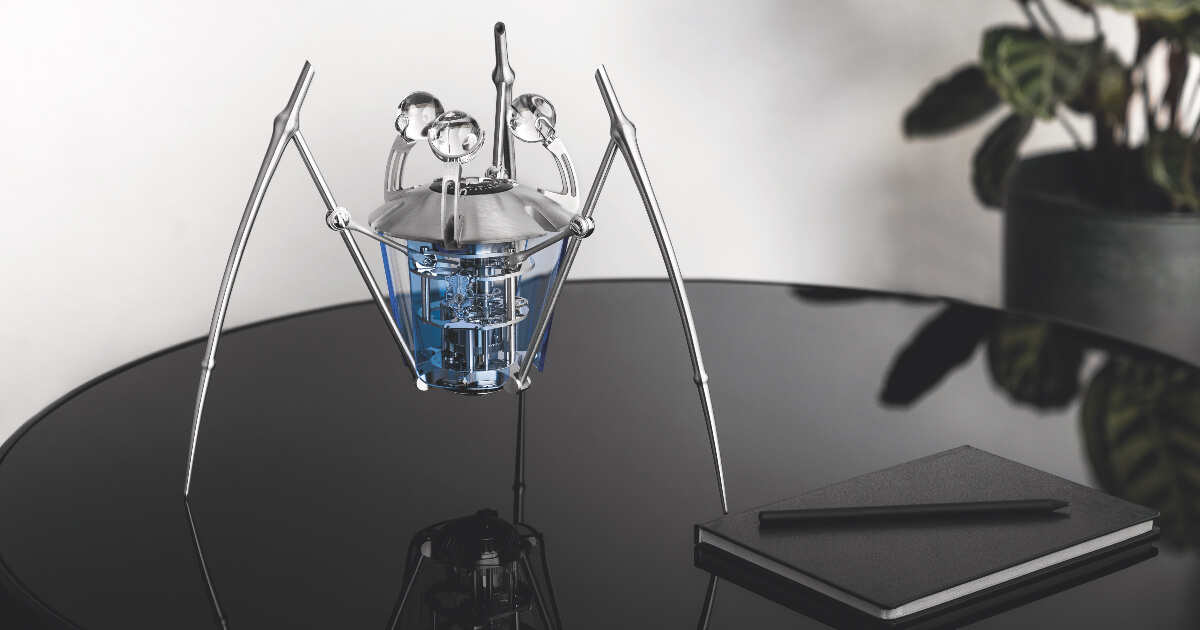 “Art begets art”, American author Susan Vreeland once famously said. And this is certainly true in the case of Trinity, the 13th collaboration between MB&F and Switzerland’s premier clockmaker L’Epée 1839.

Trinity comprises a minimalist clock face suspended between three delicate insect-like legs. It follows the mighty T-Rex in what will become a trilogy of half animal/half robot creations that MB&F calls Robocreatures. Trinity’s name originates in the trios that inform it: three legs, three insect-eye spheres, and three movement levels comprising the creature’s mechanical body. Also, Trinity is the second in a group of three clocks set to form a trio. MB&F founder Maximilian Büsser describes Robocreatures; “In the same way that H.R. Giger created his Alien universe, we’re creating our own world of creatures”.

TriPod features three delicate legs supporting a colourful body, three insect-eye spheres made of precision lens-quality glass, and a clock dial making one full revolution in 36 hours that indicates three sets of hours and minutes. Underneath the dial is a 182-component three-dimensional sculptural movement crafted on three levels by L’Épée 1839 with a vertical balance slowly beating at a traditional 2.5Hz (18,000vph). Time-setting and winding are by key, and when fully wound the movement offers a generous eight-day power reserve.

An essential element of TriPod is indicating the time, which is done by looking down on the dial composed of rotating disks. But this clock requires some interaction between Man and Machine: the observer reads the time thanks to three optical spheres, each magnifying the clock’s numerals and making them legible.

To allow all three of the “insect eyes” to show the time from any angle, the dial features three sets of numerals 1-12, meaning that the dial completes a full rotation in 36 hours instead of the customary 12 hours. The time is visible through one of the magnifying lenses at any time.

“These clocks are our companions”, says Büsser. “They live. They tick. They’re like a pet – bringing life into your interior”. Jurassic Park also famously gave us life where there wasn’t… but what came after the dinosaurs? The trio of Robocreatures provides one imaginative possibility.

Young designer Maximilian Maertens was the creative incubator for TriPod, during his internship at MB&F. The 1993 film Jurassic Park was a big influence on Maertens as it was the first movie he remembers watching as a child. While Maertens’ inspiration from his childhood memory was first realized in MB&F’s T-Rex, the first clock in the Robocreature trilogy, it’s been a gift that keeps on giving. Which is apt as the entire premise of all of MB&F’s mechanical masterpieces is to foster children’s dreams as a creative adult.

When designing T-Rex, Maertens imagined a backstory to guide his development process to create a coherent balance of mechanical and organic visual elements. That story grew from elements in MB&F’s past projects that included a starship pilot discovering new planets. As Maertens uncovered further inspiration from his love of Jurassic Park, a new story began to unfold that is now the backbone of the Robocreature trilogy.

TriPod represents how time originates for Jurassic Park. “This insect is the transition between dinosaur and what comes next because they’re all still here”, says Maertens.

While the primary inspiration for TriPod is the mosquito caught in amber that provides the DNA to genetically craft new dinosaurs, for the clock’s look Maertens decided to emulate a water strider (Gerridae), an insect able to walk on the surface of water using surface tension and its long, slender, hydrophobic legs to distribute its weight over a large surface area.

“It feels much like a levitating insect walking over the water,” Maertens explains, “and this inspired me to create something that looks very delicate. This is a direction I like to go, even if it caused some strife with the engineers over issues like stability”. TriPod’s three long legs make it seem too fragile to be true, but the balance is so perfectly calculated that the entire creation comes across as elegantly as the insect it’s modelled after.

The 26-cm tall TriPod is made of plated brass and weighs approximately 2.8kg, its mass perfectly distributed over its delicately sculpted legs.

As a sculptural clock, an essential element of TriPod is indicating the time, which is done by looking down on the dial composed of two concentric, rotating disks. The outer disk displays the hour while the inner disk displays the minutes in increments of 15. Reading the time requires interaction between Man and Machine: the observer reads the time thanks to three optical spheres, each magnifying the clock’s numerals and making them legible.

To allow all three of the “insect eyes” to show the time from any angle, the dial features three sets of numerals 1-12, meaning that the dial completes a full rotation in 36 hours instead of the customary 12 hours. The time is visible through one of the magnifying lenses at any time as well as the dial from above (albeit much smaller).

Arnaud Nicolas, CEO of L’Epée 1839, has a master’s degree in optics, so can well explain how making the mineral glass spheres forming the three insect-eye magnifiers was one of the greatest challenges in creating Maertens’ creative vision. “The precision of the sphere had to be very, very accurate,” he explains. “It’s not at all common for a ball-shaped piece of glass to have the tolerance of an optical lens”.

L’Epée’s engineers calculated the best distance between the dial and the spheres, as well as a size for the spheres that was large enough to allow the time to be seen, but not so large that they would alter the design. In other words, the proportions, the right magnification, and the right distances were tantamount to the success of TriPod. And to get that, the shape of the spheres had to be made very precisely – within 10 microns – as even the tiniest bit of misalignment would change the magnification, making it blurry.

The spheres are suspended by brass “arms” cradling them like hands so as not to disturb their perfectly round shape or scratch them. Nicolas explains that manufacturing these cradles for the lens spheres was difficult to do in one piece, which was necessary to maximise stability.

The protective shields that are the insect’s body are crafted in cast acrylic – offering shock resistance, lightness and optical clarity – in the same three colours that MB&F and L’Épée 1839 had already used for the three variations of T-Rex. Coming in flashy neon green, blue, and red, these translucent shields allow a view of the finely finished clock movement. They also allow the movement to be placed in the middle of the creation to mimic an insect torso and so that the Robocreature is not looking in any one direction, but rather over 360 degrees. TriPod looks the same from every direction, apart from the creature’s visible heart: the movement’s balance. “These shells, or shields, were inspired by chitin, an insect’s exoskeleton”, Maertens confirms.

TriPod is powered by a movement completely designed and produced in-house by L’Epée 1839 and finished to the highest standards of traditional Swiss clockmaking. But it’s different than L’Épée 1839’s other movements: “We designed it to have four plates in order to have three different areas inside the movement in keeping with the TriPod theme”, Nicolas continues. “It would have been easier for us to have everything on one layer, but I am really picky: I like to go deep into details when we manufacture something. Even if it’s more complex, we don’t choose the more cost-effective or simpler way; we use the way that makes the most sense”.

A table clock, TriPod features essentially the same mechanisms as a wristwatch only larger: gear train, mainspring barrel, balance wheel, escape wheel, and pallet lever. L’Epée 1839’s regulator also features an Incabloc shock protection system, something generally only seen in wristwatches, which minimises the risk of damage when the clock is being transported.

One might be tempted to think that the more substantial size of the components simplifies work. However, because of the bigger surface areas, finely finishing the movement is much more time-consuming than finishing a wristwatch. Nicolas explains: “Doubling the size of the components requires much more than simply doubling the time to finish them; the complexity increases exponentially...".

“For polishing you need to apply the same pressure as you would finishing a watch movement but on a bigger surface, and that’s more challenging. It’s thanks to the experience and dexterity of our clockmakers that TriPod can feature such superlative fine-finishing”.

Display: Hours and minutes are indicated on two concentric dials visible from each of the three optical mineral glass spheres. Dials make one full rotation in 36 hours.

·       Manual-winding: double-ended key to set time and wind the movement