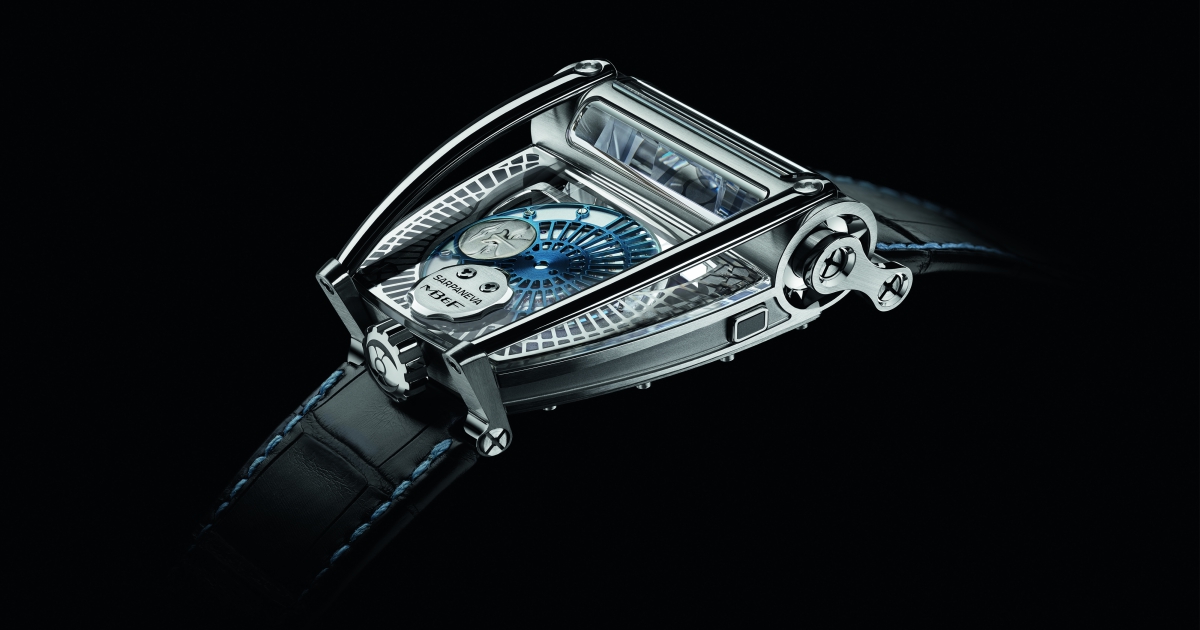 As strange as it might sound, moonlight doesn’t exist. It is an illusion, and even the word “moonlight” is misleading. The moon gives off no light of its own, it only
reflects light from the sun. In effect, moonlight is sunlight, projected onto Earth via the moon.

If there’s one person who can be relied upon to thoroughly grasp this concept, it’s Stepan Sarpaneva, the independent Finnish watchmaker whose work has become synonymous with the moonphase display. Little wonder, then, that the second collaboration between MB&F and Stepan Sarpaneva has resulted in a horological creation
that occupies the same elusive space as moonlight, somewhere between illusion and reality. The MB&F MoonMachine 2 brings us the world’s first projected moonphase display.

The projection is accomplished via an optical prism, which refracts the hours, minutes and moon discs in their flat positions to appear as if they are perpendicular to the
engine. The prism is cut to magnify the hours and minutes by 20 percent for greater readability, but not for the moonphase display, which is at risk of distortion if magnified. The case of MoonMachine 2 is 0.5mm thicker than that of HM8, to accommodate the additional moon disc, and has a pusher on the side for quick adjustment of the moonphase display.

The battle-axe rotor of HM8 has been transformed into an openworked radial web of titanium, echoing the design vocabulary of Stepan Sarpaneva’s best-known work. The sapphire crystal pane framing the top of the MoonMachine 2 engine has been metallised in a similar pattern and draws focus to the variable sheen of the brushed titanium rotor as it rotates.

There are three instances of the immediately recognisable Sarpaneva moon in MoonMachine 2, its piercing eyes and pointed features based on Stepan Sarpaneva’s own face. Two of the Sarpaneva moons are mounted on the moon disc, taking it in turns to cycle under a Korona ring — another Sarpaneva design hallmark — to indicate the phase of the moon. The third is mounted on the winding rotor. Each moon is made of gold and finished by hand, which is incredibly challenging at their size. The two small moons on the moon disc measure 4.5mm in diameter and 0.35mm in thickness, while the rotor moon is 8.5mm wide and 0.45mm thick. The hand-finishing process is extremely delicate and the failure rate is very high, meaning that each completed moon will be the result of multiple work sequences.

A Korona-framed gold plaque commemorating the collaboration between Stepan Sarpaneva and MB&F is affixed on the sapphire crystal pane, adjacent to the crown.
According to MB&F founder Maximilian Büsser: “We would never have done MoonMachine 2 on our own, and Stepan would never have done it on his own. But that’s what I love about Performance Art pieces — the chance to expand the MB&F universe in unexpected ways.”

Stepan Sarpaneva’s take on the project is illuminatingly personal. “Max and I have a very long friendship, and there is a lot of honesty between us. He pushes me to do better and gives me the most challenging projects. This time the challenge was to augment HM8, which is not easy. But it’s fun, and that’s why I say yes to any project with Max.”

About Horological Machine No.8 And The Hm8 Engine

First launched in 2016 as the adrenaline-laced “Can-Am”, Horological Machine N°8 is an evolution of the heads-up time display that MB&F debuted five years ago in the HM5 “On the Road Again” and subsequently refined in the 2015 HMX.

The HM8 engine is a compact, in-house developed movement built on a Girard-Perregaux base, with a jumping hour disc and a running minutes disc. Optical prisms fixed over the discs at specific points capture the time, refracting and magnifying the numerals so they can be read on a vertical plane. Horological Machine N°8 is completely pared down in terms of exterior cladding, not just to emulate the bare-all aesthetic of Can-Am racecars, but also to allow as much light as possible to flood the prisms and maximise the clarity of display.

Additional references to the source material include the slender titanium roll bars flanking the crown, sweeping forwards to anchor the time display cylinder. Motoring enthusiasts will immediately recognise the “oil sumps” visible through the sapphire crystal panes on the underside of HM8 — these are functional as well as decorative, providing access to the pivots of the hour and minute discs for tribological maintenance.

Challenges Of The Moonphase In Moonmachine 2

The smallest gold moons are first stamped to a thickness of 0.55mm, and then reduced by hand-turning on a lathe to bring their height down until just under 0.4mm. They are then manually ground down with a stone tool until they are 0.35mm at their thickest point, then matt blasted to create an even finish. At their thinnest point, around the eyes, the moons can be as little as 0.07mm thick, almost like a gold foil, and the slightest pressure will cause the soft gold to perforate and the moon will have to be discarded.

The 4.5mm-wide moons are at the very limits of what can be worked on by hand — any smaller and the features of the moon’s face will no longer be clearly visible. As it is, they are hardly discernible by touch, even by the experienced fingertips of Stepan Sarpaneva and his team. These near-impossible dimensions are necessitated by the constraints of the MoonMachine 2 case and the tolerances needed to fit under the optical prism while providing adequate clearance for the hour and minute discs.

On average, eight moons out of every 10 are eventually discarded for not meeting the high standards set by Sarpaneva and MB&F. Furthermore, the small moons come in
pairs, since there are two on each moon disc, so they have to be perfectly matched as well as perfectly finished.

In 2012, when the first MoonMachine was presented, the MB&F-Sarpaneva connection was the first time that a piece of MB&F Performance Art had been produced in
conjunction with a watchmaker, and it continues to hold a special place in the MB&F pantheon.

The evolution of this partnership is represented by the advancement between the first MoonMachine, which was based on the HM3 Frog, and MoonMachine 2. Although they both utilise the rotor and moonphase display as locus points for incorporating the Sarpaneva contribution, MoonMachine 2 takes this seemingly straightforward
addition and gives it an exponential bump by turning it into a world premiere — the first ever projected moonphase display.

MB&F founder Maximilian Büsser and Sarpaneva began talking of a sequel to MoonMachine not too long after its release, when HM5 was released and Stepan suggested that a moonphase indication could go between the hours and minutes of the first Horological Machine to use the optical prism display. It wasn’t until HM8, however, four years after MoonMachine, that this became more than a suggestion and laid the foundations for MoonMachine 2.

MOONMACHINE 2 is based on a specially configured HM8; the projector moon complication was imagined, designed and created by Stepan Sarpaneva. It is available in three limited editions of 12 pieces each.

Three-dimensional engine conceived and developed by MB&F from a Girard-Perregaux base calibre, with moonphase complication by Stepan Sarpaneva

Bi-directional jumping hours, trailing minutes and moon phase displayed by one optical prism that reflects vertically. The hour and minutes segments are magnified by 20%.

The dual moons rotate under a Korona ring and are corrected by a pusher.

Three limited editions of 12 pieces each:

All sapphire crystals – front, back, top, bottom – treated with anti-reflective coating on both faces. Top plate with special metallisation.