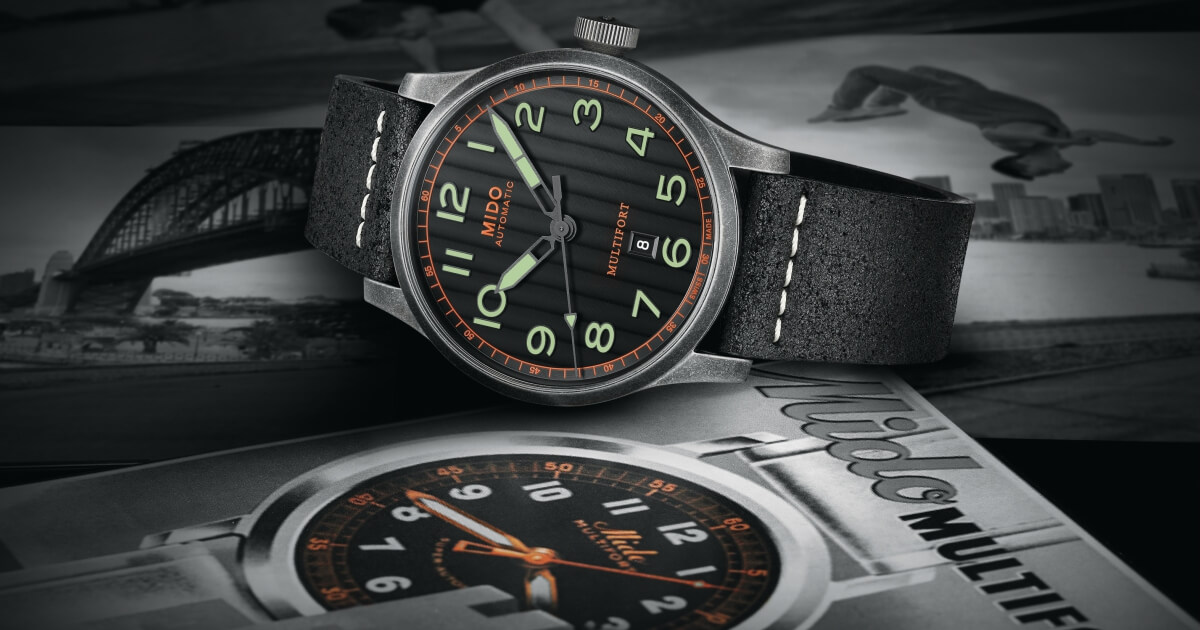 In 1947, American pilot Milton Reynolds broke the record for an around-the-world flight with a Multifort on his wrist. Seventy years later, its contemporary reinterpretation is sure to win over thrill-seekers and anyone wanting to explore new horizons, such as parkour enthusiasts, who turn architecture into an immense playground.

Launched in 1934, two years after the Sydney Harbour Bridge was completed, the Mido Multifort collection shares the structure's remarkable qualities - a perfect blend of functionality and beauty. A truth that has stood the test of time, as Mido celebrated the 80th anniversary of Multifort production in 2014, making this emblematic collection one of the longest-produced series in the history of Swiss watchmaking.

Mido has designed its new Multifort Escape for those who refuse to accept compromise. It is a sporty, masculine timepiece designed for surpassing limits and exploring new horizons. In 1947, American pilot Milton Reynolds broke the record for an around-the-world flight in 78 hours and 55 minutes with a Multifort on his wrist. This model served as the inspiration for the Multifort Escape. Seventy years after this feat, this contemporary reinterpretation will be a fitting timepiece for anyone wanting to explore new horizons and surpass their limits. Such as parkour enthusiasts: the urban athletes who turn cities and buildings into an immense obstacle course at top speed and in style.

Mido's largest three-hand model, the Multifort Escape features a robust 44 mm stainless steel case with an aged and sandblasted black PVD treatment, a finish which makes each model unique. Protected by a domed sapphire crystal with an anti-reflective treatment on both sides, the black dial is decorated with vertical Geneva stripes that create a subtle and entrancing play on shadow and light, and adorned with several orange touches, a nod to Mido's identity and to the model of the 1940s. Touches of green Super-LumiNova® on the numerals and the hands give it a vintage look and ensure perfect legibility in any circumstances. These hands are directly inspired by the earlier model, as are the dial and the crown. A window at 6 o'clock indicates the day and date.

The Multifort Escape is fitted with a latest generation automatic movement, the Caliber 80 (ETA C07.611 base), which gives it exceptional autonomy: up to 80 hours of power reserve. The movement has 25 jewels and euns at 21,600 vph. It is adjusted on 3 different positions for high accuracy.

This finely decorated Elabore-grade movement, with its oscillating weight decorated with Geneva stripes and the Mido logo, can be viewed through the transparent case back. Water-resistant up to a pressure of 10 bar (100 m / 330 ft), the Multifort Escape comes with a magnificent, natural-looking black strap made from genuine calfskin. It is decorated with ecru stitching and features a stainless steel pin buckle with an aged and sandblasted black PVD treatment, the ultimate vintage touches to this model. Three other versions of the Multifort Escape are also available, including a special edition set to be released this autumn.