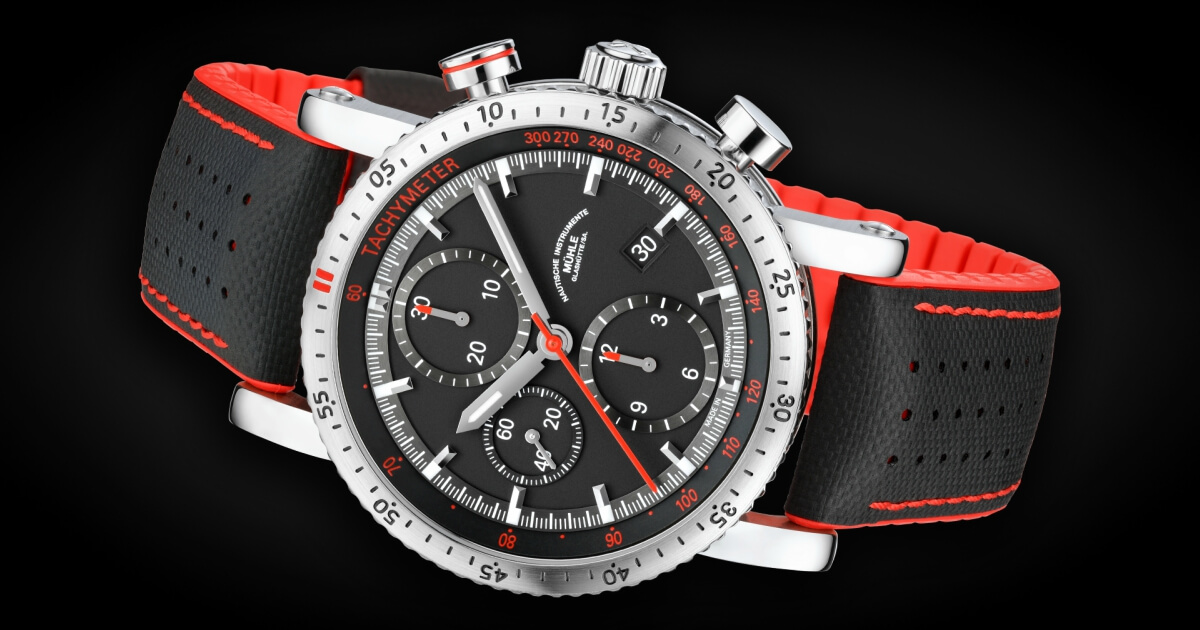 Be it roaring down the Nurburgring race track or speeding down the slopes in the Swiss Alps, the new Teutonia Sport I doesn't just thrive on measuring the time it takes to cover a certain distance, but also loves to reveal speed measurements at a glance too. This special feature of the new sport chronograph from the German town of Glashutte is all thanks to its clever tachymeter function, which makes the Teutonia Sport I the ideal companion when it comes to recording both time and speed.

When the sun is shining and the sky is blue, there's nothing better than grabbing your sports car, motorbike or mountain bike, putting the pedal to the metal and seeing just how fast you can really go. With the tachymeter function of the Teutonia Sport I, you can now even convert the feeling of the wind in your hair into real speed-related figures. The red scale on the flange of the watch enables you to read your speed over a distance of 1000 metres at a glance.

The Teutonia Sport I is your trusty speed-recording companion come rain or shine thanks to its high-quality case, which is resistant up to 10 bars, and its red and black leather/rubber strap, which not only adds to the watch's sporty appearance, but is also waterproof.

The latest sports chronograph to be developed by the experts in Glashutte is therefore perfectly designed to not only understand, but also thrive on a need for speed. Its patented woodpecker neck regulation gives its MU 9413 automotive movement the robustness that defines a true Muhle watch, while the generous coating of luminous Super LumiNova on both its indices and its hands guarantees clear readability at all times of day and night and whatever the weather.

Alongside all of its impressive functions, the Teutonia Sport I also likes to look the part and does so in style thanks to the powerful masculine design of its black face. Its three totalisers feature light-grey borders that make them stand out against the dark background and add to the watch's sporty appearance, as does the date located at the 4 o'clock position, an essential feature of such a dynamic time measuring instrument.

The chronograph's sporty and masculine look is underlined by its stopwatch-like buttons and topped off by its attractive bidirectional bezel, with an extra dynamic impact provided by the eye-catching red colour of the watch's central stop-second hand. With so many attractive attributes, the Teutonia looks truly impressive on every wrist. It not only combines a distinctive appearance with complex details representing true craftsmanship, but also embodies the traditional Muhle values, namely precision, robustness and perfect readability.

By introducing this new sporty chronograph to its Teutonia family, Muhle-Glashutte is welcoming a new model that most certainly enjoys being different. While its fellow models are defined by their down-to-earth luxury and elegant radiance, the Teutonia Sport I focuses on being a powerful, dynamic and charismatic athletic companion that lives and breathes its need for speed, but also never strays far from the essential features and characteristics of its Teutonia family.

The new Teutonia Sport I is the perfect sporty solution for anyone who lives life out of the box and preferably in the fast lane!