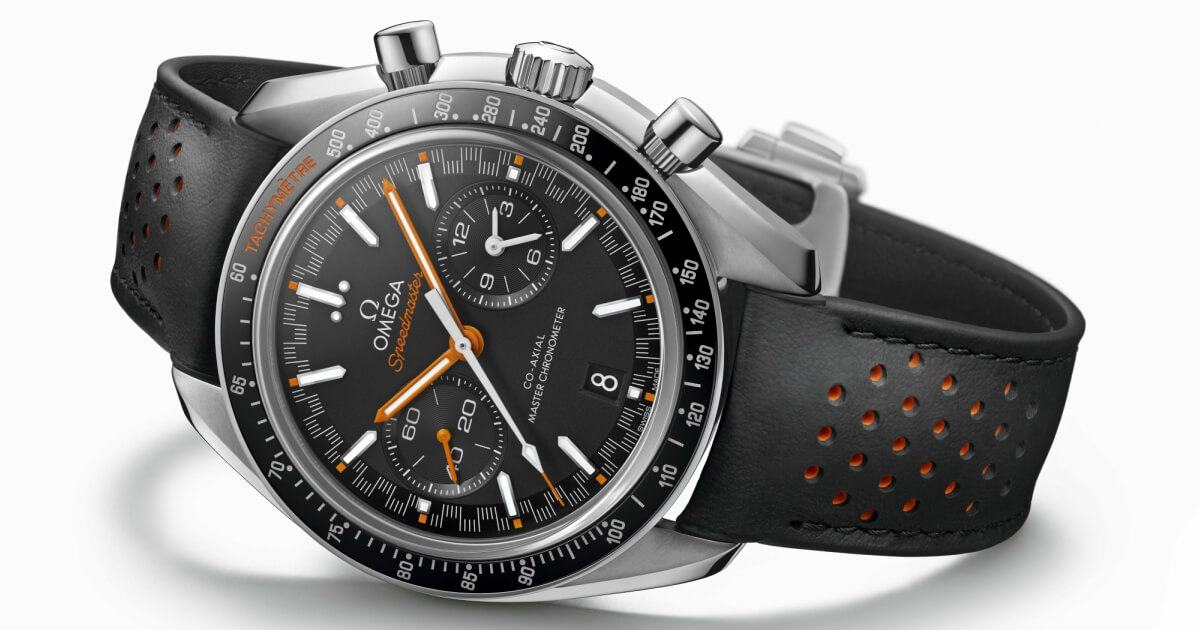 True to OMEGA tradition, every new Speedmaster carries the spirit and design inspiration of the models that came before. In the new Speedmaster Racing Master Chronometer, this is immediately clear when you view the dial. The distinctive minute-track style first appeared on a 1968 Speedmaster model. Linked to the Speedmaster’s motor racing heritage, it returns again alongside other unique and refined features.

The Speedmaster Racing Master Chronometer collection will make its debut in 2017. The first model is stainless steel with a matt-black dial, a polished ceramic bezel with a brushed Liquidmetal tachymeter scale, and distinctive orange wording that matches the colour of the varnished hands and tip of the seconds hand.

The second model has been crafted from 18K Sedna gold. The colour blue is used for the dial, the leather strap, and the ceramic bezel with its Ceragold tachymeter scale.

Both models feature an “alternating” minute-track in a racing style which gives the models their name. This feature links back to early Speedmaster designs from 1968 that provided better readability for the wearer.

Compared to other Speedmasters of the past, it is worth noting that the 44.25 mm case of the new Speedmaster Racing Master Chronometer is thinner than previous versions thanks to the work done on the sapphire crystal in particular.

Other notable features include bevelled arrowhead indexes filled with Super-LumiNova and subdials that have been slightly expanded for improved readability.

On the stainless steel model, there is a black leather strap that contains a section of orange rubber through the middle. A milling tool has then been used to create micro perforations through the constructed strap that reveal the orange rubber inside. This perforated design provides the perfect sporty look and also has the benefit of aerating the wearer’s skin.

These models represent the next Speedmasters with Master Chronometer certification. Driven by the calibre 9900/9901, the watch and its movement have reached the Swiss industry’s highest standard of precision, performance and magnetic resistance, as approved by the Swiss Federal Institute of Meteorology (METAS).