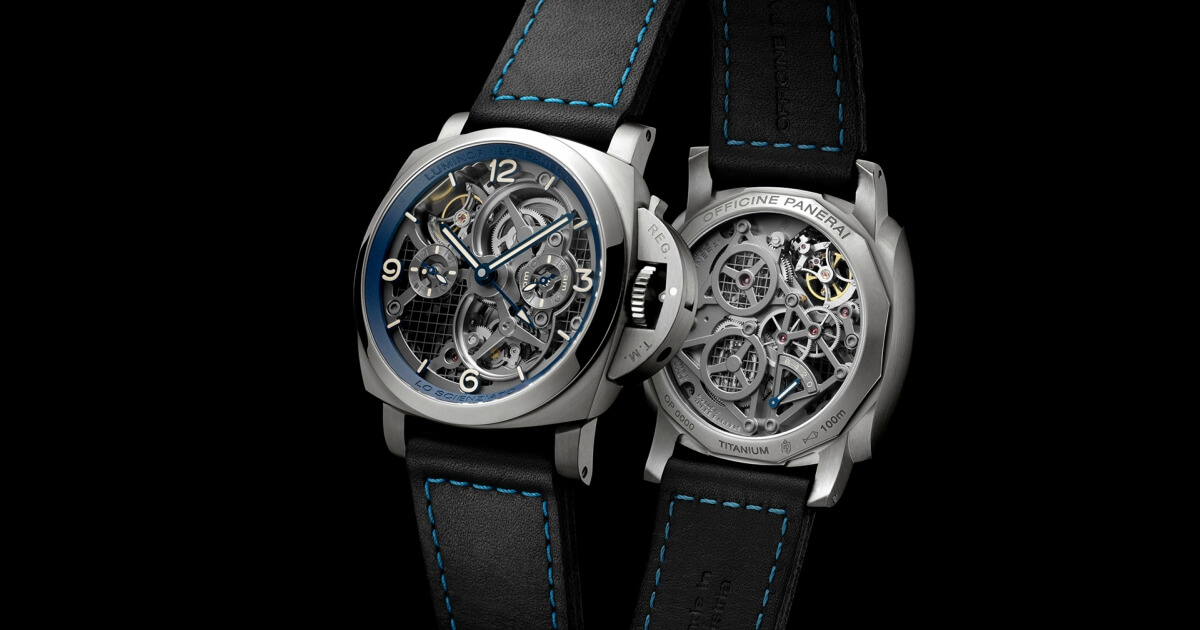 With its titanium case 3D-printed using the technique of Direct Metal Laser Sintering, Lo Scienziato - Luminor 1950 Tourbillon GMT is undoubtedly one of the most innovative and surprising creations of the Panerai Manufacture in Neuchâtel. Presented in 2016 as the first implementation of this technology for a mechanical timepiece, Lo Scienziato is now available in a new version which still has all the characteristics of its predecessor but with a slightly revised appearance. In the new model the blue of the hands, harmonising perfectly with the metallic tones of the titanium case, is also used on the flange and in the sewing of the black leather strap, giving the watch an even sportier appearance, perfect for this creation with such a high level of technical content.

The lightness of the new Lo Scienziato is truly remarkable, particularly considering its wealth of features: hours, minutes, small seconds, GMT with am/pm indication, a power reserve of six days with indication of the power remaining on the back, and a tourbillon escapement. The secret of its lightness lies in the ingenious work of minimalisation carried out by the Laboratorio di Idee of the Panerai Manufacture in Neuchâtel on the case and on the sophisticated P.2005/T movement, to design a watch with the typical Panerai characteristics but with a substantially lower weight.

The Luminor 1950 case has the classic diameter of 47 mm and it is made of titanium, a material that is resistant to corrosion but also about 40% lighter than steel. To reduce the weight further, the case is made using an innovative technology which enables complex geometrical shapes to be created without in any way compromising its water-resistance (10 bar, equivalent to a depth of about 100 metres), its solidity or its resistance to any tension or torsion to which the case may be subjected. The technology used is called Direct Metal Laser Sintering: this process builds up a 3D object layer by layer by means of a fibre optic laser using powdered titanium. The successive layers – each one only 0.02 mm thick – merge together and become completely solid, creating forms which would be impossible to achieve using traditional working methods, lower in weight and with a perfectly uniform, even appearance.

The P.2005/T With Skeletonised Titanium Bridges And Tourbillon

The P.2005 mechanical movement, the hand-wound calibre with the special tourbillon patented by Panerai, appears here for in the P.2005/T version, skeletonised and with titanium bridges and plates. Thanks to the lower density of this material – about half that of the brass of which these components are normally made – the overall weight of the movement is 35% less than that of the P.2005/S skeletonised version.

The ultimate lightness of the watch is both the result of the fine skeletonising of the bridges, plates and spring barrels, and of the absence of a traditional dial, since all the elements which normally comprise it are attached directly to the movement or the flange of the watch, such as the hour markers. At 9 o’clock is the small seconds dial, inside which a small indicator rotates, showing the rotation of the tourbillon. At 3 o’clock, another small dial indicates whether the central second time zone hand (GMT) refers to day or night. The long power reserve of six days is achieved by the three spring barrels connected in series, and the power remaining is shown by a special indicator on the back of the movement, visible through the large sapphire crystal porthole on the back of the watch.

All this fine work of skeletonising enables the fascinating details on both sides of the watch to be admired, such as the winding and unwinding of the spring inside each barrel, the intricate interconnection of the wheel work and in particular the rotation of the tourbillon cage, which, in the version patented by Panerai, is fundamentally different from the normal arrangement. In order to compensate more precisely for the effects of gravity on the escapement, thus achieving more accurate operation, the tourbillon cage rotates on an axis which is perpendicular, not parallel, to that of the balance, and it makes a complete rotation every 30 seconds instead of once a minute.

Panerai Lo Scienziato is a limited edition of 81 pieces and the price will be €139,000.