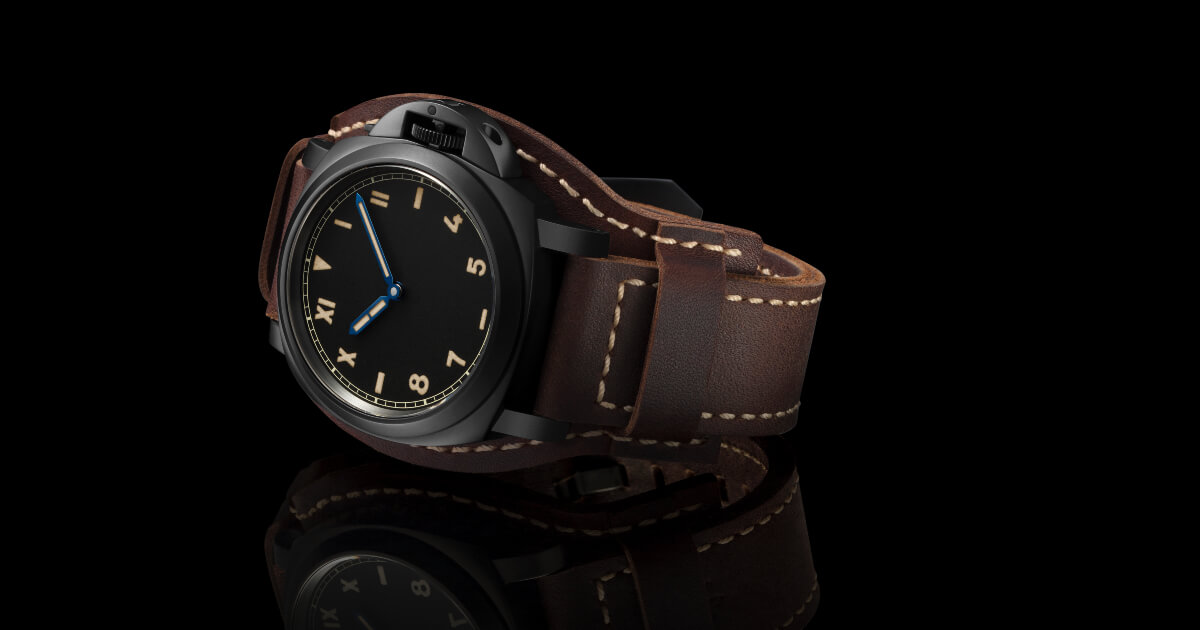 The new Panerai Luminor California 8 Days DLC stands out immediately with its strong, distinctive masculine look, the result of a completely original combination of classic Panerai elements with a new cuff strap which further expresses the personality of the watch.

The watch’s Luminor case (44 mm in diameter) is made of titanium coated with DLC (Diamond- Like Carbon), an even carbon-based layer which gives the metal a uniform appearance, with a matt anthracite finish and greater hardness, resistant to scratches and corrosion. The bridge lever device which protects the winding crown is also coated in DLC and it contributes to the watch’s high degree of water-resistance: 30 bar (a depth of about 300 metres).

The Luminor case houses a simple, fascinating black California dial: that original combination of graphic markers with Roman and Arabic numerals which was originally used by Panerai on some of its earliest dials. In a watch with a decidedly sporty character, the hour and minute hands are particularly sophisticated, having been oxidized at a controlled temperature (290-300 °C) to achieve a particular metallic blue which again is reminiscent of some historic Panerai models.

The strap of untreated leather combines great strength with a soft, natural effect, both to the touch and to the eye, and its varied patina, modified by use and the passage of time, makes each example unique. It can be worn in its basic version or as a cuff strap, using the accessory supplied, originally designed for military use, which prevents the back of the watch coming into contact with the skin. Both the strap and the cuff strap are personalized with contrasting beige stitching and the heat stamped OP logo, and they are fitted with a DLC-coated buckle. A black rubber strap is also included in the box.

The Luminor California 8 Days DLC (PAM00779) uses the hand-wound P.5000 calibre, a movement entirely developed and produced in the Manufacture in Neuchâtel with a long power reserve of eight days, inspired some of the historic watches created by Panerai for the frogmen of Italian Navy. It is 153⁄4 lignes in diameter and 4.5 mm thick, very solidly constructed and fitted with a large brush-finished plate with diamond polished chamfering; this almost completely conceals the wheelwork, while revealing the balance which oscillates at a frequency of 21,600 vibrations per hour. The long power reserve is achieved by two spring barrels connected in series.