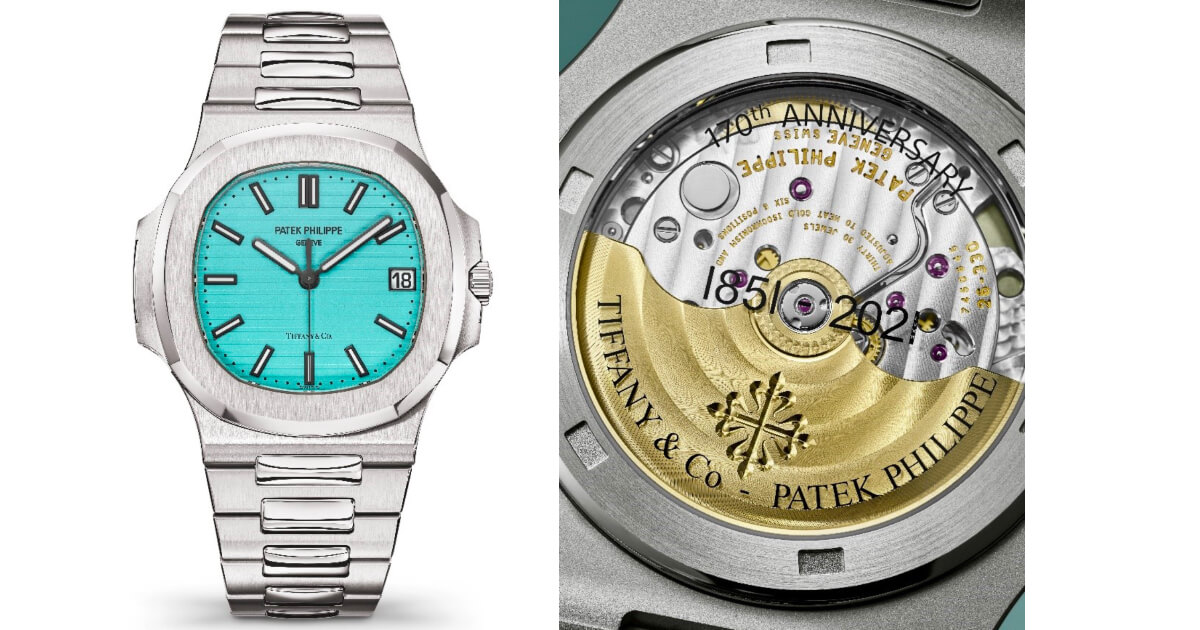 To celebrate their partnership, Patek Philippe has developed a limited-edition of Nautilus wristwatches made of steel endowed with the well-known Tiffany Blue dials. As an unique characteristic we have, on this timepiece, a dual stamping of both companies, "Tiffany & Co." and Patek Philippe, the first one at 6 o'clock and the second one at 12 o'clock. The casually elegant icon was first used in 2006 and 2022 represents the end of it, as it will no longer be used in the collection.

To apply a satin-finish to the watch and polish the links all by hand, Patek Philippe has a process of 55 steps. The rugged case is designed to have a 120 m water resistant.

The Nautilus Ref. 5711/1A-018 “Tiffany & Co.” is powered by the PP in house calibre 26-330 S C. This is an automatic movement, with a stop-seconds mechanism, which lets you to the watch with one second accuracy.

On the back of the watch you will have a sapphire-crystal with the inscription "170th Anniversary 1851-2021 Tiffany & Co. - Patek Philippe".

This timepiece shall be available in only 170 units to be sold exclusively in the Tiffany boutiques in San Francisco, Beverly Hills and New York. On December 11th Tiffany & Co. shall auction off one of the commemorative watches while 100% of proceeds shall go to The Nature Conservancy, an environmental organization with activity worldwide.

The two companies, Patek Philippe and Tiffany & Co. were founded virtually in the same period, with only two years difference (1839 vs 1837). From the very beginning, the Genevan watch manufacture and the American jeweller have shared common values: the struggle for perfection, a dedication for artisanal skills and the highest appreciation for customers.

In 1851, Patek Philippe and Tiffany & Co. signed an agreement that made the latter Patek Philippe’s first official retail partner in the U.S. market. During Antoine Norbert de Patek’s first business trip to America, he reasserted the special importance of the relationship and took time to pay a visit, in New York, to Charles Lewis Tiffany. On his departure, he was impressed by the business volume of Tiffany & Co. and by leaving with an order of not less than 150 watches.

In 1876, a new agreement was signed appointing Tiffany & Co. the general representative in the United States. In turn, Patek Philippe pledged to safeguard its partner’s interests as proved by the huge lettering on the façade of its historic headquarters facing the Grand Quai - "Agents for Tiffany & Co., New York". Further proof of the well-grounded transatlantic relationship is provided on the premises of Patek Philippe Salons in Geneva, i.e. a large steel vault previously owned by Tiffany & Co. and decorated with an American eagle with two flags.

From 1900 to 1930, Tiffany & Co. also had a leading role in the relationships between Patek Philippe and American watch collectors among which Henry Graves Junior for whom Patek Philippe manufactured a full range of complicated watches. In 1946, the grandfather of Thierry Stern, the current president of Patek Philippe, created Henri Stern Watch Agency located in New York which took further the successful partnership.

In 2008, Patek Philippe strengthened its relationship with the overseas jeweller and opened a boutique on Fifth Avenue within Tiffany retail venue where one can admire the manufacture's complete current collection.

In the last two decades, Patek Philippe created some limited special editions for its American partner; they refer to important dates in their history and bear dual stamps for both companies. Today, Tiffany & Co. is the sole retailer in the world whose name is engraved on a Patek Philippe dial, making these timepieces highly desired by collectors.

Ref. 5150 Annual Calendar was launched in 2001 in order to celebrate 150 years of partnership between the two partners, being the first limited edition manufactured by Patek Philippe for a U.S. retailer. As a special characteristic, the month sign was shown as a numeral. Only 450 watches were created: 150 in yellow gold, 150 in rose gold and 150 in white gold.

Presented on the occasion of the first anniversary of the Boutique Patek Philippe opened within Tiffany & Co. venue on Fifth Avenue in 2009, this ladies' wristwatch with a two-row diamond setting and an art deco inspiration, featured a tonneau case and a guilloched dial decorated. Of the only 100 pieces ever crated, 50 watches have white dial and 50 a black one.

Launched in 2012 for the fifth anniversary of the Boutique Patek Philippe opened within Tiffany & Co. venue on Fifth Avenue (2013), this art deco-inspired Gondolo ladies’ timepiece has a slightly cambered tonneau-shaped case provided with two rows of diamonds and large Roman numerals. This wristwatch edition was limited to 50 watches, 25 with a blue sunburst dial and 25 with a mother-of-pearl one.

A men's watch in white gold with an Annual Calendar created in a limited edition of 100 timepieces. The day of the week as well as the month are displayed in a double aperture at 12 o'clock and has an analogue date at 6 o'clock. It features an engraved inscription "Patek Philippe - A Shared Vision – 2008 - 2013” on the back that commemorates the fifth anniversary of Patek Philippe Boutique at Tiffany & Co. venue in New York.