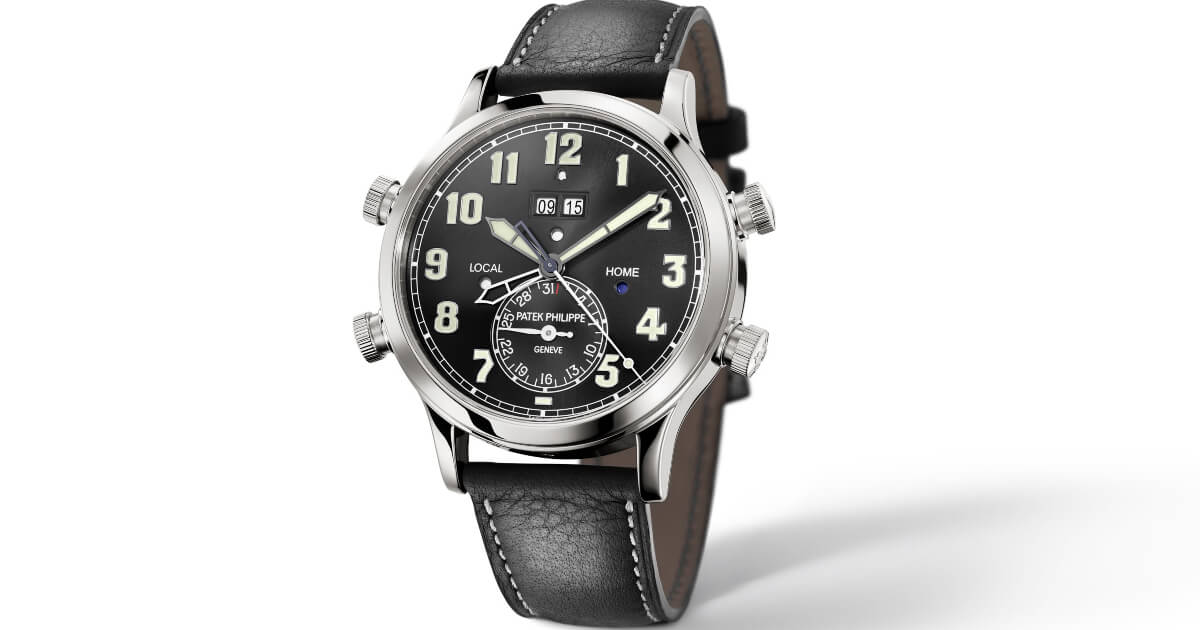 Patek Philippe is unveiling a new self-winding grand complication that adds a 24-hour alarm to its exclusive Travel Time display with two time zones; the alarm signal is struck by a hammer on a classic gong. To achieve this, the manufacture created a totally new integrated movement. Four patent applications were filed for the alarm mechanism. It is the result of five years of development work. The new caliber is presented in an elegant platinum case that reflects the Pilot Travel Time design.

For 180 years, Patek Philippe has been upholding the finest principles of horological artistry, emphasizing performance, reliability, and functionality. With its creations, the manufacture spares no effort to deliver maximum complexity in the smallest possible diameter and height. It also stresses simple and safe operability of each complication, no matter how elaborate it might be. The new Ref. 5520P-001 Alarm Travel Time embodies this ambitious objective with aplomb.

When Patek Philippe’s engineers were asked to develop a new alarm mechanism and to combine it with the Travel Time concept’s two-time-zone arrangement, one objective was to make the watch as thin as possible. Thus, they opted for an integrated movement which requires less height than a caliber with an additional module but is also much more difficult to design and produce. They also wanted this new grand complication to be easily operable, intuitively functional, and protected against incorrect handling. In brief: They wanted it to be an intelligent watch.

That was the starting point for the new caliber AL 30-660 S C FUS, a movement composed of 574 parts and conceived explicitly for this timepiece. This highly complex self-winding movement has a central rotor; it is 31 mm in diameter and 6.6 mm high. Its Gyromax balance features a Spiromax balance spring made of Silinvar, a derivative of silicon. The unique properties of this avant-garde material and the patented geometry of the hairspring assure superb reliability and extreme rate accuracy pursuant to the directives of the Patek Philippe Seal that prescribes a maximum tolerance of -3/+2 seconds per day.

The movement has a stop-seconds mechanism that allows the time to be set with one-second accuracy. A sapphire- crystal display back reveals the refined architecture and exquisite finissage of the movement, including chamfered and polished bridge edges, a 21K gold rotor with new rounded recesses, and the decorative Genevan circular graining pattern.

Introduced in 1997, the exclusive Travel Time function stands out with its ingenious two-time-zone system. The watch has two hour hands from the center. One is skeletonized and displays home time. The other is filled and indicates the local time at the owner’s current location. These hour hands are paired with two day/night indicators (blue-white) in small round apertures – at 3:30 for home time

(HOME) and at 8:30 for local time (LOCAL). On the go, all it takes is the actuation of the pushers in the left-hand case flank to adjust the local time clockwise in one-hour increments (pusher at 8 o'clock) or counterclockwise (pusher at 10 o'clock). The intelligent concept of the time-zone mechanism prevents the rate accuracy of the watch from being affected when traveling across time zones. To simplify adjustments, the pushers are embossed with the symbols + and –. Before a pusher can be actuated, it must be unlocked with a quarter turn, easily accomplished thanks to the fluting; a quarter turn in the opposite direction locks the pusher again. The watch remains water-resistant even when the pushers are unlocked. The analog date with the subsidiary dial in the lower half of the dial is synchronized with local time. Therefore, it automatically increments or decrements when the local-time hour hand is moved forward or backward past midnight. An interesting detail: When both hour hands indicate the same time zone, the local-time hour hand is superposed on the home-time hour hand.

To create a useful travel watch, Patek Philippe combined the two time zones with an alarm that like the date is coupled with local time. The alarm function is not a new feature for the manufacture. A wake-up alarm struck on a fifth gong was one of the 33 complications of the famous Calibre 89, for 25 years the world’s most complicated portable timepiece. For Patek Philippe’s Grandmaster Chime launched in 2014, the manufacture presented five strikework functions including an alarm. A global debut, it strikes the preset alarm time with the same tone sequences as those sounded by the minute repeater.

Now, for the new Ref. 5520P-001 Alarm Travel Time, the manufacture also chose an alarm concept that features a classic gong. When the alarm is triggered, a hammer (visible through the display back) strikes a gong that circles the movement for up to 40 seconds with a frequency of 2.5 Hz (2.5 strikes per second). This is equivalent to about 90 strikes in total. As in the minute repeaters, a centrifugal governor beneath a bridge with the Calatrava cross assures a regular and sustained striking cadence. The alarm mechanism has its own, separate spring barrel that is tensioned with a crown at 4 o'clock. A built-in clutch prevents inadvertent overtightening. A noteworthy detail: the new Ref. 5520P-001 Alarm Travel Time is Patek Philippe’s first chiming timepiece with a water-resistant case – a big asset for people who travel to countries with moist tropical climates. To assure maximum sound quality, the gong is attached directly to the caseband and not to the movement as usual. This reduces the attenuation of the sound waves by the water-resistant case.

Apart from superb acoustic quality on par with Patek Philippe’s finest chiming watches, the new Ref. 5520 also stands out with its remarkable user-friendliness and the logic of its functions for which a patent registration has been filed. The engineers achieved this level of convenience with a double column wheel that controls all functions.

The alarm function indications are arranged in the upper half of the dial. To assure optimal legibility, the manufacture chose a digital display for the alarm time, a patent-pending solution. The programmed alarm time is displayed in a double aperture beneath the 12 o'clock position. Directly underneath it is the round aperture with the day/night indicator in white for the time from 6 am to 6 pm and blue for 6 pm to 6 am. The crown at 4 o'clock must be pulled out to its intermediate position to adjust the alarm time in 15-minute steps by turning it in either direction. The display mechanism for the alarm time in hours and minutes drives a differential gear that constantly compares the preset alarm time with the current local time. A system that offsets mechanical play makes it possible to set the alarm strike with one-minute accuracy to the next quarter hour. For instance, at 12:14, the alarm can be set to 12:15. A patent application has been filed for this mechanism.

The pusher at 2 o'clock turns the alarm ON or OFF. The small bell-shaped aperture directly beneath 12 o'clock indicates the status: white for alarm ON and black for alarm OFF. The respective pusher is embossed with a small bell symbol that has the same shape as the alarm ON/OFF indicator aperture. This pusher is endowed with the same interlock device as the two time-zone pushers.

The system that controls and monitors the alarm function is also equipped with the safety and isolation mechanisms that assure trouble-free functionality and exclude the danger of damage to the movement as a result of incorrect manipulation. As soon as the alarm has stopped sounding, the ON/OFF indicator automatically switches to OFF. Now, the alarm cannot be set again before the strikework spring barrel has been fully rewound. For this reason, the alarm mechanism must always be able to sample the state of wind of the spring. This calls for a complex device with a finger on the strikework barrel axis. Its angular position defines the power reserve and only releases the ON status after it has been fully wound. Switching to the OFF status is possible at any time, however. The user can transit to another time zone without any risk, even while the alarm is sounding. In this case, the mechanism merely interrupts the strike sequence and sets the alarm to OFF. The alarm strike is also deactivated when a new alarm time is programmed. The strikework spring is tensioned by rotating the crown at 4 o'clock in the clockwise direction. It is fitted with a clutch that prevents the alarm from being blocked if the spring is overtensioned. Additionally, a patent-pending system deactivates the alarm spring winding device when the alarm display shows ON. The mainspring barrel can be wound at any time with the same crown, but by rotating it in the counterclockwise direction.

At first sight, the Ref. 5520P-001 Alarm Travel Time is reminiscent of another Patek Philippe watch launched in 2015: the Calatrava Pilot Travel Time. Inspired by the heyday of aviation, that model has two time zones and is currently available in two versions ... as the Ref. 5524 men’s wristwatch and the Ref. 7234 for ladies. Patek Philippe adopted the characteristic aviators’ style of the case as well as the nearly identical dimensions. This was possible even though the new movement is much more complex. With a tremendous effort, the engineers were able to further miniaturize the components and subassemblies.

With a diameter of 42.2 mm and a height of 11.57 mm as well as an integrated bezel and integrated lugs, the case is cold-formed with a high-tonnage press from a blank in platinum, the most precious noble metal but also the one that is most difficult to machine. The forming process is followed by precision machining as well as painstaking and elaborate polishing in the manufacture’s ateliers. The smooth bezel is slightly beveled while the caseband elegantly merges with the slightly curved lugs. Like all Patek Philippe platinum watches, the Alarm Travel Time is set with a diamond in the case flank at 6 o'clock.

With its technical appeal and elegance, the dial assures optimized readability and underscores its provenance in the aviators’ watch segment. The large applied Arabic numerals and the broad baton hands – all in white gold with a white Superluminova coating – contrast well against the sunburst ebony black background. The skeletonized home-time hour hand rotates discretely on a second plane, as is the case with all Travel Time watches. The slender white seconds hand moves its tip along a railway-track minute scale with five-minute dots coated with Superluminova. The small white hand in the subdial at 6 o'clock indicates the date along a scale from 1 to 31; the “1” is red to accentuate the first day of a month. A thin, flat sapphire-crystal glass improves the sonority of the alarm melody. In the interest of visual balance, the crown at 4 o'clock has the same design as the three fluted crowns but does not need a safety interlock. Patek Philippe uses a system of transmission levers to harmonize the symmetry and height of the pushers and crowns and making sure they are in the middle of the caseband. The watch is worn on a matte black calfskin strap with contrast stitching that matches the dial. The strap is secured with a platinum clevis prong buckle; its design is reserved for aviators’ timepieces.

As the quintessential watch for globetrotters, the new Ref. 5520P-001 Alarm Travel Time, featuring an innovative alarm mechanism and two time zones, is the perfect expression of Patek Philippe’s tradition of innovation – an ongoing quest to improve the functionality and dependability of its timepieces while endowing them with timeless beauty.

• Pushed in: To wind alarm spring clockwise, to wind mainspring

• Pulled halfway out: To set the alarm time in either direction in 15-minute steps

• Pulled all the way out: To set the time in either direction, with balance stop

Corrector: Date between 6 and 7 o'clock