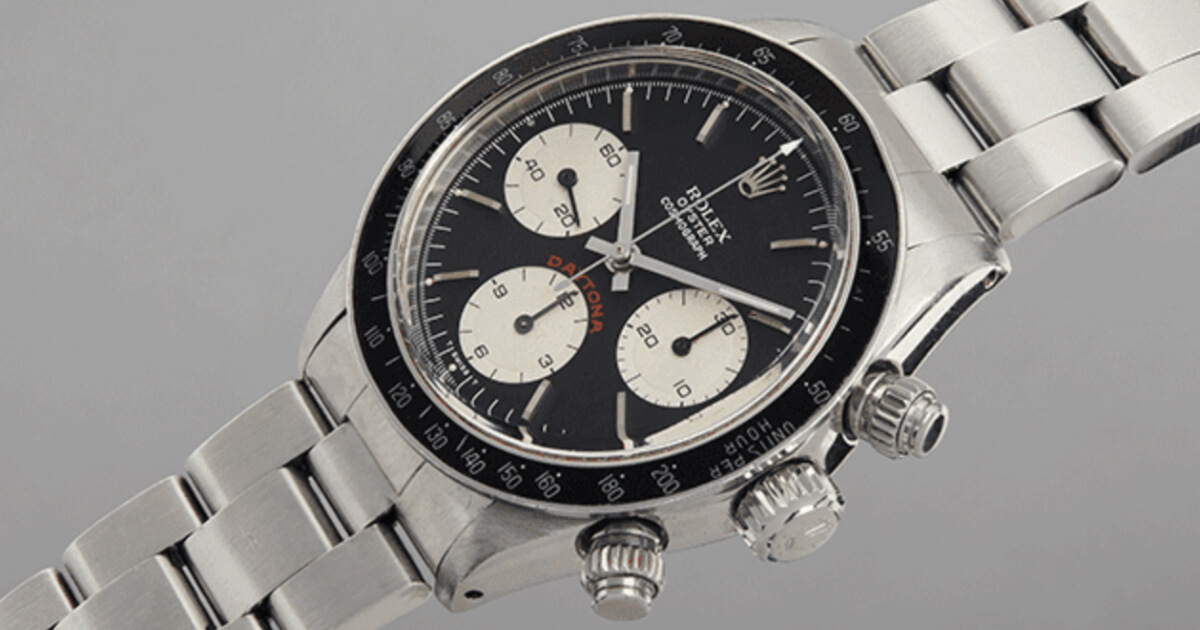 Racing Pulse, Phillips’ final 2020 auction held in New York, realized $27,584,570 on Saturday, 12 December, selling 99% by lot and 99.5% by value, an industry-leading sell-through rate. With Aurel Bacs conducting the sale live from London and broadcast across the globe, the sale was led by Paul Newman’s Rolex “Big Red” Daytona, which sold for $5,475,000 to an anonymous private collector, marking the third highest price ever for a Rolex watch at auction.

The sale also set a record price for any Heuer timepiece, with the iconic Monaco worn by Steve McQueen in the film Le Mans and gifted to his personal mechanic, Haig Alltounian, selling for $2.2 million.

Vintage and modern Patek Philippe wristwatches also achieved exceptional results. A modern Ref. 3974G minute repeater with perpetual calendar, one of only 5 known, achieved a remarkable $1,022,200, and a vintage Ref. 3448 perpetual calendar, nicknamed the “Pristine Padellone” and consigned by the family of the original owner, achieved $529,200.

Phillips is also proud to announce that $2.1 million was raised for the One Drop Foundation and the Prince Albert II of Monaco Foundation through the Time Counts initiative.

Paul Boutros, Phillips’ Head of Watches, Americas, said, “Our commitment to offering highest quality timepieces from the world’s leading brands has proven to be a recipe for success. This year, we had the incredible opportunity to work with a truly stellar group of consignors, whose extraordinary watches elevated our December sale to unparalleled heights. From Clea Newman’s Rolex, to Sylvester Stallone’s Panerai and Richard Milles, to Haig Alltounian’s Heuer, gifted to him by Steve McQueen, we saw fierce competition for these unique and historically important pieces. It was also our privilege to work with the One Drop Foundation and the Prince Albert II of Monaco Foundation this season in helping to raise funds for their lifesaving work. We are so grateful to all who donated and bid on the exceptional group of lots, whose proceeds will create truly important and lasting change.”

Aurel Bacs, Phillips’ Senior Consultant, added, “The market for watches has never been stronger, as evidenced by the tremendous enthusiasm we have seen in RACING PULSE, with registrants across 60 countries vying for these exceptional timepieces. With the digital innovations Phillips has made over the last several months, the auction world has been transformed, as we were able to broadcast our sale to phone bidders in New York and London, as well as online bidders across the globe. Despite all the uncertainty we witnessed with the events of 2020, the insatiable international demand has led the Phillips Watches team see our most successful year ever, with an annual total of over $133 million.”

Five lots from the personal collection of Sylvester Stallone also saw enthusiastic bidding across the board, with his Panerai Luminor achieving $214,200. Worn during the filming of Daylight, this watch is the most important modern Panerai wristwatch to ever be sold publicly, as it led to the brand’s modern-day renaissance. His selection of pieces by Richard Mille all soared past estimate, most notably the Ref. RM52-01, which realized $998,000.

Once again, independent watchmakers performed very strongly, with impressive results for F.P.Journe, with an early Chronomètre a Résonance “Souscription” achieving $403,200 and an early Tourbillon Souverain in 18 karat pink gold achieving $378,000.

Time Counts, a collaborative initiative with Phillips, the One Drop Foundation, and the Prince Albert II of Monaco Foundation, raised $2,107,350 through the sale of twelve lots that were generously donated by celebrated personalities, including the One Drop Foundation’s founder, Guy Laliberté, H.S.H. Prince Albert II of Monaco, U2’s Bono, former Formula One racing champions Sir Jackie Stewart and David Coulthard, and Kevin “Mr. Wonderful” O’Leary. Leading the group were two Audemars Piguet Royal Oak Grande Complications, one in stainless steel and one in pink gold, which each realized $504,000. All net proceeds from the TIME COUNTS charitable initiative will be used to bring positive change in the water and sanitation sectors and work towards improving climate resilience for some of the world's most vulnerable communities.