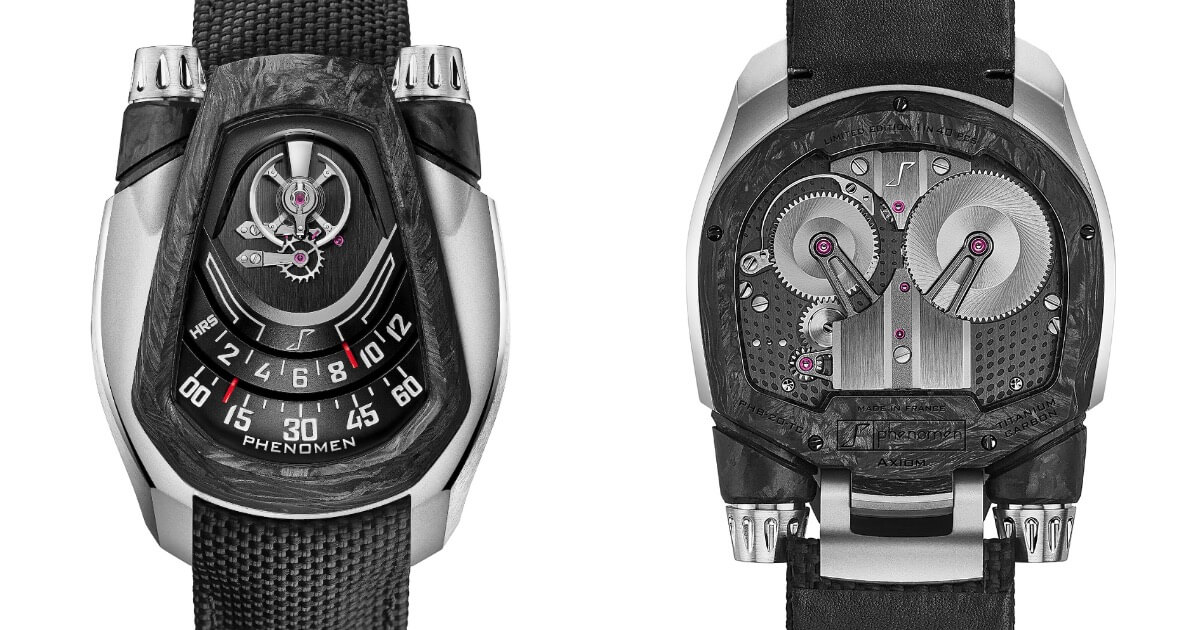 The Titanium/Carbon Axiom is the second incarnation of Phenomen’s flagship model. Innovative combinations of materials and new finishes further reveal the potential of the new independent fine watchmakers’ atypical timepiece.

It all began with a study in materials: a sketch, a 3D model, and then tests with the materials themselves. The Titanium/Carbon Axiom was simply the natural outworking of that process: unexpected, yet obvious; both surprising and wholly original.

“Collectors who expressed an interest were captivated by the Axiom, but hadn’t really grasped the full measure of its body and shape,”explains Alexandre Meyer, founding CEO of the Besançon-based firm. “The curves and proportions are so subtly crafted that it was virtually impossible for a photograph to do justice to them. With that in mind, we strove to come up with a new combination of materials that makes them stand out more.”

The Titanium/Carbon Axiom’s new livery reveals it exactly as it looks on the wrist: sculptural, powerful, and unique. The use of carbon for the bezel emphasises its singular geometry – an inclined part whose manufacture is highly complex, designed to allow a broad aperture and optimised readability. The moiré finish of the carbon adds a unique touch – no two Titanium/Carbon Axioms will be exactly alike.

The case’s multiple finishing serves to underscore all the design work that’s gone into producing the Axiom’s one-of-a-kind aesthetics. The long, graceful sides denote the case’s vanishing lines, extending out to the strap and beyond it, the wrist. Between the bezel and frame, sand-blasted titanium supplies the gentlest of transitions between the mirror-polished edges of the case itself and the dark carbon ornamentation above. The same composition is also to be found on the two setting crowns: polished titanium arches set in an elongated crown, atop a carbon barrel.

The dial of the timepiece takes up the same counterpoint theme, with alternating light and dark tones and polished and satin-effect finishing, using the effect to provide optimum readability. The hours, in white on a black background, are read off the upper area, and indicated by a red marker. The same layout is used for the minutes, in the lower area; both indicators are retrograde.

The balance wheel, the Axiom’s signature touch, sits in pride of place at the top of the dial. Its bridges feature a satin finish, while its edges are mirror-polished by hand in the purest Fine Watchmaking tradition. The assembly stands out on a dedicated baseplate that epitomises the whole: black as carbon, coupled with a vertical, titanium-like satin finish.

The real magic of the timepiece resides in the position of the escapement mounting which reigns in splendor at 12 o’clock – and does so without any visible link to the rest of the movement. The variable inertia balance wheel is adjusted using four weights. Rather than being circular, the balance wheel felloe is cut in the shape of a Celtic axe head.

AXIOM boasts an original, direct time display. Confined within a 100-degree span, this allows the human eye to capture the information immediately, with no need to take in the entire 360 degrees of a traditional display. To achieve this tour de force, the PH-010 calibre as to give birth to hand from the inside of the calibre and force them to bend two times to find a path over the dial.

The information follows a structured, two-level hierarchy, ensuring a constantly unobstructed view of the time, since the hour and minute hands never overlap. Both indications are retrograde, providing overall style consistency; the hour display, meanwhile, is not only retrograde but also jumping.

This new, ultra-exclusive finishing will be provided on just 40 timepieces. Unwaveringly committed to its exacting quality standards, Phenomen will be producing just two pieces a month – and in the past few days, the very first ones have become available.

·     Independent correction of hours and minutes

·     Cockpit upper sapphire crystal with non-reflective coating on both sides

The price for the Phenomen Titanium/Carbon Axiom is €64,000.