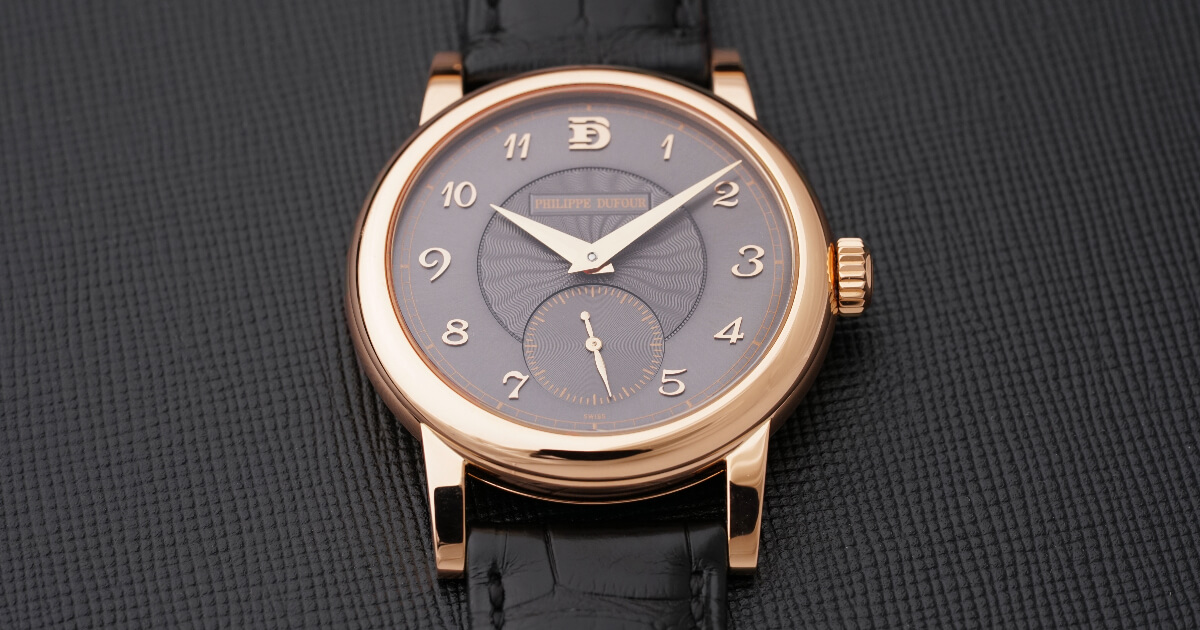 Phillips in Association with Bacs & Russo announced the sale of a Philippe Dufour Simplicity 20th Anniversary model in rose gold number 00/20, to be offered in Retrospective: 2000-2020, a themed auction curated by Phillips & Blackbird. The auction will take place at La Réserve Hotel in Geneva on 8 November 2020.

It is extraordinary that 30 years after creating his first Grande & Petite Sonnerie pocket watch, Philippe Dufour has made less than 230 watches, less than 8 watches a year. Among the most elite Swiss watchmakers to be operating today, the watches Dufour creates by hand are of incomparable beauty and quality, infused with passion and love. An extremely talented and passionate watchmaker, he is an ardent defender of traditional watchmaking that he considers a dying art. Dufour’s watches are considered masterpieces, coveted and treasured by collectors, making them extremely difficult to obtain as they rarely appear on the market.

Alex Ghotbi, Head of Watches Continental Europe & Middle East and Thomas Perazzi, Head of Watches Asia declared: “Rarely does a watchmaker singlehandedly and so perfectly represent a horological genre that has gone from being reserved to the cognoscenti to a category that is boxing in the same league as the power players: independent watchmaking. The present Simplicity offers a watch made of the same fabric as collectors’ dreams, it is an opportunity to obtain one of the rarest, most important and most sought-after timepieces created by a living legend.”

An independent watchmaker since the late 1970s, Dufour restored antique and vintage timepieces for ten years, until he went on to develop a very small series of pocket and wrist Grande Sonnerie watches, followed by the Duality, the world’s first wristwatch incorporating a double escapement. In 2000, having exemplified such talent and expertise for creating ultra-complicated mechanisms, Dufour set out on the challenging task of creating a simple three hand watch, aptly named Simplicity. With a movement architecture designed specially by the maker himself, Dufour achieved a hand finish and decoration that modern horology had not yet witnessed.

For the 20th anniversary of the launch of the Simplicity, Dufour has decided to close the Simplicity adventure with a limited edition (a first for Dufour) of 20 pieces of which Phillips has the honor of offering number 00/20. This piece will also be the very first one on the market to be delivered. Dufour will be making the Anniversary Simplicity in 7 pieces in pink gold, 7 pieces in white gold, and 7 pieces in platinum of which he will be keeping a piece for himself.

With the world’s greatest collectors identifying a modern masterpiece and icon, Dufour’s quota of approximately 200 movements was rapidly reached, and those lucky enough to have been able to order a Simplicity had to wait many years before delivery, with others having to wait for a piece to appear on the secondary market.

The Anniversary model is slightly different from the other Simplicity models. Keeping with the original elegant 37mm diameter, the case has been slightly modified to include a hinged back. In addition, the crown now has his initials PD engraved on it, initials that can be found at 12 o’clock, applied on the beautifully guilloché grey dial with Breguet numerals. However, as is the case with Dufour, the movement is the star. The gentle flow of the bridges’ curves, the bold and alluring inward and outward angles, the hand applied Geneva waves and red rubies provide a seductive visual harmony. Needless to say, that the decoration and assembly are done by hand.

Philippe Dufour is both one of the world’s finest watchmakers and a passionate ambassador for preserving and promoting the art and the craft of “haute horlogerie”.

Philippe Dufour was born in 1948. He grew up in the rural village in the Vallée de Joux, in Switzerland, where he still lives and works today. When he was fifteen years old, his parents told him that they could not afford to support him furthering his studies away from home, so he would have to find something local. He went to the Technical School of the Vallée de Joux to train as a mechanic. Head and hands worked well together, but mathematics was not his strong suit. He was told he was just good at watchmaking, a path he followed. In fact, he didn’t choose his profession. In 1967, it was the revelation. After four years, he obtained his certificate of "EHS watchmaker repairer with distinction".

Dufour then accepted an offer from Jaeger-LeCoultre, still located in the region and was sent to Germany. Eager to see the world, he went to work in England and then in the Caribbean, before returning to Switzerland in 1974 to then work for Gérald Genta and Audemars Piguet. In 1978, he set up on his own as an independent, specializing in the restoration of old and complicated watches of great value and made five Grande and Petite Sonnerie pocket watches for Audemars Piguet.

After having had enough of working for the others, in 1992, he did what nobody had ever done: “The Grande et Petite Sonnerie, minute repeater, wristwatch”, for which he won the gold medal of the technical innovation at the world watch and jewellery fair in Basel. In 1996, he presented to the world the first dual regulator wristwatch in history: The Duality, which won him the special jury prize for "Montres and Passion still in 1996".

Finally, in 2000, he offered a model without complications whose name sums up the intention and the philosophy: The Simplicity. Philippe Dufour belongs to an elite category of watchmakers who still manufacture all the components of their watches themselves. Rather modest in his work, he proudly defends his philosophy. “Transparent” is the key word: “It’s essential for me to establish a transparent relationship with those who acquire my watches. I want to be able to assure them that they won't find this movement anywhere else. I’m certainly very proud to put my name on the face of a watch, but I will only do it if it’s my job inside. I made a red line for myself and I follow it. The value of my timepieces is in the handwork and the craftsmanship. I put a part of myself in my watches, and the owners can feel that.”

Since June 2018, Philippe Dufour has been secretly working with one of the world's greatest watch collectors, his long-time friend Claude Sfeir. Together, they are developing an astonishing project that defies all superlatives, combining the highest level of Haute Horlogerie with the highest level of Haute Joaillerie. Two Métiers d'Art sublimated into an exceptional unique watch, the one of all records in the history of watchmaking. It is quite simply named the “Simplicity C..."