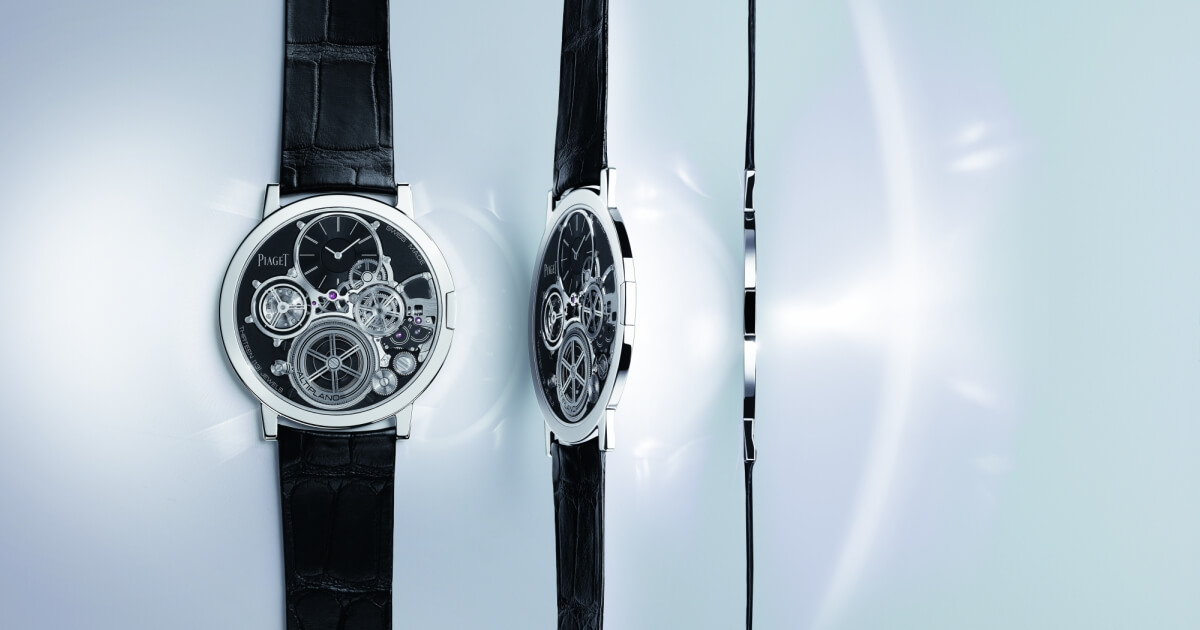 Piaget is establishing two world records setting the crowning touch to the 60th anniversary celebrations of its iconic Altiplano collection. The first with the Altiplano Ultimate Automatic, the world’s thinnest self-winding watch at just 4.30mm thick. The second with the Altiplano Ultimate Concept, developed by the Piaget “Research and Innovation” division: the world’s thinnest mechanical hand-wound watch at just 2mm thick, the same size as the historical movement – Calibre 9P – to which it pays eloquent tribute.

Piaget was born in 1874 as a movement manufacturer in the village of La Côte-aux-Fées, before becoming an internationally renowned brand. In 1957 Piaget launch the hand-wound Calibre 9P. One of the world’s thinnest mechanical movements of that period at just 2mm thick, this now legendary calibre enabled the brand to distinguish itself both in the realm of ultra-thin watchmaking, as well as through the emergence of a unique style: that of the eminently pure and elegant Altiplano. While Calibre 9P was to have a decisive influence on the watch industry, the new movement on which Valentin Piaget was working would fully establish the reputation of the Maison. The 2.3mm thick Calibre 12P unveiled at the 1960 Basel Fair was a milestone in watchmaking history: the world’s thinnest self- winding movement at the time.

To save precious tenths of a millimetre, this exceptional timepiece called for the use of a new ultra-rigid and robust cobalt-based high-tech alloy enabling the watch not to buckle despite its extreme slenderness. The model picks up the “2 in 1” structure characterising the Altiplano Ultimate collection that erases the distinction between movement and watch exterior, since the case is both an exterior component and the movement baseplate. All the elements of the calibre and case have been rethought, designed and developed with a view to achieving extreme slimness, with some wheels measuring just 0.12mm thick (compared with 0.20mm on a traditional movement). Within this mechanism, tolerances are measured in hundredths of a millimetre, meaning that the artisans and watchmakers must display the kind of deftness acquired only by years of practice. The thickness of the watch crystal has also been reduced to just 0.2mm as against 1mm for a standard watch. But above all, five patents have been filed for the technological innovations featured in the Altiplano Ultimate Concept. The inverted movement that contributes to the distinctive aesthetic of the Altiplano Ultimate enables a clear view of the various elements well deserving of this patent protection.

At 9 o’clock, mounted on a ball-bearing mechanism fitted directly on the frame, the construction of the regulating organ has been entirely redesigned. The balance- wheel bridge has vanished, as has the traditional structure in which the regulating organ is mounted on incabloc shock absorbers. The balance-staff, the inner ring of the ballbearing mechanism and the roller form an indivisible whole. Within this layout, the balance wheel and spring are pinned up to the collet and inverted, meaning that the balance wheel appears above the balance-spring, whereas the latter is usually pinned up to the collet. The absence of an index assembly is compensated by an adjustable balance-spring stud. This set of solutions enables a significant reduction in the thickness of the regulating organ, while guaranteeing its precision and its isochronism.

At 6 o’clock, the innovatively designed barrel also features a special and distinctive construction. It has no cover and no drum. The ballbearing-mounted mainspring is directly integrated within the frame. Guided on the outside by the ballbearing mechanism, it transmits its energy via the latter’s inner ring. The ratchet-

wheel and core of the barrel arbor are all of a piece and close off the top of the barrel. This technical construction also ensures that this movement component is compact and thus contributes to the overall thinness. It also serves to avoid reducing the autonomy of the movement, enabling the Altiplano Ultimate Concept to offer a generous 44-hour power reserve.

At 3 o’clock, the control device has also been revisited. Its design enables selective control of a time-setting and winding device or of any other mechanism relating to a function, such as a date or moon-phase corrector that might in due course be added to this type of construction. This is a major innovation opening up whole new vistas in the field of ultra-thinness as applied to complication watches. More specifically, this device is composed of a control stem, a pinion mounted on the stem, as well as a selection lever arranged so as to establish a kinematic link between the pinion (and thus the stem) and a gear (among a number of gears). These gears are each associated with a specific mechanism, thus enabling selective control of a corresponding function. To achieve this, the usual sliding pinion takes the form of a worm screw and can thus directly drive a toothed wheel and pinion on the same plane as the rotation axis (instead of being superimposed). The selection lever is fitted with an intermediate wheel and pinion arranged in such a way that it can selectively mesh with each of the gears (and their respective functions). The use of a single intermediate wheel and pinion to enable selective coupling with one or other of the gears reduces the number of components and thus makes the device particularly compact.

Replacing the usual kind of crown and thus avoiding any protuberance on the side, a flat-shaped “telescopic” crown is recessed into the caseband and secured to the stem via a spring clip. This construction ensures the crown is perfectly integrated within the caseband and protects it from any improper handling or impacts that might damage the movement.

Finally, while the thickness of the watch crystal is reduced to an absolute minimum (0.2mm), it must nonetheless meet the modern criteria of shock resistance and water resistance (3 ATM). The crystal must be perfectly positioned and accurately aligned with the bezel which, in the case of the Altiplano Ultimate Concept, is integrated with the case (whereas in a classic construction the crystal is integrated with the bezel which is then placed on the case to close it). It is also perfectly cemented in place. Too much cement would be detrimental to the alignment, whereas too little would not guarantee a perfectly hermetic seal. In response to this challenge, the fitting of the crystal has been rethought. Piaget has designed a space in the form of a circular compartment juxtaposing the bezel and intended to house the exact quantity of cement required to secure the movement in place and ensure the perfect positioning of the crystal.

These five patents are joining the one filed in 2014 for the launch of the Altiplano 900P and relating to the hand-fitting. The latter is mounted under the bridges, contrary to a classic construction in which it is be placed on top, and thereby freeing up space between the cannon-pinion and the crystal. When the latter is distorted by pressure, a phenomenon that is relatively imperceptible for a traditional watch but significant for an ultra-thin watch with lower safety tolerances, it no longer presses on the hands but instead on the going-train bridge and thus has no effect on the rate of the movement.

Attired in a cobalt-based high-tech alloy, the Altiplano Ultimate Concept displays an elegant and technical appearance. Machined directly in the watch case, the baseplate has been given a black PDV treatment like that of the caseback, while the wheels feature alternate sunburst or circular satin-brushed finishing. Cut-out so as to reveal more fully the subtle mechanism operating at the heart of the Altiplano Ultimate Concept, the chamfered bridges are sunburst satin- brushed so as to further enhance this exceptional watch.

Setting the crowning touch to this masterpiece of finesse, an ultra-thin 1.1mm thick alligator leather strap with a Kevlar core and a velvet calfskin lining is secured by a likewise ultra-thin pin buckle.