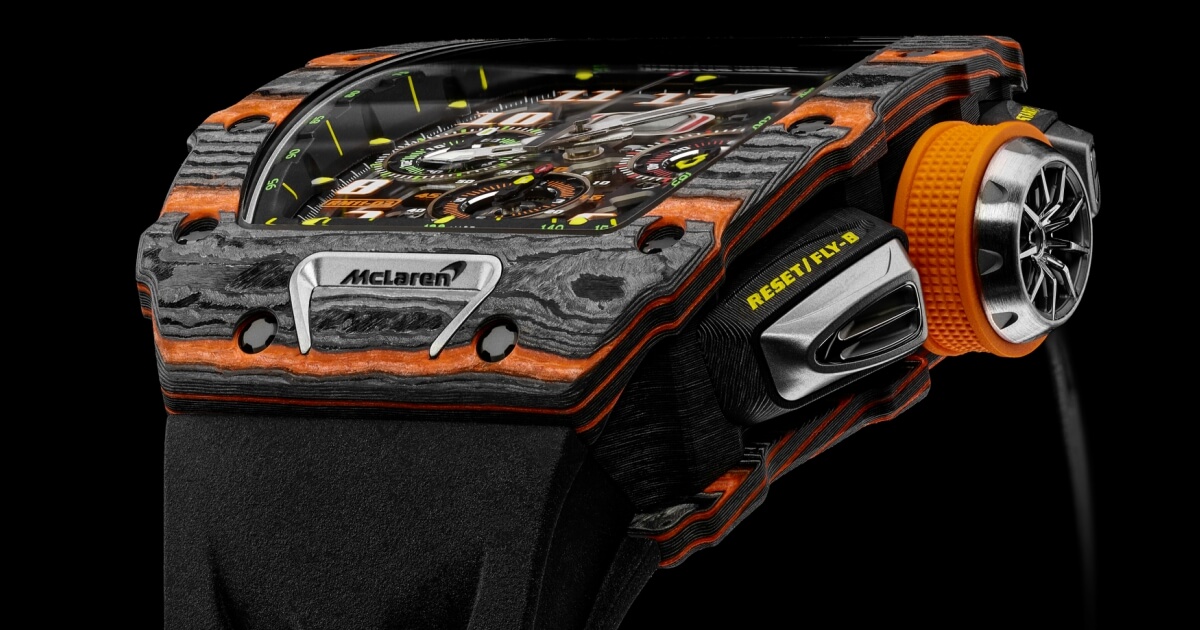 The RM 11-03 McLaren, created in close collaboration between McLaren Design Director Rob Melville and Richard Mille Engineer Fabrice Namura, has been in development since McLaren Automotive and Richard Mille partnered last year, uniting a mutual interest in unique design, the use of new materials and modern craftsmanship. These influences, as well as design cues taken from McLaren’s range of luxury sportscars and super cars, are reflected in this special timepiece.

The case of the RM 11-03 McLaren is made of Carbon TPT interlaced with Orange Quartz TPT, resulting in an extremely resistant and lightweight case while paying tribute to a colour that is synonymous with McLaren. The Carbon TPT enhances the mechanical performance of the RM 11-03 and offers resistance to harsh environments.

The titanium pushers fitted to the Carbon TPT case echo the design of the distinctive headlights of the McLaren 720S. Titanium inserts, similar in shape to the iconic McLaren F1’s air-intake snorkel and bearing the McLaren logo, adorn the bezel. The complex grade 5 titanium crown is shaped like a McLaren lightweight wheel and the McLaren Speedmark logo is incorporated into the rubber strap specifically developed for this watch.

The RM 11-03 McLaren features the automatic RMAC3 calibre mechanism, first launched in 2016, with a flyback chronograph and 55-hour power reserve. The instant return of the counter to zero makes it possible to quickly restart the stopwatch function.

Richard Mille created a baseplate and bridges for the RM 11-03 McLaren made from PVD-treated grade 5 titanium, enabling the gear train to function effortlessly. The dial features an annual calendar and oversized date, as well as a 12-hour chronograph and countdown counters.

McLaren clients will be able to view the timepiece on the McLaren stand for the duration of the 88th Geneva International Motor Show.