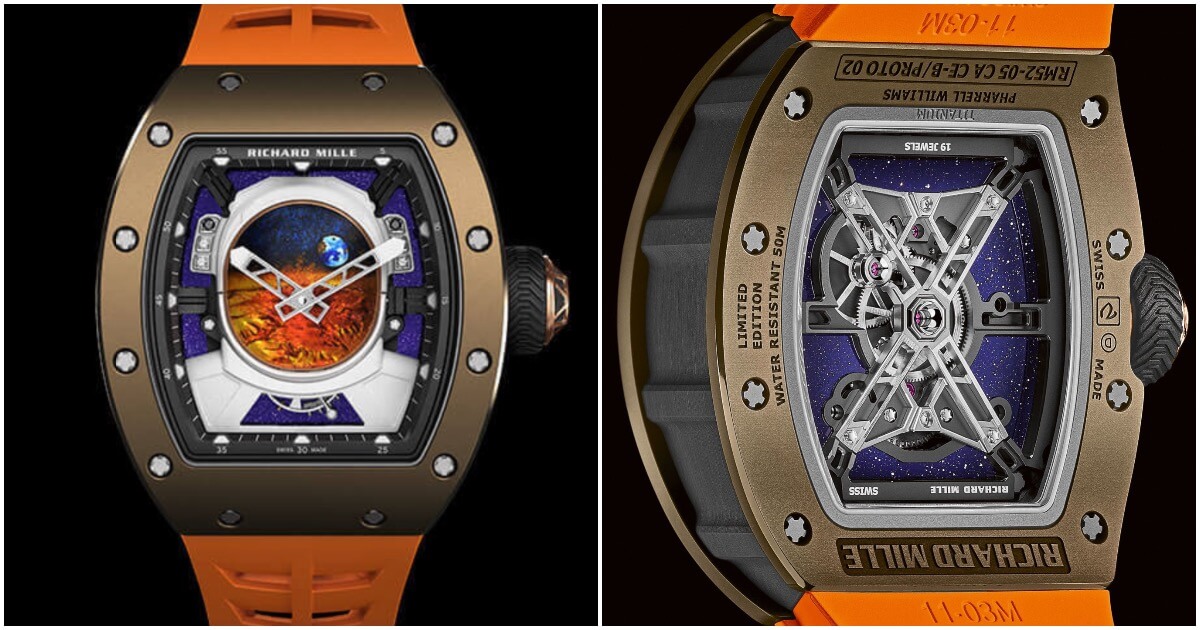 Mankind has looked at Space from the Earth for time immemorial. But with the RM 52-05 Tourbillon Pharrell Williams, the Earth is observed from Mars, a viewpoint expressing one of Pharrell Williams’ dreams. One almost fulfilled in this new model, interpreted by the Creative Development team at Richard Mille: an engraver, an enameller and a painter who, working together, have brought into being an extraordinary piece of contemporary, unconventional watchmaking.

The man from another planet

Maybe the word that best sums up Pharrell Williams is “universal” —in every sense of the term. A deep link to the cosmos is something he felt very early on. No surprise, then, that Pharrell grew up a major fan of Star Trek, as anyone will know who has seen him use a Vulcan salute when conveying the name of his label, Star Trak. He has never made any secret of his fascination for the cosmos, or of the deep sense of spirituality he derives from it, of the wholeness at the centre of things.

Conjuring the visions, fantasies, and other imaginary projections of the brand’s partners is a familiar quest for Richard Mille, one that begins all over with every new adventure. A truly artistic project, the development of the RM 52-05 is special for the way it hinges on interpreting an idea, a symbol and a desire. This last has taken the form of a tourbillon whose originality lies in its astonishingly multidisciplinary techniques.

Baseplate And Bridges In Grade 5 Titanium

Grade 5 titanium is a biocompatible, highly corrosion-resistant and remarkably rigid alloy that enables the gear train to function effortlessly. The alloy is 90% titanium, 6% aluminium and 4% vanadium. This combination further enhances the material’s mechanical properties, which explains its frequent use in the aerospace, aeronautics and automobile industries.

The baseplate of the movement features large inserts in dazzling blue aventurine glass that evoke outer space. Also known as ‘goldstone’, this glass glitters due to its triangular and hexagonal copper crystal inclusions. Incorporated into the heart of the RM52-05 calibre, it represents the confines of the universe and all its stars.

The terminal-curve spring equipping this type of balance wheel guarantees greater reliability when subjected to shocks or strong vibrations and during movement assembly and disassembly, hence ensuring better chronometric results over time. The regulator index is eliminated, and a more accurate and repeatable adjustment is possible thanks to 4 small adjustable weights located directly on the balance.

Fast-Rotating Barrel (6 hours per revolution instead of 7.5 hours)

This type of barrel provides the following advantages:

- Provision of an excellent mainspring delta curve. The choice was determined by the ideal power-reserve/performance/regularity ratio.

The central involute profile of the winding-barrel teeth provides an optimal pressure angle of 20°. This promotes effective rotary motion and compensates for possible variations in the engagement of the going train, thus ensuring excellent torque transmission with a distinct improvement in performance.

The grade 5 titanium helmet resting on a structure depicting the upper part of a spacesuit, also in grade 5 titanium, connects the dial to the movement beneath it. It has been painted white using an airbrush that was initially developed for street artist Cyril Kongo, who hand-painted the RM 68-01.

The projectors and cameras, represented by two diamonds and a black sapphire set on either side of the helmet, required particular care and attention. The stones are showcased by a moderate gem-setting depth, reflectors that have been polished and bevelled using watchmaking techniques and the alignment of their tables, all of which are facing the same way to ensure a uniform reflection.

To recreate the imaginary Martian scene, the curved 5N gold visor has been engraved using specially created burins, grand-feu-enamelled and then hand-painted. The engraving alone requires 15 hours per piece, followed by an entire day of grand feu enamelling. Pierre-Alain Lozeron had to apply all his patience, skill and dexterity to bring these creations to life.

The brown Cermet combines the lightness of titanium with the hardness of a ceramic. It consists of a metallic zirconium matrix associated with high-performance ceramic that gives the material its incredible brown hue with metallic reflections.

Cermet has a mass to volume ratio of 5.7 g/cm3 and a hardness of 1,200 Vickers, comparable to a traditional ceramic and making it eminently suitable for use in bezels and case backs, both areas that are highly vulnerable to scratches, while ensuring that the entire assembly is light in weight. These two elements are affixed to a caseband made of Carbon TPT®, which also contributes to lowering the total weight.

This high-tech material is made up of 600 layers of parallel filaments obtained by separating out carbon fibres. The layers, no more than 30 microns thick, are impregnated with a black resin. They are then assembled on a dedicated machine, which stacks the layers, varying the orientation of the fibres by 45° between layers. The composite is then heated to 120°C at a pressure of 6 bars in a kiln similar to those used for the production of aeronautics parts, after which it is ready to be machined at Richard Mille.

The tripartite case is water-resistant to 50 metres, ensured by 2 Nitrile O-ring seals, and is assembled using 24 spline screws in grade 5 titanium and abrasion-resistant washers in 316L stainless steel.

The price for the Richard Mille RM 52-05 Manual Winding Tourbillon Pharrell Williams is $969,000.