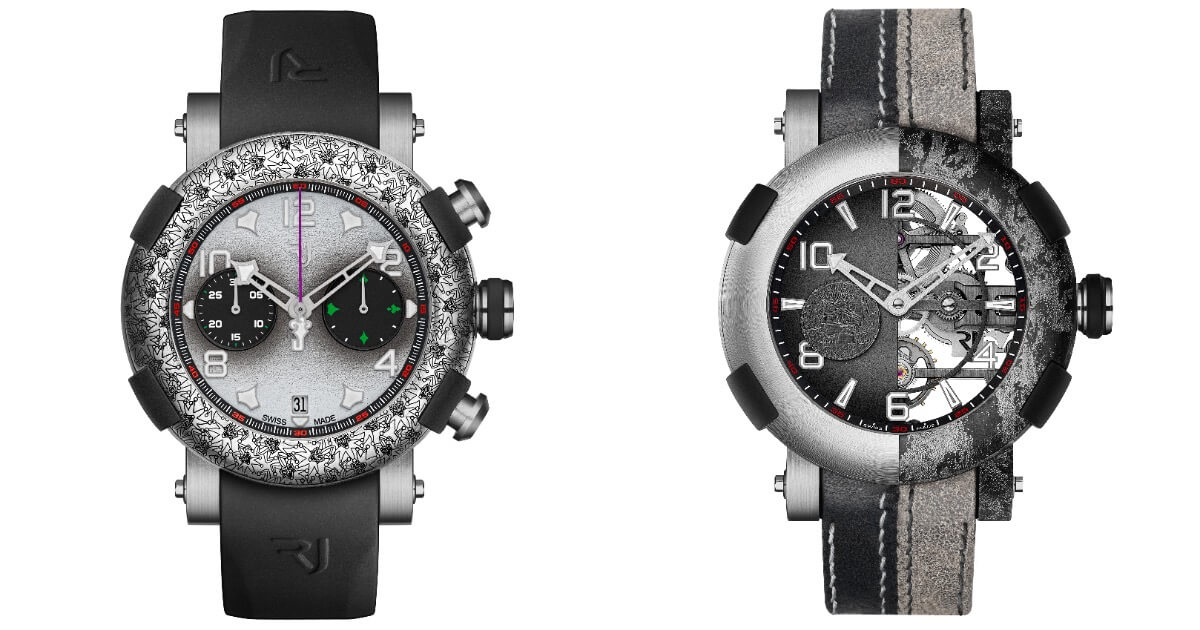 Swiss watchmaker RJ marked the 80th anniversary of Batman’s debut with a special event held at the newly opened Galeries Lafayette Champs-Élysées concept store in Paris. From September 2nd through the 22nd, fans will have the opportunity to see and experience RJ’s new collaboration watches created with DC Comics to celebrate two of the Dark Knight’s greatest nemeses: Arraw Two-Face and Arraw The Joker.

By joining forces with Warner Bros. Consumer Products, one of the world’s biggest entertainment powerhouses, RJ combines high-horology and iconic DC characters. The RJ X Batman Villains collection was built on the global success of their first Batman watch collaboration project with Warner Bros. Consumer Products in 2014, which launched to celebrate the 75th anniversary of Batman. Now for the 80th anniversary, RJ channels its dark side with the RJ X Batman Villains. Each limited to only 100 pieces per series, both the Arraw The Joker and Arraw Two-Face are the first collaboration watches to be presented in an Arraw watch case.

“It is always exciting to combine high-horology and iconic concepts of pop culture, and to bring Super Heroes and infamous Super-Villains,” confides Marco Tedeschi, CEO and Creative Director of RJ. “The Super-Villains of the DC Universe have always appealed to audiences around the world for their evil brilliance and ability to shock and thrill. Joining in on the celebrations in Paris of the DC universe with the RJ X Batman Villains is the perfect occasion to honor Batman’s 80th anniversary.”

The Joker chronograph, limited to only 100 pieces, is inspired by the criminal mastermind and perfectly reproduces the aesthetic of the comic strip Super-Villain. Design cues from his flamboyant character appear through the watch, from his lethal razor-tipped playing cards to his striking facial make-up. The dial is a stylistic reinterpretation of The Joker’s face, with an intricately airbrushed finish that evokes the make-up of the Gotham villain.

Immediately distinguishable thanks to the iconic rubber RJ Bumpers and neatly shaped lugs, the 45 mm Arraw case is crowned by a titanium bezel that is laser engraved with an intentionally chaotic The Joker motif. The Arraw hands are also uniquely stylized with playing card “Aces” at their tips. The back of the titanium case features a bold laser-engraved portrait of the Joker himself.

Every Joker watch comes with three interchangeable straps. Two are colorful alligator skin versions in bright green or purple with contrast stitching to match the Joker’s hair and clothing, accompanied by a third strap in black rubber. They can be easily swapped by simultaneously pressing on the Batman logo-engraved screws on the watch lugs.

As part of the collectors’ edition, each watch comes with an exclusive deck of The Joker playing cards.

The Two-Face watch, limited to only 100 pieces, is a remarkable interpretation of the complex and conflicted villain and former Gotham City district attorney who was once one of Batman’s biggest allies, now turned nemesis.

The iconic character’s villainous turn began with a sulphuric acid attack which hideously scarred half of his face. His injuries eventually drove him insane, and just as his face split in two, Harvey Dent’s personality also warped. In that moment, he became Two-Face, obsessed with the concepts of duality, chance and good versus evil.

RJ designed the Arraw Two-Face to be instantly recognizable with a distressed outer bezel, in which the laser-engraved titanium bezel and calf leather strap have been intentionally structured along the right-hand side to echo the symmetrical disfiguring of Two-Face. The clean, structured left side carries a laser-engraved coin, which Two-Face famously flips to make life and death decisions. On the watch this coin serves as a rotating second hand.

Like the watch itself, the calf leather strap is designed to present one clean and one distressed side. The straps that come with the Arraw Two-Face can easily be swapped by simultaneously pressing the screws with the Batman logo on the watch lugs.

As part of the collectors’ edition, each watch comes with an exclusive double-headed coin, Two-Face’s favored possession and his weapon of choice to make life or death decisions.