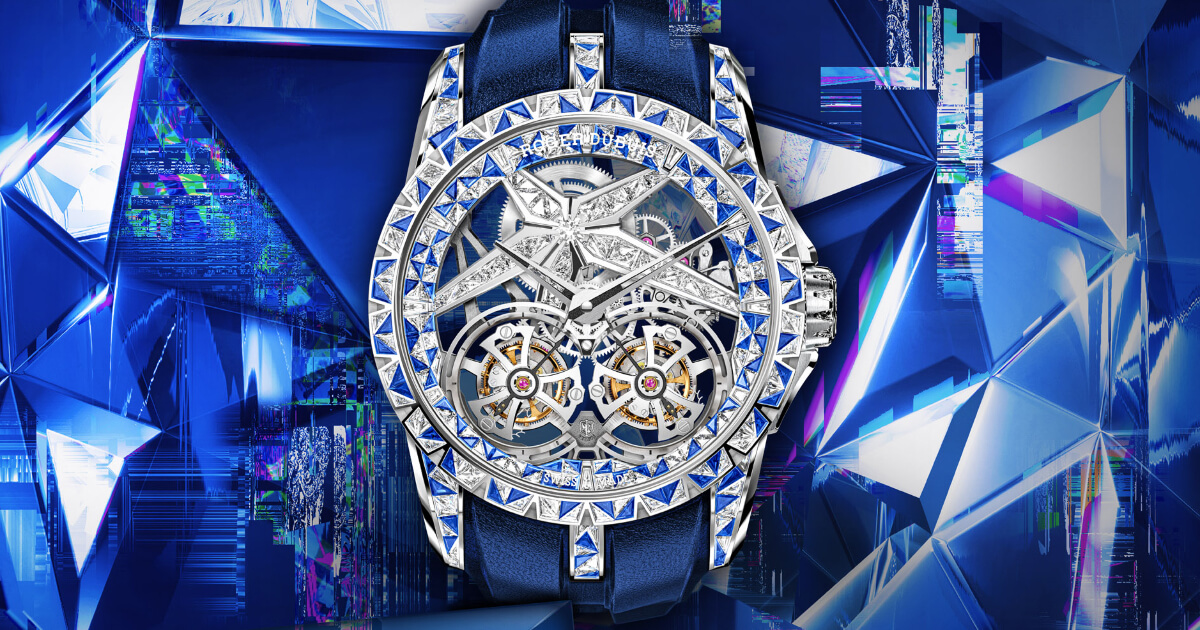 Pride, along with excess, are part of Roger Dubuis’ mindset, a duality that allows unfettered exploring of new territories and the ability to demonstrate the other side of its "personality": dramatic singularity. Indeed, powered by an obsessive quest for pleasure, freedom, and hedonism, all these characteristics are inherent to its very DNA. The result is a proud lineage of over the top and utterly contemporary timepieces in which the brand that dares to be different puts technique at the service of aesthetics. In its latest demonstration of all the above, Roger Dubuis Excalibur Superbia is a stunning contemporary epitome of extravagance guaranteed to send the senses of the most hardened hyper watch aficionado into overdrive.

Roger Dubuis is thus unashamedly guilty of that most serious of the seven deadly sins: Pride, known in Latin as Superbia. Strongly linked to vanity and risk-taking, Superbia is also regarded as having an obsessive addiction to adrenaline, just like, in fact, Roger Dubuis itself. Driven by this, along with its firm belief in living larger than life, Roger Dubuis has created Excalibur Superbia, the ultimate totem for a tribe of people who trust that life is but a game that is for making the most of.

The ultimate example of the Maison’s unshakable pride and excess, Roger Dubuis Excalibur Superbia is crafted in palladium-enriched white gold and set with exactly 600 precious white diamonds and blue sapphires. This offers a truly extravagant (and ideal) housing for Roger Dubuis iconic signature calibre: a brand-new Double Flying Tourbillon movement, the RD108SQ, inspired by its legendary version launched in 2005, the first double-regulator calibre connected with a differential, built up in volume and adorned with a diamond-set star.

For the RD108SQ, paying tribute to Roger Dubuis’ status as a forerunner in the field of this extreme complication mastered by few other watchmakers, in the RD108SQ, the double flying tourbillon is transformed into the ultimate iconic signature.

Aptly demonstrated by multiple tricks embodied in this latest iteration of off-the-radar hyper horology, the devil, as Roger Dubuis knows all too well, is in the details. In the Excalibur Superbia, Roger Dubuis once again reinvents the game like no one ever has before.

Sending it firmly into the hallowed halls of World Premieres, the excessiveness of the Roger Dubuis Excalibur Superbia comes neither from its alloy nor its number of stones. What makes it truly bold is that every stone set on the flange, the bezel, the case and the crown is tetrahedron shaped and assembled with an invisible setting on curved surfaces. The hardest way to set a stone, an invisible setting becomes nearly impossible when required on a curved surface.

Where no man dares to tread

Not only has no jeweller or watchmaker ever dared to set a piece in this way, certainly no one has ever been crazy or ambitious enough to do it on a masculine watch. Until now. In this masterpiece in which the complexity of the pattern surpasses any norm known to mankind, master craftsmen at the Maison’s Geneva Manufacture have thus set about creating a backbone structure to encapsulate each stone from the back, complying with the brand’s total determination to avoid any material between the stones themselves.

To complicate matters further, each and every glittering stone in the Roger Dubuis Excalibur Superbia is a tetrahedron, a shape requiring boundless cutting skill as its extreme thinness greatly increases the risk of breaking.

The concept of impossible is nothing if not meaningless at Roger Dubuis where the next challenge is simply round the corner, so not only did every stone have to be tetrahedron-shaped, the pattern was designed so that all 238 stones featured in the case of the Excalibur Superbia has a different shape and is thus singular. Adding insult to injury, the design also demanded that the long-suffering craftsmen of the Manufacture would at times have to deal with the points of six or seven stones meeting simultaneously in the same spot.

The test of Roger Dubuis setters’ skill does not stop here, however. The final sting in the tail of the Excalibur Superbia comes with the grooving – the last step required to complete the invisible setting with the previously perfectly triangulated stones. This is so hard to do on a tetrahedron stone that it took each gemsetter an average of 30 minutes to do a single groove, corresponding to 900 hours for this operation alone on all three sides of the 600 diamonds, plus 420 hours to set the case and bezel – and that’s without even counting the stone-cutting! The entire process takes about three times longer than the same case set with baguette-cut stones. And just for good measure, reaching the very pinnacle of complexity Roger Dubuis-style, in the Excalibur Superbia, this already painstaking, ground-breaking process has been entirely achieved on a curved surface.

Simple, straight and utterly frank, the lines of this exceptional piece of artistry are strongly reminiscent of the spatial art forms favoured by interior design artist Kaz Shirane with whom the brand that dares to be different shares a number of characteristics – not least from a visual perspective.

“I create interactive spaces that focuses on visitors. Whenever the space user enters a room filled with mirrors, there will be interaction – a reflection in mirrors - and the user can become the co-creator of this space. This mirrored space is designed to serve as a receiver and amplifier of the user’s will. The space literally reflects the mind of the visitor, enabling him/her to become an artist. The only rule imposed on visitors in my installation is to enjoy the space as freely as they want. “

“Roger Dubuis and I share the same vision: we create incredible pieces that make people feel they are the protagonists. For me, the Roger Dubuis Superbia watch is like a time machine that can take us to an extraordinary world in an instant. I always want to create such space in my artworks. The elaborate craftsmanship is, of course, absolutely wonderful. But beyond that, what struck me the most is that it is a very artistic piece: its distinctive design catches the light so beautifully and can be noticed even from afar.

I was honoured that my work inspired the design of their new watch. It proves that art has many facets and can open up to new possibilities.

I admire Roger Dubuis as it pours its heart into making its products; the importance it attaches to quality as well as its attention to details are visible in every aspect. I am looking forward to exploring this collaboration further. My role will be to express the Roger Dubuis philosophy and enable customers to experience its one-of-a-kind world through my art” - Kaz Shirane, artist.

·       Case back: In white gold set with brilliant cut diamonds