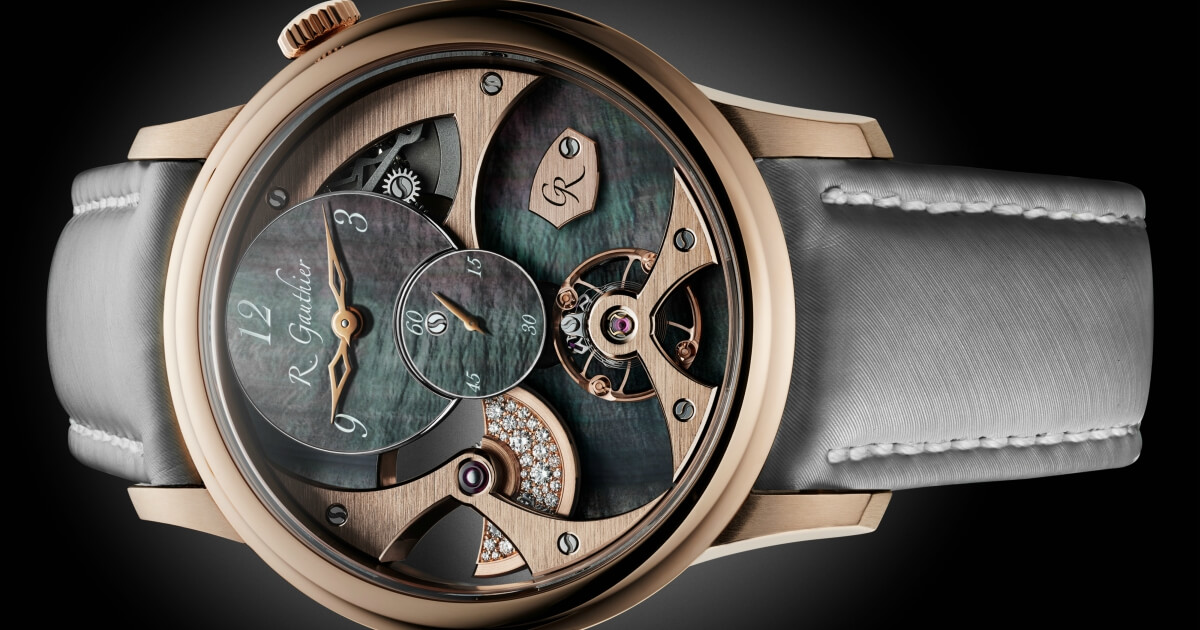 “Increasingly, female collectors are looking to own truly exceptional mechanical timepieces,” says Gauthier. “While aesthetics still play a role, these women want the real deal in terms of innovative mechanisms and fine hand-finishing. Insight Micro-Rotor Lady offers this combination of style and substance.”

Insight Micro-Rotor Lady’s hour-minute subdial and small seconds are crafted from mother of pearl exuding a gorgeous iridescent sheen, indications powered by an in-house calibre that boasts a bidirectional micro-rotor made from 22k gold. The front of this oscillating weight is spectacularly decorated with brilliant-cut diamonds of varying sizes.

Framed by a cut-out in the mainplate – also adorned with mother of pearl – the sparkling micro-rotor turns fluidly and noiselessly between two bridges, each fitted with a friction-minimising, wear-resistant ruby bearing. However subtly and in whichever direction the micro-rotor swings, it efficiently winds a serially operating double mainspring barrel that, when fully wound, provides a generous 80 hours of power.

The dial is a picture of depth and harmony, with the mother-of-pearl subdials and mainplate cover superbly setting off the red gold hands, gilded balance wheel and red gold treated plaquette and bridges that are hand bevelled and straight-grained. The arcs of the sweeping bridges marry with the inner contours of the red gold case.

The case’s 39.5mm diameter ensures a comfortable fit on slim wrists. Impressive design details include a lip in the caseband that flares out to meet the bezel; the crown placed at 2 o’clock to free up space for wrist movement; and the bombé sapphire crystal which gradually rises so its highest point is over the hour-minute display – the true centre of the dial in Romain Gauthier’s eyes.

There are more beguiling views of the movement through the display back. Here the micro-rotor can be see setting the visible train of gears in motion, starting with the reversing gear that lends the mechanism its bidirectionality. The gears and ratchets stand out for their circular arms that feature eye-catching bevels.

Meanwhile, the golden bridges are decorated with hand-made, hand polished bevels and jewel countersinks and are fixed in place using Romain Gauthier’s signature screws with aesthetic S-slot. The sinuosity of the bridges is nicely juxtaposed by the linearity of the straight-grained finishing and four plaquettes.

“With Insight Micro-Rotor Lady, I wanted to create something that is feminine, but which avoids clichés of femininity, and something that is technical but where the showpiece complication provides a simplicity of use,” says Gauthier. “A few turns of the crown get the movement going, you set the time, put the watch on and let the micro-rotor do its work. You can then just enjoy it as an elegant and reliable daily companion.”

Insight Micro-Rotor Lady comes in two limited editions: With Tahitian black mother-of-pearl dial and with Australian extra white mother-of-pearl dial. In each case, the hour-minute subdial and small seconds are crafted from the same piece of mother of pearl (0.3mm thin), while the mainplate cover is cut from another piece of the same type of mother of pearl (0.6mm thin), creating a dynamic contrast of textures.

The fragility of the nacre means great care has to be taken during the cutting process, especially for the one-piece mainplate cover that bears a complex shape with a figure of eight cut in the centre to accommodate the small seconds and balance wheel. In a neat design touch, the edges of this cut-out are bevelled.

Both types of mother of pearl originate from their natural habitat in the South Seas and are ecologically sourced. Each mother-of-pearl dial and mainplate cover is different, and each arrangement of the diamonds decorating the micro-rotor is different, meaning no two Insight Micro-Rotor Lady timepieces are the same.

Insight Micro-Rotor Lady’s movement was designed, developed, produced, decorated, assembled and regulated at Manufacture Romain Gauthier in the Vallée de Joux, Switzerland. Romain Gauthier has designed it to be highly visible so the viewer can gain an instant appreciation of the spectacular mechanics and fine finishing, giving rise to the name “Insight”.

Gauthier has designed the micro-rotor so that it turns between two bridges, each fitted with a ruby bearing, thus harnessing the watchmaking principle of avoiding metal against metal by putting metal against ruby. Rubies have a low coefficient of friction and high wear resistance, here helping to produce a smooth, inaudible rotation of the micro-rotor compared to, say, metal ball-bearings which can entail noise and wear.

Given the relative weight of the micro-rotor, Gauthier has decided to eschew a ‘flying’ rotor supported by just one bridge from beneath and instead design the micro-rotor so it is sandwiched between two bridges, from above and from below, for superior stability.

The two mainspring barrels combine to offer 80 hours of energy at full wind. The barrels are in series for more constant power to the regulator that features the Romain Gauthier balance wheel with curved arms and calibrated eccentric weights plus hand-assembled pallet lever that is triangular for maximum rigidity.

Micro-Rotor snow set with approx. 45 brilliant, round VVS to VS diamonds of varying sizes (0.1 carat)

Crown for winding and time-setting at 2 o’clock