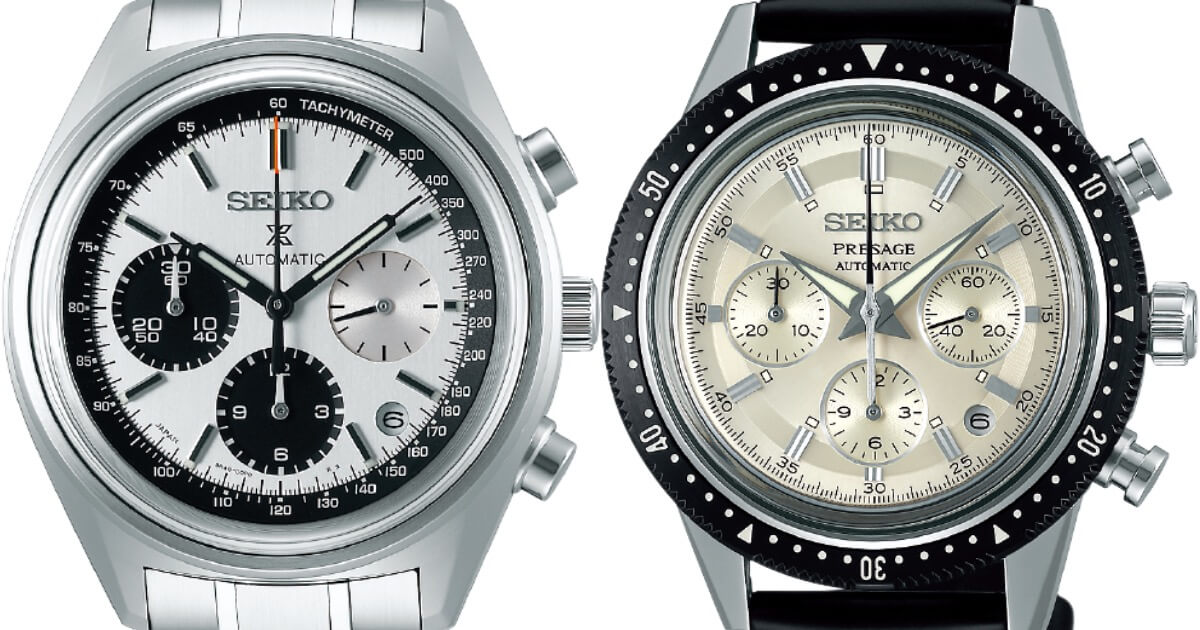 Seiko’s contribution to the development of the chronograph is well known thanks to the 1969 release of Caliber 6139, the world’s first automatic chronograph with a column wheel and vertical clutch. In fact, however, the history of Seiko’s chronographs started long before, with a pocket watch chronograph made in the early 1940’s. Today, this long and proud tradition in the measurement of elapsed time is celebrated in two new automatic chronographs that commemorate two landmark watches, from 1964 and 1969. One is in the Prospex collection and the other in Presage. Both will be available from December, 2019 at Seiko Boutiques and selected retailers worldwide.

In commemoration of the 1969 classic

The 1969 launch of Caliber 6139 was, of course, an important milestone in Seiko’s history because it was one of the world’s first automatic chronographs but its real significance lay in the fact that it incorporated both a column wheel and a vertical clutch, devices that allowed Caliber 6139 to deliver a real improvement in the precision with which elapsed time could be measured in a watch. Today, the combination of a vertical clutch and column wheel is widely seen as a prerequisite in a high grade chronograph; in 1969, this was an important advance in an automatic wristwatch.

The new Prospex limited edition watch that commemorates this 1969 landmark uses Seiko’s most advanced chronograph caliber, 8R48, which was first created in 2014. In addition to the vertical clutch and column wheel, it incorporates Seiko’s unique three-pointed hammer and a heart-shaped cam which ensure the perfect synchronization of the hands’ fly-back. The watch is based on a much loved design from that era that became known among Seiko’s fans as the “Panda” thanks to the two black sub-dials set against the white dial.

It has the same hairline finish on the dial as the original, the same hands with the same orange tip to the chronograph second hand and the same hour markers and tachymeter bezel markings.

In addition, the new execution offers a third sub-dial for the time of day second hand, an updated case design with Zaratsu polishing and a box-shaped sapphire crystal. It is presented in the Prospex collection as a limited edition of 1,000.

The 1964 Crown Chronograph was Seiko’s, and Japan’s, first chronograph watch. Every aspect of the watch was designed from scratch and it marked the beginning of Seiko’s chronograph wrist watch manufacturing. It had a simple one-push mechanism but it amply demonstrated the same commitment to precision as would Caliber 6139 and all its successors with the inclusion of a column wheel to control the start, stop and reset functions.

The new chronograph is faithful to the design of the 1964 Crown Chronograph with its boxshaped crystal, its sharply defined numerals on the narrow bezel and the inwardly tilted case shape that allows the watch to sit tight on the wrist. Of course, every detail is upgraded; the movement is Caliber 8R48 with its 12 hour chronograph and 45 hour power reserve, the crystal is sapphire with anti-reflection coating on the inner surface and the lugs are Zaratsu polished. The watch is presented in the Presage collection as a limited edition of 1,000.

Limited editions of 1,000 each