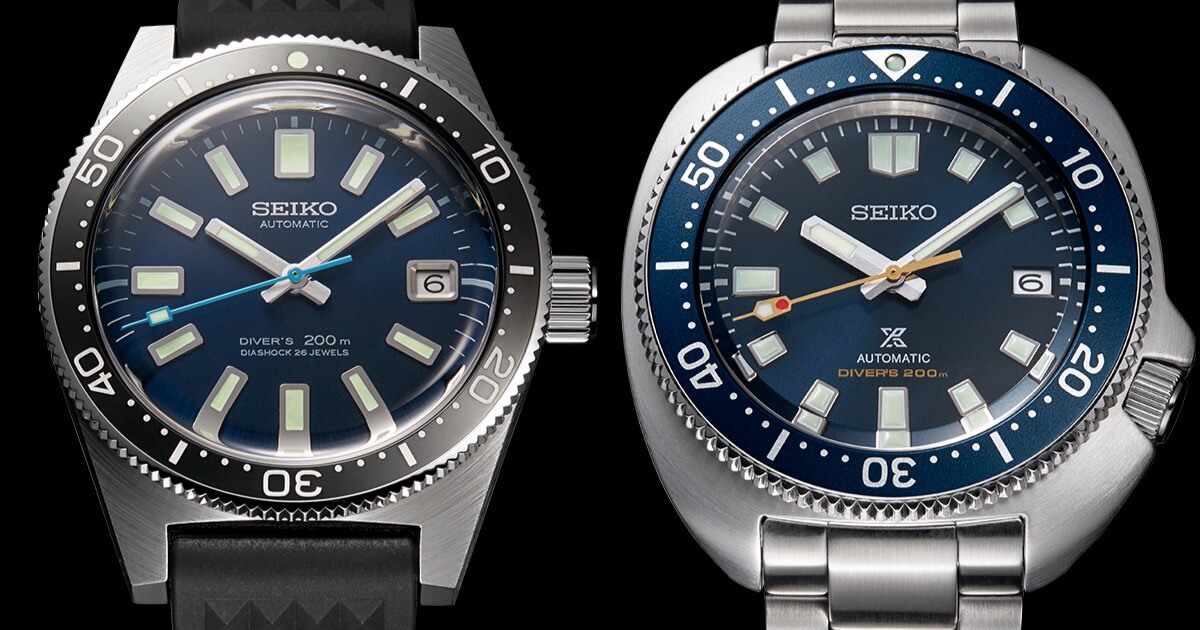 55 years ago, Seiko introduced its, and Japan's, first ever diver's watch. With an automatic movement and water resistance to 150m, it proved its reliability when it was used by members for Antarctic survey in the 1960s. In the years that followed, Seiko created many other diver's watches that found favor with professional divers and adventurers alike, thanks to their high quality and reliability.

Seiko's and Japan's first ever diver's watch was made in 1965 at a time when watches with high levels of water resistance were not widely available. It incorporated an automatic mechanical caliber and delivered 150m water resistance.

As leisure diving grew in popularity, the watch found favor with an ever wider public and set Seiko on a path of continuous development in durable, accurate and safe diver's watches that has continued to this day.

The greatest feature is in the grade of stainless steel used in case. To be known as Seiko's "Ever-Brilliant Steel," thanks to the brilliant white hue that gives this watch its unique look, this grade of steel is more corrosion resistant than that which is used in most high-end watches today.

This material is used extensively in the surfaces, linings, bolts and other components of marine structures and vessels so as to avoid corrosion in a chloride-rich environment such as sea water. It presents many challenges in the manufacture of watch cases but, thanks to the experience and innovative techniques of the Seiko team, these challenges were overcome, and Ever-Brilliant Steel is now set to bring a new level of durability to the diver's watch.

It is powered by the 8L35 movement, developed and assembled expressly for diver's watches at the Shizukuishi Watch Studio.

While faithful to the 1965 design, this new Prospex diver's watch has greatly enhanced functionality. It has a box-shaped sapphire crystal and 200m water resistance for greater reliability. The case back bears the same dolphin emblem as the 1965 original.

The watch is offered in a special box with a blue color additional strap made of silicon.

Introduced in 1965, Seiko's innovative diver's watch has been chosen by divers and adventurers globally.

Seiko's diving watch has become a global standard as a result of over 50 years of innovation.

The 1970 launch model, which boasts strong popularity in its history, will be reinstated with a blue color. It is resurrected by modern state-of-the-art technology and a design interpretation.

A unique profile and a proud history

The uniqueness of the design of the 1970 watch stemmed largely from the way that the crown, moved to the 4 o'clock position, was protected by the extension of the case around it. The design turned out to be as memorable as it was functional and this 150-meter water resistant diver's watch rapidly found favor among those who needed a watch of exceptional strength. It was worn by the Japanese adventurer, Naomi Uemura, when he did a solo dog-sled run from Greenland to Alaska, a journey of 12,000 kilometres that took eighteen months.

Born in 1941 in Toyooka City, Hyogo Prefecture. After entering Meiji University in 1960, he joined the alpine club and began his career as an adventurer. In 1970, he climbed Everest for the first time as a Japanese citizen and became the world's first top mountain climber in the five continents by climbing McKinley in the same year. From 1974 to 1976, he ran 12,000 kilometres of the Arctic region with dog-sledge alone. In 1978, he reached the Arctic Point with dog-only dogs and ran through the 3,000 kilometres of Greenland and the front line of the world's adventurers.

However, after achieving the world's first feat by climbing McKinley in the winter of 1984, his reporting of the successful climb was to be his last form of communication to be made. In that same year, he was the fourth person in Japan to be awarded the National Honor Award. His warm personality full of humanity, who continued to challenge harsh nature, has won many hearts.

The new Prospex re-creation of this 1970 diver's watch is slightly larger than the original but faithful in every other respect to its design.

The case was given a wide, flowing design purely to protect the crown at the 4 o'clock position.

Specifications suitable to the present day

It is powered by Caliber 6R35 that delivers a power reserve of 70 hours. The case has a super-hard coating and a dual-curved sapphire crystal with anti-reflective coating and is 200-meter water resistant. The upper surface of the bezel rim is Zaratsu polished to a perfect mirror finish.

The watch is offered in a special box with blue color additional strap made of silicon.

·       Other Specifications: An additional silicon strap is included; Screw case back; Screw-down crown; Serial number engraved on the case back; Unidirectional rotating bezel

The price for the Seiko Prospex Diver 55th Anniversary SLA043J1 is EUR 4,800 and is limited edition of 1,700 pieces. The watch will be available from November 2020.

The price for the Seiko Prospex Diver 55th Anniversary SPB183J1 Limited Edition is EUR 1,450 and is limited edition of 5,500 pieces. The watch will be available from November 2020.