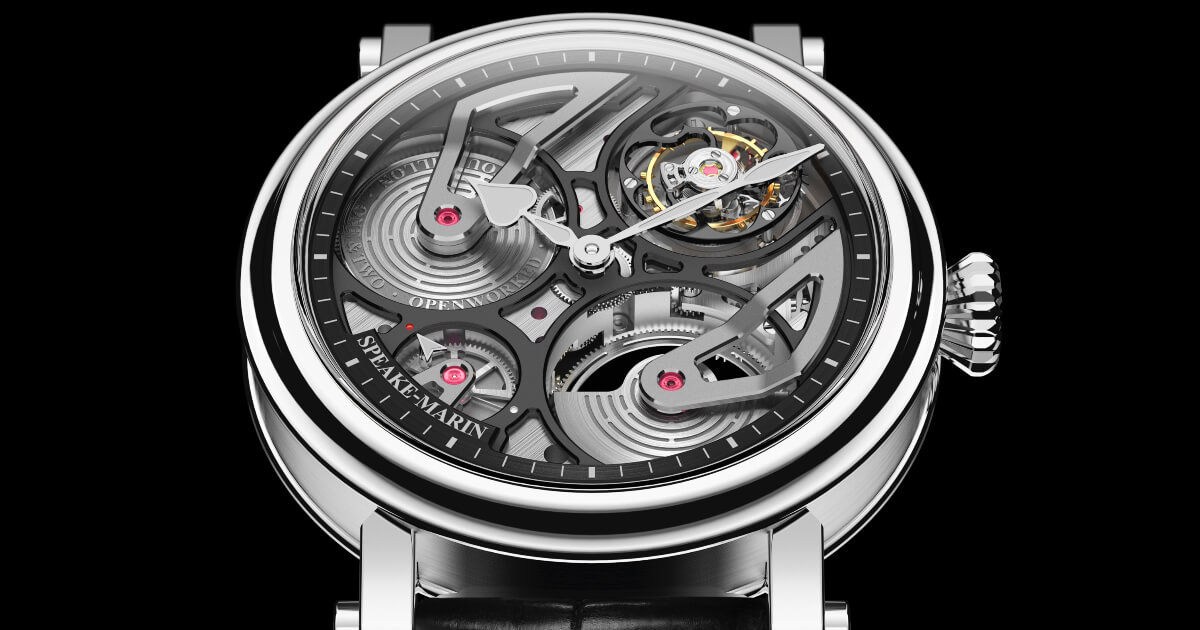 Building on the success of the “One&Two” Openworked collection with various models launched in the last two years, which marked a new aesthetic design code for the brand, Speake-Marin now extends its Openworked range with a new complication: a 60 seconds Flying Tourbillon.

The new SMA05 Calibre is part of the SMA proprietary movement family and follows the “Openworked collection” construction approach with a strong element at 1:30: the flying tourbillon. By displaying a Tourbillon cage at 1:30, Speake-Marin’s objective is to break-away from the traditional watchmaking codes: Speake-Marin is the only watchmaker who positions its tourbillon there. It is actually a real constraint in terms of movement development since the tourbillon cage at 1:30 has to go through the time setting module.

It is even more complicated than a small second at that place because the tourbillon cage requires more space in length and depth. The tourbillon cage is covered by the iconic Speake-Marin rotor shape in black as a reminder of the Speake-Marin logotype. The main plate has a micro blasted black finish which brings depth to the dial. The regulating organ is especially accurate, with a precision of +/- 4 second per day, which is an excellent very good performance for mechanical movements with a flying tourbillon. For this new movement, Speake-Marin chose to develop a 3HZ movement (21,600 alt/h) to easily see the movement alternations on the tourbillon.

Last but not least, the SMA05 Calibre displays a power reserve indicator at 7:30 (72 hours). It creates a visual balance between the barrel, the oscillating mass, the tourbillon and the power reserve, while the sharp edges of the bridges are counterbalancing the classical shape of the case. The barrel is engraved with the model name: “One&Two Openworked Flying Tourbillon”.

This movement is nestled in a new version of the Piccadilly, an evolution of the iconic case of Speake-Marin. The new case is more technical than the original allowing the straps to be integrated closer in the case, moving the crown further into the case so as to soften its aesthetics whilst maintaining its original DNA. The bezel and the case back slightly overlap the central case section altering the overall “look” of the watch whilst maintaining the iconoclastic feel of Speake-Marin. In addition, the glass traditionally set into the bezel has now been altered to a box form, reducing the overall thickness of the case and accentuating the technical aspect of the watch.

Revealing strong watch architecture, the One&Two Openworked Tourbillon anchors the Speake-Marin contemporary style to create “Belle Horlogerie” for those who want to wear something unique on their wrist. This new aesthetic is very masculine thanks to its material mix (gold, black finish and SuperLuminova on the hands and indexes) and the sharp flanks of the bridges. Both hyper contemporary with the dial and classic with the case, it will please gentlemen watch connoisseurs who want to affirm their style and individuality with an audacious watch choice that will differentiate them from others.

This limited edition is proposed in 10 pieces only.

The price for the Speake-Marin One&Two Openworked Tourbillon Titanium is CHF 54,500 for the 38 mm version and CHF 55,000 for the 42 mm version. The watch is limited edition to 5 watches of each diameter.