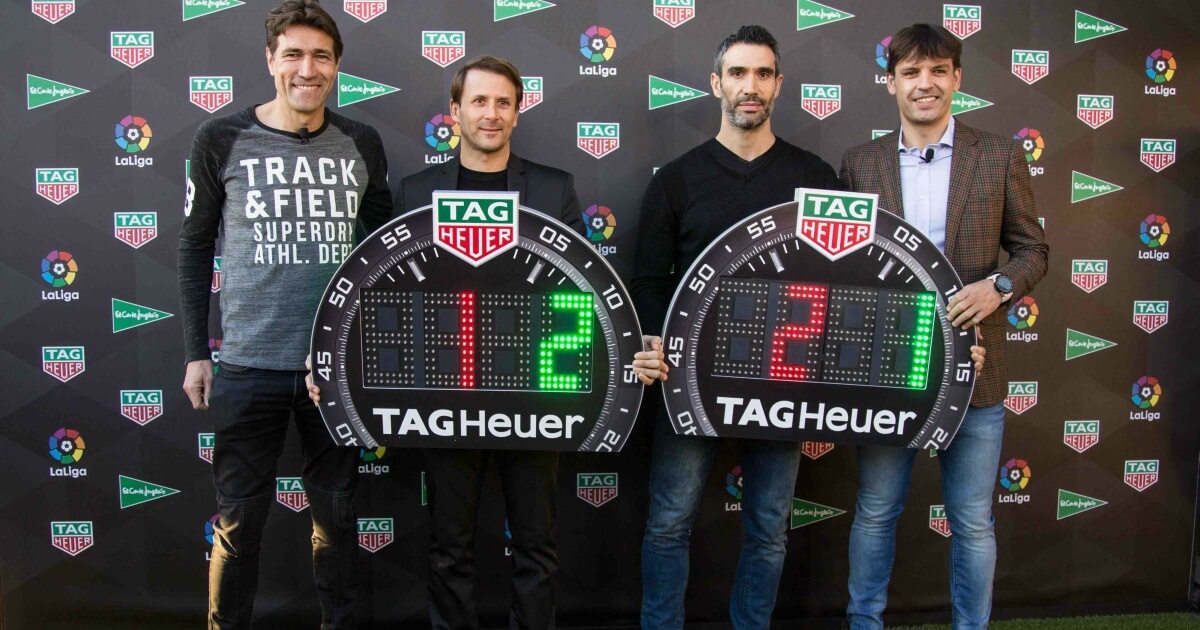 Madrid, December 20, 2017 - The former players and ambassadors of LaLiga Fernando Sanz, Fernando Morientes, Julio Salinas and Gaizka Mendieta participated this afternoon in an original TAG Heuer challenge in which they had to demonstrate against the clock that they do not give in to the pressure. The English Court of Sanchinarro has been the scene in which the Swiss watchmaker has challenged these legends to participate in a # Don'tCrackUnderPressure challenge.

To do this, they have been put to the test in an original skill game in which they had to be the fastest to answer some questions using only a referee board from TAG Heuer. In a fun battle against the clock, the team of legends of Real Madrid has been the winner and has shown that, as on the lawn, every second counts, but to be the best the important thing is not to give in to the pressure.

TAG Heuer has managed to bring together these former rivals of the field of play just a few days of celebrating one of the most anticipated sporting events of the year: El Clásico, which will take place on Saturday, December 23.

"We are very proud of our partnership with LaLiga" said Blanca Panzano, General Director of TAG Heuer in Spain. "It allowed us to know from the inside the exciting world of football and live second to second all their emotions. Today, with Fernando Morientes, Gaizka, Julio and Fernando Sanz, we have seen once again an example of personalities that do not give in to pressure and do not fall back when facing any challenge ".

After the challenge, the players had the chance to chat with Juanma Castaño, who has hosted the event, about El Clasico on Saturday and the development of the LaLiga Santander season.

Asked about the result of this Saturday's score, Fernando Morientes said that "El Clásico is a game that marks a whole season. In addition to the three points at stake there is much excitement in the environment, not only in Spain, but throughout the world. " The former Madrid striker opted for a "2-1". Gaizka Mendieta for his part gave the winner to FC Barcelona with a 1-2. "The Classic is the party that everyone marks on the calendar at the beginning of the season, it does not matter what happened before and what happens afterwards has a lot of repercussion. It is so special precisely because the sports situation of both teams may not mark the game. "

Fernando Sanz said that "a match like El Clásico is so special that it does not influence how the two teams arrive. It may seem like a cliché, but each season it has been shown that the emotion and tension of this match are unique and mark the future of the match, "adding that" the result for which I bet is a 2-1 ". Julio Salinas pointed out that "El Clásico is a match that everyone remembers with the passage of time. From a sporting point of view, the fight for the title can be reduced to two teams. My bet is 1-2 ".