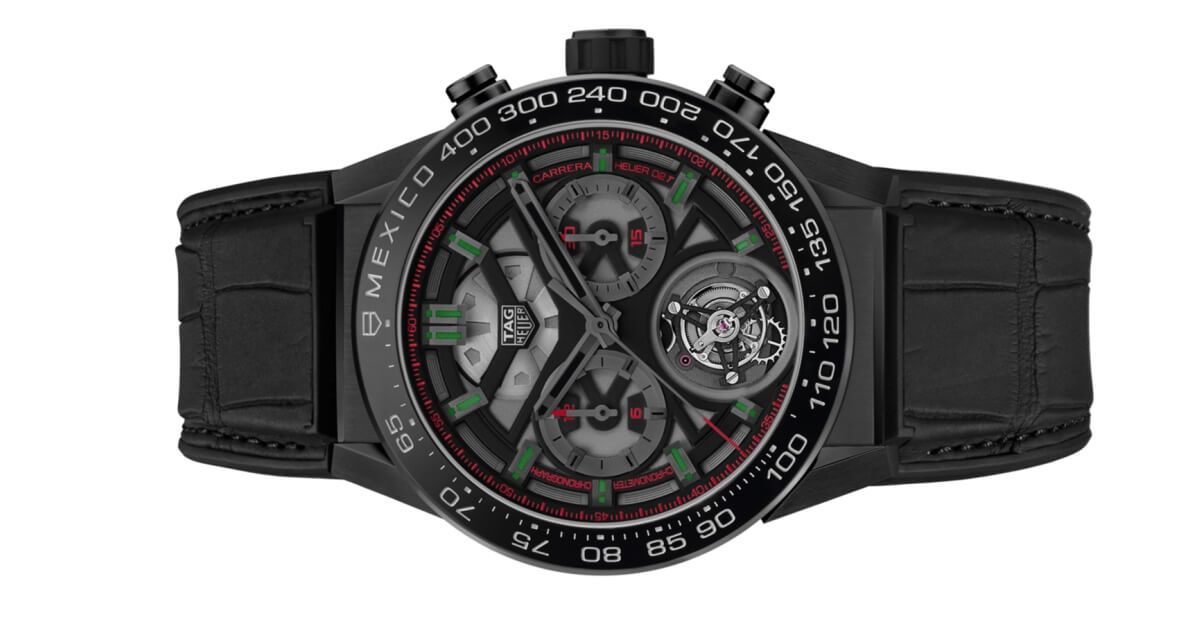 During a press conference, Christian Weissbach, President of TAG Heuer for Latin America and the Caribbean and Karim Santiago, Director of TAG Heuer in Mexico, unveiled the new Carrera Heuer-02T Limited Edition Mexico. The chronograph features a striking design with a 45 mm case made of titanium grade 5 with black titanium carbide, lightweight and shock resistant, a black ceramic bezel bearing the word " Mexico" and a crocodile leather strap.

For the occasion, 30 pieces certified with the tourbillon movement have been designed especially for the Mexican market. From machining to fitting of the main plate, assembly of the movement, adjustment and fine-tuning, casing-up, functional and aesthetic testing, engraving, and fitting of the bracelet or strap: every step is performed in-house, Switzerland,  at the TAG Heuer Manufacture. Its highly competitive price point for a tourbillon within the Swiss watch industry, demonstrates once again the leadership of the Swiss avant garde watchmaker on the affordable luxury segment. This is the continuation of the strategy implemented on affordability and perceived value by TAG Heuer CEO and LVMH Group Watch Division President, Jean-Claude Biver.

TAG Heuer Art Provocateur and famous street artist Alec Monopoly intervened the number #19 of the limited edition to pay tribute to the victims of the past September 19 debastating eathquake in Mexico. The master of ceremony and Mexican actress Michelle Renaud announced the donation to the Global Gift Foundation of the watch along and of Alec Monopoly’s latest artwork titled "Fuerza México". Both pieces will remain on display at SIAR until October 19. Then they will be auctioned at the Global Gift Gala at Mexico City on November 1st. The proceeds will support the reconstruction’ s effort and aid to the victims of the earthquake.

The Carrera Heuer-02T Limited Edition Mexico has a cost of $ 25,000.00 and is exclusively available in Mexico.

The Heuer-02T COSC Chronograph Tourbillon movement was designed and developed entirely at TAG Heuer. A skeleton movement, low-inertia tourbillon designed in carbon and titanium (the only one currently on the market), it comprises 284 components, has a diameter of 31 mm (13 ¾’’ lignes), a thickness of 6.9 mm and a frequency of 4 Hz (28,800 vibrations/hour), with a power reserve of 65 hours. Its design — deliberately conceived with the strategic aim of falling below the CHF 15,000 mark — was launched in 2015. For this to be possible, every team within the manufacture (engineers, watchmakers, designers, purchasing, and production) was involved in the process to enable costs to be optimized at each stage.