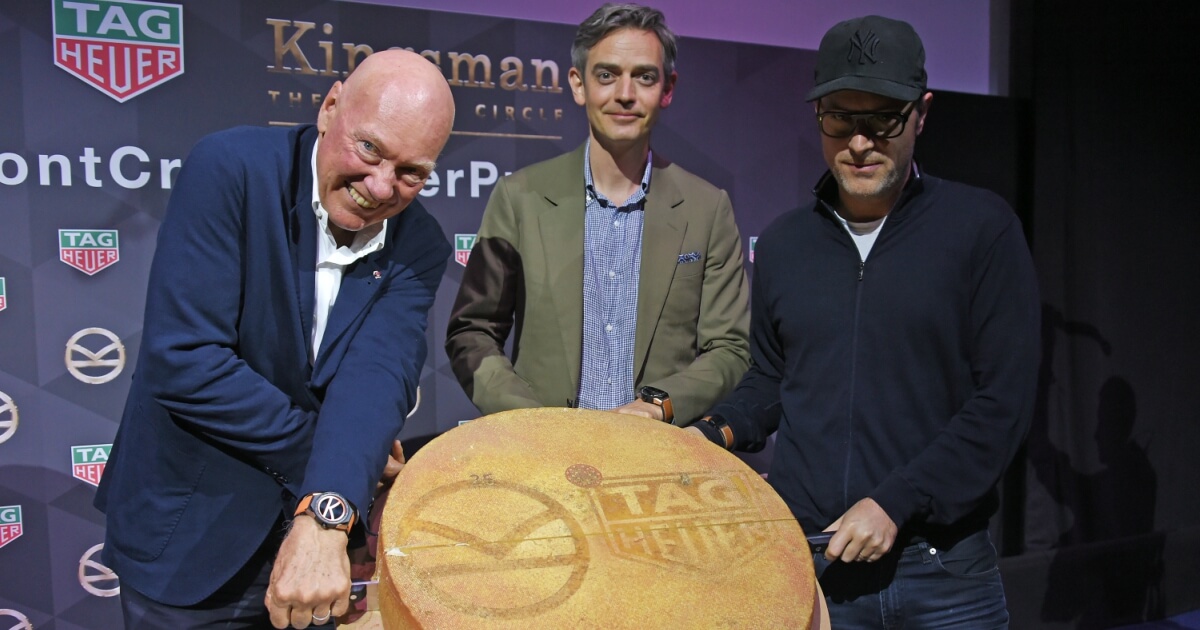 In May, TAG Heuer announced its global partnership with MARV films and 20th century Fox for the upcoming new film from acclaimed director Matthew Vaughn, 'Kingsman: The Golden Circle', in cinemas worldwide on September 22nd 2017. TAG Heuer’s Connected Watch is the official watch of the Kingsman.

The TAG Heuer Connected Kingsman Special Edition will be sold online exclusively through MR PORTER, the award-winning global retail destination for men’s style for one month starting July 6th. This is a first for the Swiss watch brand following its online sales in China earlier this year.

During an exclusive preview of footage from the highly anticipated Kingsman: The Golden Circle, the special edition of the TAG Heuer Connected Modular 45 was unveiled in London by Jean-Claude Biver, CEO of TAG Heuer and President of the LVMH Group Watch Division, alongside Kingsman: The Golden Circle Director, Writer and Producer Matthew Vaughn and Toby Bateman, Managing Director of MR PORTER.

The TAG Heuer Connected watch was personally chosen by Matthew to be the timepiece of choice for his Kingsman agents. Matthew Vaughn said: "For Kingsman: The Golden Circle, we needed a connected watch for our agents. We looked at the different options available, but none of them were elegant enough for a Kingsman. Then I saw an interview on Bloomberg TV with Jean-Claude Biver about his connected watch, and it became immediately obvious; the Kingsman agents would wear the TAG Heuer Connected."

The watches worn by the characters play a decisive role in Kingsman: The Golden Circle, pivotal to the success of the Kingsman agents' missions. They needed watches that could withstand anything, be it underwater shots, fight scenes or stunts. Film-goers will see the Kingsman agents wearing the TAG Heuer Connected.

The Kingsman Special Edition reproduces the aesthetic adopted by the agents in the movie: pink gold lugs and an elegant leather strap with Kingsman print. The watch comes with a second strap in orange velvet, inspired by the iconic orange velvet smoking jacket worn in the film by Taron Egerton. The key difference between the Kingsman Special Edition and the core collection is in its dial functions. Available in either midnight blue or grey, it bears the Kingsman inscription and logo at 9 o'clock and 3 o'clock. At 10:10, the dial vibrates for 10 seconds and the K-shaped logo appears. In a final nod to the film, the original Android Wear lighting function is replaced by the film's logo on the dial, in gold on a white background. An all-terrain watch with an elegant, English-style Kingsman touch.

The Swiss Made TAG Heuer Connected Modular 45 was designed, developed and assembled in Switzerland by TAG Heuer, and features an original concept, which is brand new in the field of connected watches: the connected module is interchangeable with an Haute Horlogerie mechanical module — a 3-hands or COSC-certified Chronograph Tourbillon. The modular concept also applies to the lugs, the strap and the buckle. A strong, elegant and bold design. This is a genuine luxury watch, developed in collaboration with Intel: water-resistant to 50 metres, it features GPS, an NFC payment sensor, a stunning high-definition AMOLED display and a selection of infinitely customisable TAG Heuer dials, with Android Wear 2.0 and a new Companion App to enhance the software experience.