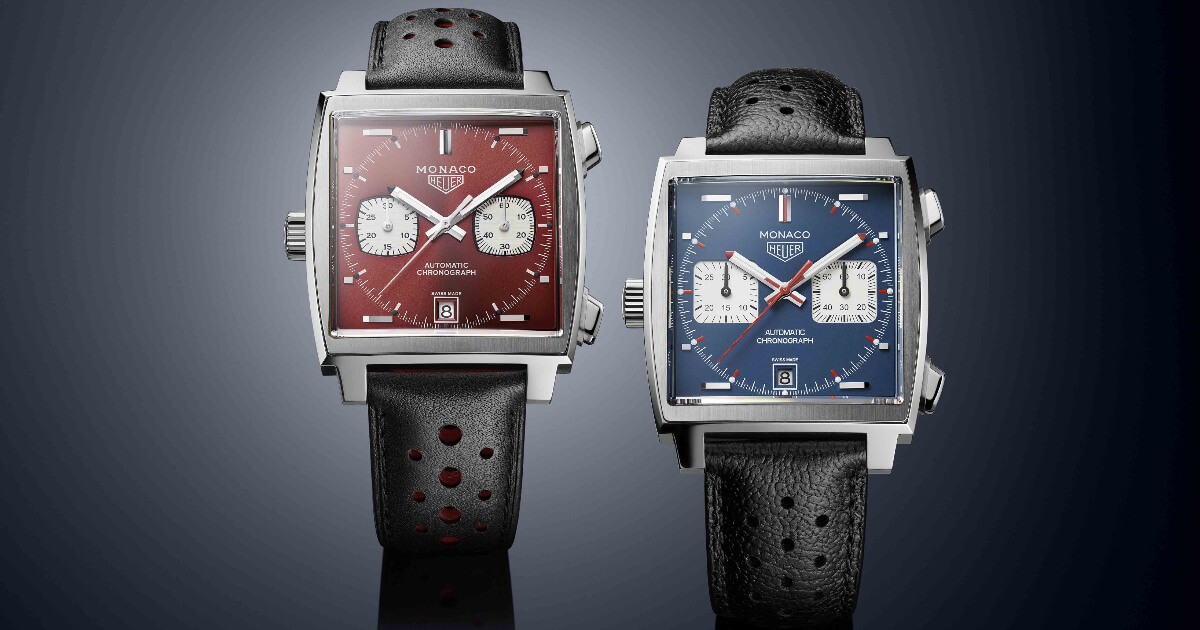 Engines revved this weekend in Le Mans, France, where watch aficionados set their sights on the latest Monaco anniversary edition. The setting for the exclusive big reveal couldn’t have been more fitting – in the 1971 film Le Mans, actor and “King of Cool” Steve McQueen sported the iconic timepiece, securing its place in horological history. As a tribute to the Monaco’s cinematic debut, guests – including Steve McQueen’s son, Chad McQueen – enjoyed a special screening of the famous film in the place where it all began.

Every aspect of the Monaco timepieces design was radical and went where no other watch had ever gone before in terms of design and technology. Not only was the TAG Heuer Monaco the first ever water-resistant square watch, it was also the first to feature an automatic-winding chronograph movement.

In honour of the Monaco’s 50th anniversary, five limited editions will be successively revealed throughout the year. These new models are inspired by the different decades from 1969 to 2019 and pay tribute to a style icon now more contemporary than ever. The special collector’s editions unveiled in 2019 pay tribute to the Monaco’s timeless design and TAG Heuer’s never-ending innovation.

After the unveiling of the first model at the Monaco Grand Prix in May, TAG Heuer was proud to reveal the next limited-edition model celebrating the period from 1979 to 1989 in Le Mans, France. The first model took inspiration from the years 1969 to 1979 – the first decade of the Monaco’s history.

Red-hot racing through the 1980s

Hot on the heels of the first of the five timepieces, the second model reveals a fiery design with a bold red dial synonymous with cutting-edge design and racing victory. Presented on a black calfskin strap punctured with holes lined in red, this special edition captures the speed and style of the Monaco’s second decade. The stainless-steel model, with its iconic square case, features a red sunray dial and two rhodium-plated subdials with curved edges. Black and white accents on the dial perfectly complement the black-tipped hour and minute hands. The hands and indexes are coated with Super-LumiNova® for improved legibility.

As with the original, the pushers are on the right of the case while the crown is on the left – an unconventional feature that has distinguished the Monaco over the past 50 years.

The caseback of this 1980s-inspired wristwatch is engraved with the “Monaco Heuer” logo as well as “1979-1989 Special Edition” and “One of 169”. Sporting a design inspired by the original model, the stainless-steel caseback has vertical and circular brushed patterns. The case houses the renowned Calibre 11, a modern version of the automatic-winding chronograph movement that made its debut inside the original Monaco in 1969. This watch has been produced in an edition limited to 169 pieces.

When the Heuer Monaco (TAG was not part of the company name at the time) was introduced at simultaneous press conferences in New York and Geneva on 3 March 1969, journalists and watch aficionados around the world were amazed. With its never-before-seen water-resistant square case, the Monaco’s daring and iconic design made it instantly recognisable.

The watch’s design was the perfect complement to the advanced technology being presented by the Swiss watchmaker at the time. Developed and commercialised by Heuer, the Calibre 11 was the world’s first automatic-winding chronograph movement.

CEO at the time Jack Heuer believed that this groundbreaking innovation required a design that would demand attention. The Monaco did exactly that.

Was it luck or was it destiny? Jack Heuer once explained that the world’s first self-winding chronograph, called the Chronomatic in 1969, was not about luck but rather filling a clear need on the market for chronographs. “But if the Monaco is a first in design, its success is owed almost entirely to luck,” he has said. As the story goes, Jack Heuer sent stopwatches and chronographs to the set for the filming of the movie Le Mans, and he was also able to send six identical Monaco watches (a move made possible by the watch’s poor post-launch sales). It was this watch that was chosen for Steve McQueen to wear. The watch might not have been successful in 1970, but today it is a TAG Heuer icon. Jack Heuer himself has said that he could never have imagined the watch would be as successful and coveted as it is today. He went to the set of Le Mans after the watches had been delivered, but McQueen was not there that day. They never even met!

Over the past two decades, the Monaco has been closely linked to haute horlogerie with other versions that feature new complications, designs and materials. As it evolves, the Monaco still has the revolutionary spirit that made it both infamous and famous. The complete story behind this icon is told in the new book Paradoxical Superstar, which includes archive excerpts and sketches of the designs and movements. British journalist Nicholas Foulkes, watch expert Gisbert Brunner and American writer Michael Clerizo all contributed chapters that capture the heritage and innovation that defines the Monaco. Underscoring the timepiece’s bond with its namesake city, H. S. H. Prince Albert II of Monaco wrote the book’s foreword.

Chronograph with seconds and minutes; date, hours, minutes and small seconds at 3 o’clock

Like the watch itself, the watch box is also inspired by the original. Each of the special-edition models comes in a box with colours that match the watch and the decade it represents. The 1980s-inspired model is packaged in a dark blue box decorated with the Heuer logo and a horizontal chequer-pattern stripe. The watch is placed on a grey cushion and surrounded by a red interior – the same colour found on the dial.