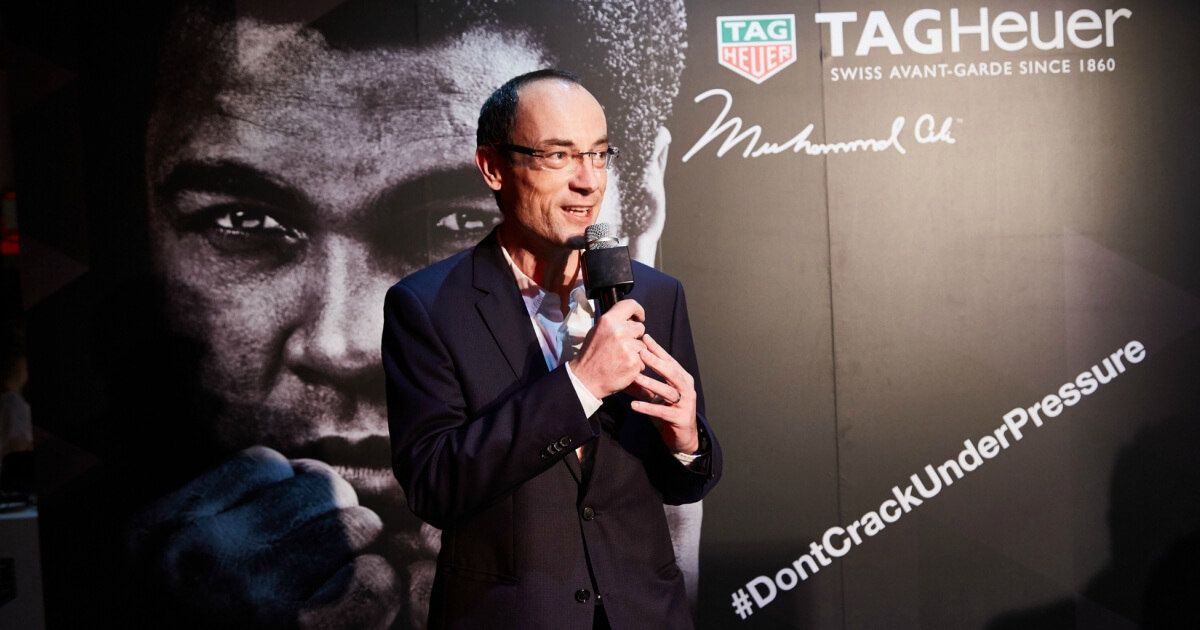 Inspired by his meeting with the renowned boxing champion in 2012, TAG Heuer CEO & President of the LVMH Group Watch Division Jean-Claude Biver paid tribute to Muhammad Ali by creating a dedicated timepiece.

Watch connoisseurs in the UAE got a chance to admire the limited and numbered edition of the Arabic dial, which is now available in stores, while also enjoying a TAG Heuer boxing sparring demonstration.

The inspiration behind this piece was drawn from the boxing legend and is TAG Heuer’s tribute to a man who will forever go down in sporting history as a name to reckon with. The Muhammad Ali timepiece is currently on display at the TAG Heuer museum in La Chaux-de-Fonds, Switzerland, and is a stop watch that features seven interchangeable rings, each of which displays a different scale including one for boxing. As a result of Muhammad Ali’s personal history and strong connections with the Middle East, it seemed befitting to launch a Middle East version for this watch. The Muhammad Ali Carrera Calibre 5 comes in stainless steel and there are 750 international as well as 750 additional timepieces that have Arabic numerals on the dial.

TAG Heuer, in partnership with Ahmed Seddiqi & Sons, captivated its Dubai audience by exhibiting its exquisitely crafted Muhammad Ali Middle East timepiece. The watch was unveiled in Doha earlier this month at the fourteenth edition of the Doha Jewellery and Watches Exhibition.

To mark the Dubai debut of the Muhammad Ali Arabic Dial creation, TAG Heuer organized an exhilarating boxing class for 30 selected media on the 7th of March, from 5:30-7:30 pm. Guests were then treated to a selection of healthy bites and juices.

Boxing was definitely the highlight of the evening as VIPs were invited to an engaging boxing demonstration at 9pm.

The event was attended by friends of the brand Hassan Akhras and Raha Moharrak, who have a great impact within the sports community and a close relationship with TAG Heuer. The brand also had the pleasure of welcoming Jordanian boxing champion and captain of the women’s national team Arifa Bseiso who took to the boxing ring and perfectly captured the spirit of the brand motto #DontCrackUnderPressure.