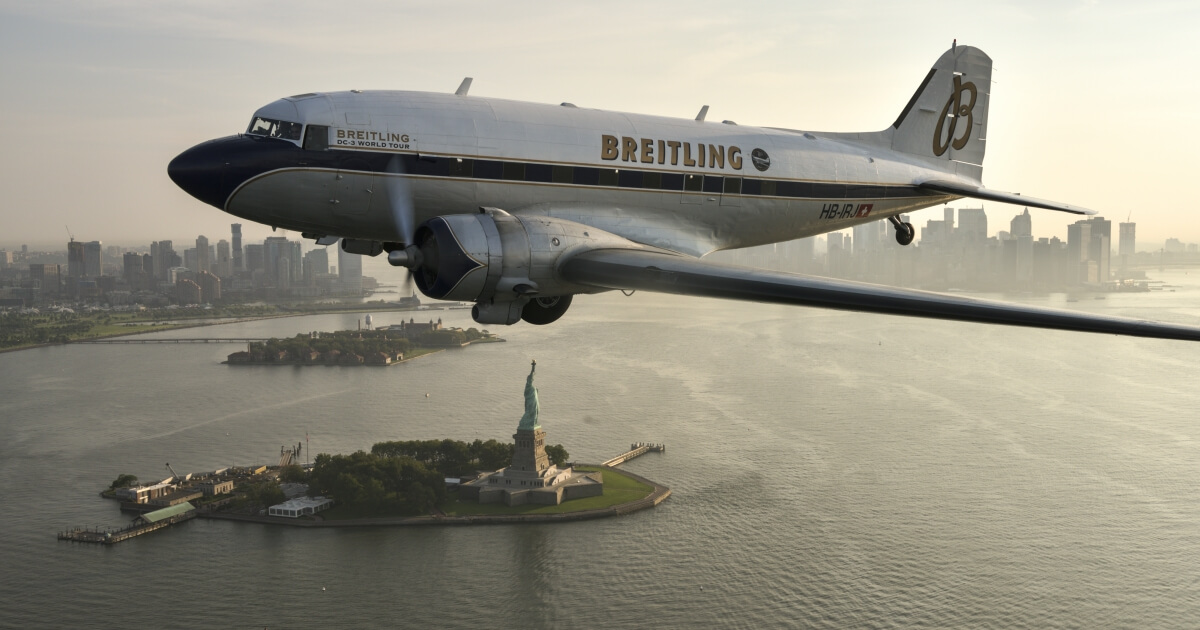 The Breitling DC-3 wraps up its world tour

Having departed from Geneva last March, the Breitling DC-3 made its grand return to Switzerland after circling the globe, landing in Sion where 100,000 passionate enthusiasts are set to attend the Breitling Sion Airshow 2017. A new feat for this legendary plane still in perfectly flightworthy condition and which is celebrating its 77th birthday this year.

To share its passion for aviation with a broad audience around the planet, Breitling launched its DC-3 on a world tour in stages that notably included the Balkans, the Middle East, India, South East Asia, the Pacific and North America. This "Breitling DC-3 World Tour" came to a fitting conclusion in Sion, where the propeller-driven twin-engine plane arrived escorted by the Frecce Tricolori, the elite Italian Air Force squadron. A press conference enabled the aircraft captain Francisco Agullo to present the key challenges and stages of this journey spanning 45,374 km (24,500 nautical miles).

Breitling has in fact chosen to donate two Swiss francs to UNICEF for each mile covered. At the Breitling Sion Airshow 2017, the Breitling DC-3 will be sharing star billing with other formations and ambassadors of the brand, such as the Breitling Jet Team, the Breitling Wingwalkers and the flying man Franky Zapata on his Flyboard Air.

The crew and certain privileged passengers were not the only ones to have flown aboard this veteran of the conquest of the skies. To mark the event, Breitling had also created a limited edition of its famous Navitimer aviation chronograph, the cult watch among pilots and aeronautical enthusiasts since 1952, and decided to have it travel around the world in the Breitling DC-3, thus ensuring it is truly part of this adventure and that it shares every stopover, as well as the finest airborne moments.

The 500 Navitimer "Breitling DC-3 World Tour" chronographs will be delivered to their lucky owners with a logbook signed by the captain notably listing all the takeoff and landing times, flight times, the names of the pilots as well as the weather conditions of each stage. A graphic means of reliving step by step the entire odyssey of both the plane and the watch.