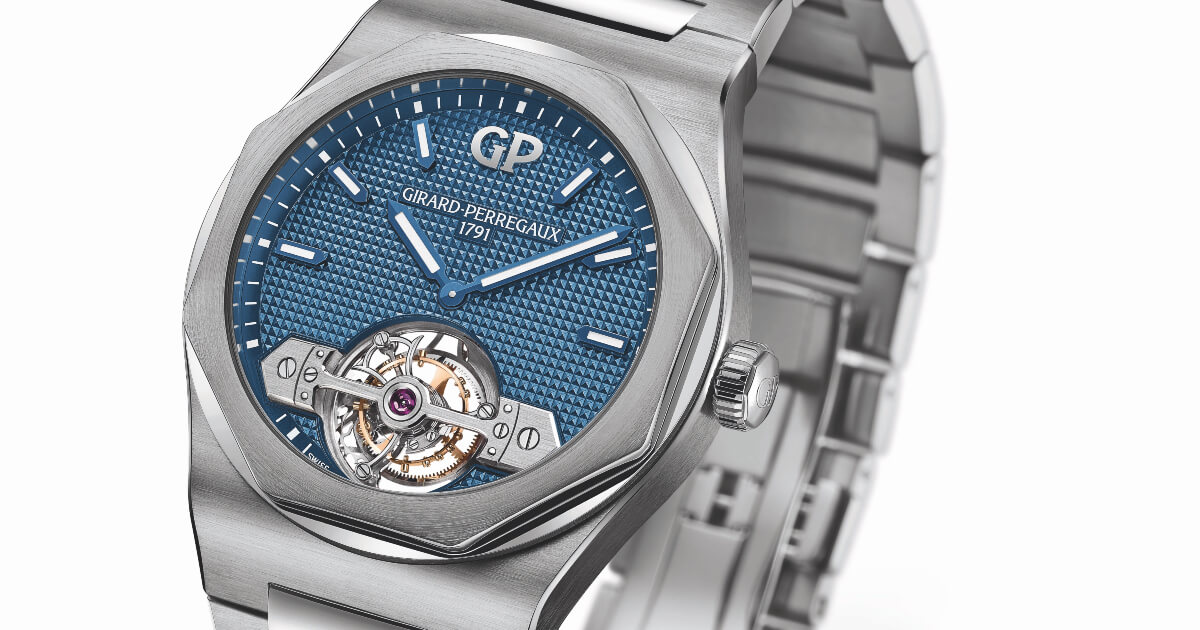 The age-old requirements of Haute Horlogerie and high-tech materials; supreme precision and daily wear; the original icon from 1975 and modern-day man focused firmly on the present: the new Laureato Tourbillon establishes the perfect connection between these widely diverse elements.

Radiating a strong presence on the wrist with its 43mm diameter, this creation is joining the Laureato line that made its grand comeback in 2016, initially as a limited edition marking Girard-Perregaux’ 225th Anniversary, and then a year later as a constantly expanding collection enjoying equally growing success.

The new Laureato Tourbillon features the entire set of characteristics that give meaning to a watch: stylish aesthetics, horological content stemming from historical skills, and the powerful design of a tourbillon held by an arrow-shaped bridge.

What is it that makes a watch appealing and ensures that it remains so across the decades, unhindered by any potential obstacles and instead building on its ongoing credibility? Our memories keep the past alive, while our imagination makes the future appear tangible. In the mid-1970s, the octagonal bezel topping the integrated case and bracelet of the first Laureato featured an unusual aesthetic for masculine watches. For the new Laureato Tourbillon, the Manufacture has opted for a 43mm-diameter bezel, a decision that enables the watch to express a distinctive and dynamic personality, while safeguarding its elegant character.

Differentiating the Tourbillon by a titanium bridge

Gravity has no particular influence on the running of a watch worn by contemporary, active and often sporty men today, as it formerly did with pocket watches whose movements were liable to experience variations in precision. Nonetheless, the several hundred elements composing an Haute Horlogerie calibre remain subject to friction several times per second. Regularity and accuracy were thus absolute requirements for Girard-Perregaux. The Tourbillon, appearing in frequently daring and complex guises, is a horological complication that holds a fundamental place in its quest for chronometric perfection.

This quest for excellence was rewarded in 2017 by the Tourbillon Watch Prize that honoured the Manufacture for La Esmeralda Tourbillon at the Grand Prix d’Horlogerie de Genève. The new Laureato Tourbillon epitomises this well-mastered expertise.

It is driven by the proprietary GP 09510-0003 movement of which the Tourbillon with its lyre-shaped carriage is composed of 81 parts weighing just 0.44 grams. This movement features automatic winding – in this instance enabled by a micro-rotor designed in such a way that it does not block the view of the movement’s beauty. Playing a starring role in this fascinating show, an arrow-shaped bridge holds the Tourbillon at 6 o’clock and thus imparts an immediately recognisable signature. In keeping with the aesthetic choices behind the development of the Laureato Tourbillon, this bridge is made of titanium. The entire movement is graced with finishes – chamfering, polishing, Côtes de Genève, circular graining – performed by the expert hands of in-house artisans.

Offering a fresh vision of elegance

The new Laureato Tourbillon is endowed with a powerful identity conferred by its octagonal bezel topping an integrated case extended by the metal bracelet with its wide supple links in a perfectly flowing design. The polished and satin-brushed surfaces create subtle depth effects and enliven the watch as it plays with light. Crafted from titanium, a light and ultra-sturdy material, it is intended for daily wear and designed to support the rough and tumble of a busy life without encumbering the wrist by an overly intrusive presence. It embodies a resolutely different, free-spirited, liberty-loving vision of elegance.

The traditional Clous de Paris hobnail dial motif lends structure and strikes a pleasing contrast with the sportier baton-type hour-markers. Blue accents on the latter as well as on the blued steel hands set the perfect finishing touches to the aesthetic harmony of the watch face.

With authentic panache and empowered by its horological content, the new Laureato Tourbillon takes its place within a line that is diversifying in an ever-attentive response to the demanding expectations of today’s men.