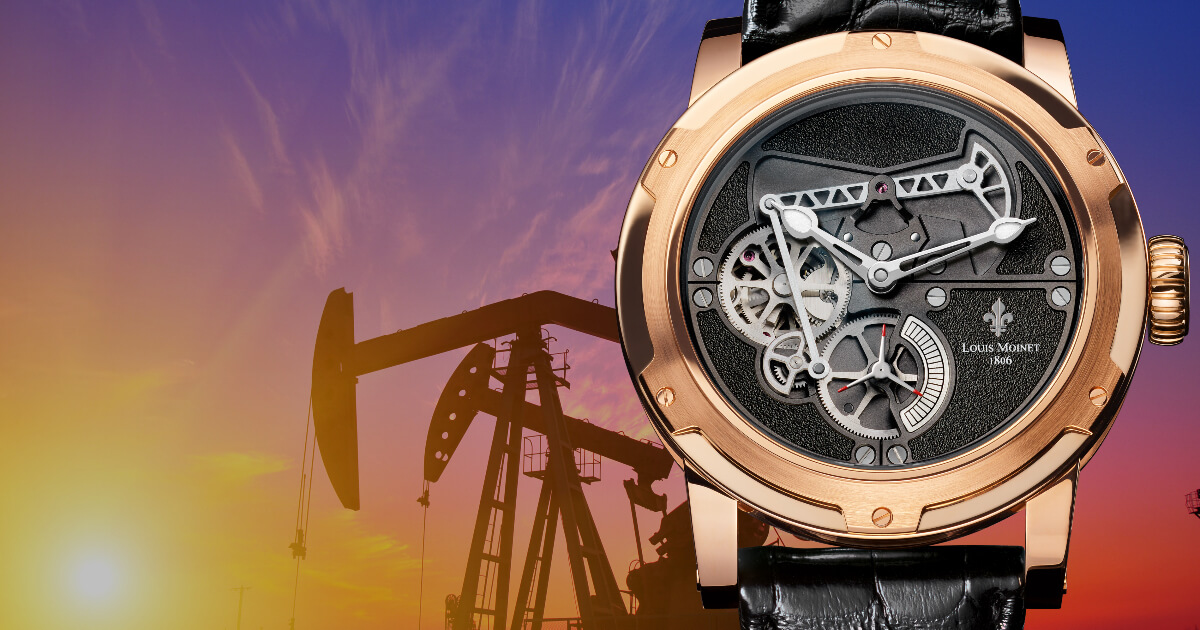 In 2013, Ateliers Louis Moinet presented a brand new watchmaking concept: the Derrick Tourbillon. This unprecedented timepiece combined all the fascination of an animated derrick with the regular beat of the tourbillon. Its fame has spread worldwide – and of course had its fair share of imitations.

The highly creative oil pumping system adorns the front of the watch. Its uniqueness resides in the essentialist ethos of the depiction. Only the traditional, distinctive components of the derrick are shown – the main shaft and horse head, the drive shaft, and its counterweight. The result is a powerful, minimalist display, with a cycle that repeats three times a minute.

Pulling off this technical feat required the use of an extremely lightweight, avant-garde material: the automaton has been made entirely out of brushed aluminium. It is powered by the watchmaking mechanism itself, which thus acts as the driving force for the entire assembly. Two wheels can be seen behind the derrick; the one located at six o’clock is used to display the seconds, on a dedicated segment.

While automatons themselves have been in existence since the late seventeenth century, there’s no denying that Derrick is one of the most spectacular ever seen. In a quest for contrast, Louis Moinet has chosen to showcase its pioneering system by placing it atop two black-coloured dials. The first, with a rather more traditional feel, features a hand-punched surface for a brilliant sheen. The second, with more high-tech overtones, offsets the derrick with a woven carbon fibre mesh.

To further accentuate the imposing character of this new creation, the first models are being made available in Louis Moinet’s legendary NEO case, cut from polished, satin-effect 5N rose gold. A whole host of new technical solutions have gone into the creation of the design – the likes of which have never before been seen in watchmaking.

Everything is constructed around two horizontal bridges, spanning the piece and securing the strap in place at each end of their lugs. A sapphire crystal on the back of the watch reveals the automatic mechanism and its oscillating weight – decorated with a concentric clou de Paris pattern.