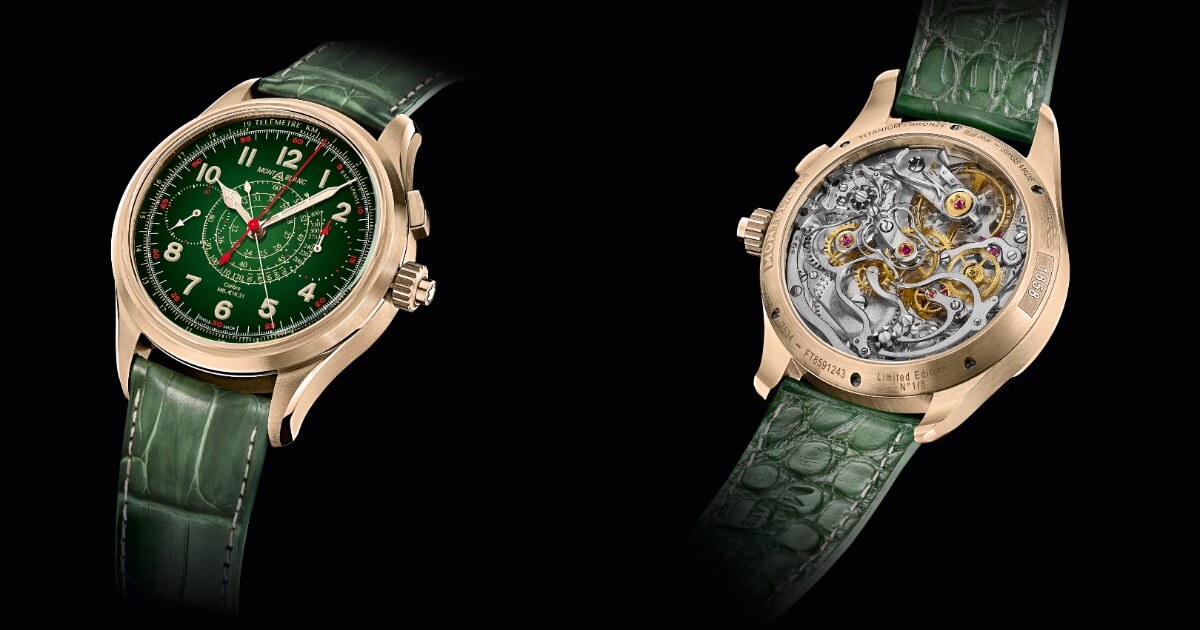 The Montblanc 1858 Split Second Chronograph Limited Edition 8 is a true watch for connoisseurs inspired by the heritage of Minerva with a distinctive vintage green aesthetic, reminiscent of the colours of Mexico. The dial is made of green Jade Nephrine, expressing the spirit of mountain exploration.

“Mexico has a strong community of watch aficionados that particularly appreciate the world of fine watchmaking and distinctive timepieces and we are pleased to introduce this new timepiece during SIAR” says Davide Cerrato, Montblanc Managing Director Watch Division.

The Montblanc 1858 product line is inspired by the legendary Minerva professional watches from the 1920s and 1930s which were conceived for military use and exploration. Reinterpreting these legendary models, the Montblanc 1858 watches express the spirit of mountain exploration, embodying the modern trend of returning and reconnecting to nature.

For this year’s SIAR, Montblanc is unveiling the Montblanc 1858 Split Second Chronograph Limited Edition 8, which combines a 44-mm bronze case with a distinctive smoked-green dial crafted from nephrite jade, a first for the Maison. Nephrite jade is one of two distinct mineral forms of this precious stone and is prized for its durability, toughness, translucency and lustre.

Inspired by the Mexican flag, the Nephrite jade green dial is paired with rose-gold-coloured elements and red accents that accentuate the vintage style, while also providing excellent readability of the complications both day and night. An anti-magnetized treatment on the inside of the sapphire crystal allows for greater precision of the two chronograph seconds hands. The chronograph indications are displayed via a rose gold-coated central chronograph second hand, a white-coloured split second hand (to measure a second time interval) and a chronograph minute counter at three o'clock.

Following the design of the original Minerva timepiece, the Montblanc 1858 Split Second Chronograph Limited Edition 8 features a telemeter scale that runs around the dial, which was a common feature on the legendary Minerva chronographs. A telemeter makes it possible to measure the distance of a phenomenon, which is both visible and audible, like the lightning and thunder in a storm. The chronograph hand starts when the phenomenon is seen (lightning) and is stopped when the sound is heard (thunder). The position on the scale shows the distance in kilometres separating the phenomenon from the observer (or the user from the storm, in this example). Calibration is based on the speed at which sound travels through the air, which is approximately 340 meters per second or 1,115 feet per second.

The timepiece also features a tachymeter (base 1000) at the centre of the dial in a colimaçon, snail shape, which allows the user to measure a length of time up to three minutes (instead of one minute in a traditional tachymeter scale around the dial). The tachymeter scale is to show the speed of a moving object, such as a car, over a known distance, measured in miles or kilometres. As the moving car passes the starting-point of the measured course, the owner starts the chronograph hand and stops it as the car passes the finishing-point. The number indicated by the hand on the tachymeter scale represents the speed in kilometres or miles per hour.

It is combined with a complex “rattrapante” (split second) complication developed by the Montblanc engineers that allows the user to measure intermediate times without interrupting the ongoing measurement of a longer elapsing time. The “rattrapante” can be admired through the sapphire glass of the case back like on a traditional timepiece with such a function.

The Montblanc 1858 Split Second Chronograph Limited Edition 8 is equipped with the hand-crafted Manufacture monopusher chronograph calibre MB M16.31 that features two column wheels, horizontal coupling and a power reserve of 50 hours. The movement takes its inspiration from the original Minerva calibre 17.29, developed in the 1930s, that was used for both pocket watches and wristwatches. This modern-day version is recognisable thanks to its beautiful hand-finishing such as Côtes de Genève stripes, inner angles, circular graining and bevelling as well as its fine details such as the recognizable Minerva arrow, a chronograph bridge shaped in the form of a “V”, and a large screwed balance that has a traditional frequency of 18,000 semi-oscillations per hour.

The timepiece features a matching green alligator strap with beige stitching that has been hand-crafted by the Richemont Pelletteria in Florence.

In order to guarantee the performance of the product line, the limited-edition timepieces undergo over 500 hours of simulated wear, with specific testing and controls under real-life conditions.

Chronograph: Monopusher with two column-wheels (one for the chronograph and one for the split second) and horizontal coupling

Plate: Rhodium-plated German silver with circular graining on both sides

·      Hours and minutes from the centre

Back: Screwed titanium bronze-plated case back with inset pane of sapphire crystal

Pushers: Monopusher chronograph integrated into the crown and one pusher at 2 o’clock for the split-second

Certified by the Montblanc Laboratory Test 500

The price for the Montblanc 1858 Split Second Chronograph Limited Edition 8 is €39,500 and it is available only at the Montblanc Boutiques in Mexico.