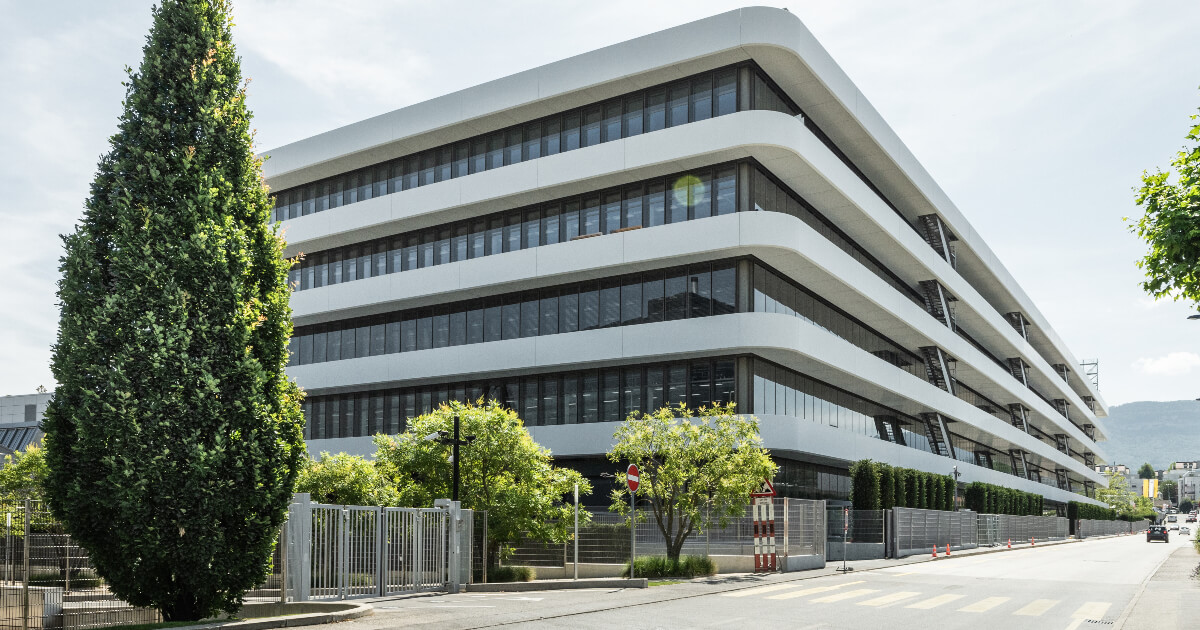 Beginning of 2020, the manufacture completed the construction work that had started in 2015 and initiated production activities in its new building on the outskirts of the city of Geneva. The highly modern architecture of this structure can unite all of the manufacture’s Genevan ateliers under one roof, a great advantage given the growing complexity of production operations. Moreover, it offers ample space for the rare handcrafts professionals and for basic and advanced training of the employees. With its impressive dimensions (10 floors and a length of nearly 200 meters), it expands the 1996 building complex and anticipates the manufacture’s growth in the next 20 to 30 years. The new building reasserts Patek Philippe’s Genevan roots and its confidence in the future of watchmaking artistry that perfectly melds tradition and innovation. The completion of the structure is being celebrated with the launch of a commemorative watch: The Ref. 6007 Calatrava in steel stands out with an exclusive design concept and will be crafted in a limited-edition of 1000 pieces (please read more about here).

In 1996, under the auspices of then president Philippe Stern, Patek Philippe announced a pioneering achievement: the inauguration of a new manufacture of unmatched proportions in Plan-les-Ouates. The company was the first brand to establish a presence in this Genevan suburb community that was later referred to as “Plan-les-Watches”. The objective at the time was to reunite under one roof the individual business activities that were previously distributed across over a dozen sites throughout the city and to thus secure the independence of the company in the long term. Although the new building was generously sized, it soon proved again to be too small to cope with the manufacture’s vigorous growth. For this reason, the exterior operations (production of watch cases and bracelets as well as gemsetting) were relocated to the neighboring community of Perly in 2003. In 2009, land was purchased to expand the plot in Plan-les-Ouates and an existing office building was converted into an atelier complex where, subsequently, all movement components were produced.

With the launch of the project for the construction of a new building, Thierry Stern – incumbent manufacture president since 2009 – pursued two goals: the relocation of the ateliers from Perly to Plan- les-Ouates and the provision of additional space especially for the growing production and training activities. The issue was not to noticeably increase the volume of watches produced from currently almost 62,000 pieces per year. Annual production is already limited in a natural way by the extremely strict quality directives of the Patek Philippe Seal. Instead, the last independent family-owned manufacture in Geneva wanted to secure efficient and rational production resources to cope with the expanding challenges of the present and the future.

During the past quarter of a century, the current Patek Philippe collection evolved at a brisk pace. Today, the complicated watches account for nearly half of all models. The “useful complications” (patented Annual Calendar, Weekly Calendar, Travel Time Two-Zone display, World Time) experienced rapid growth and clearly increased the required number of special mechanisms. Also, Patek Philippe’s customer-centric development philosophy resulted in a multiplication effect involving all the mechanisms that simplify the use of the timepieces, that increase operating integrity, and that enhance dependability, especially of grand complications. The result is a growing average number of components per watch. The strategy of Patek Philippe to broadly structure its current collection (simple watches, useful complications, grand complications, casually elegant watches, ladies’ watches, jewelry watches) and the product palette of over 160 models that are crafted in series ranging from a dozen to several hundred pieces fitted with an extensive selection of calibers crafted in-house also increase the need for production space. The situation is made more acute by the growing demand for highly elaborate rare handcrafts watches.

It all started with a small groundbreaking ceremony in October 2015. Five years later, the manufacture’s totally new production center now stands on a plot once occupied by the company’s parking lot.

The new Patek Philippe building stands out with impressive dimensions: 189 meters long, 67 meters wide, 34 meters above ground, with 10 floors, of which four subterranean. Its modern architecture accentuates the landscape of Plan-les-Ouates. The large-format glazing (abundant daylight is a must) interacts with white concrete passageways along the entire façade and the intermittent bronze-colored fire escapes in the New York style. The impression is that of a huge ocean liner with clearly defined forms. And as in Patek Philippe watches, the subtlety of the ensemble melds with exceptionally refined details such as the slight horizontal curvature of the passageways reminiscent of the gently rounded octagon of the Nautilus case, or the balustrades of the fire escape ladders with a silhouette that resembles the form of leaf-shaped hands.

Patek Philippe’s complete repository of know-how under one roof

The interior spaces are divided into five segments that are separated by four staircases and include 20 passenger and freight elevators. The ground floor and the first floor are reserved for production and manual finissage of movement parts (plates, bridges, wheels, form parts, etc.) while the focus on the second floor is machining, manual polishing, and the assembly of exterior parts (cases, bracelets) and gemsetting. In addition to the production of the current collection, these ateliers are also responsible for crafting the inventory of spare parts needed by Customer Service, a key success factor for Patek Philippe. The restoration of antique timepieces also takes place here.

The third floor accommodates further production-related departments such as Research & Development in the fields of new materials and new technologies (Patek Philippe Advanced Research), an haute horlogerie department, and a new unit for prototyping operations. The fourth floor provides space for further evolving and handing down of the rare handcrafts skills that Patek Philippe has actively promoted (manual engraving, enameling, guilloching, wood micromarquetry, etc.). In addition to an auditorium that seats 299 persons, the same floor also has rooms where watchmakers and staff members of the international sales network receive training.

On the fifth floor, the building is crowned by a penthouse restaurant for 880 guests as well as four VIP lounges, all with a fantastic panoramic view of the landscape and the nearby mountains. Wardrobes are located along a large “boulevard” in the first basement, allowing staff members to circulate freely before continuing on to their workstations at the different levels. The four basement floors also contain all building technology installations as well as a parking facility for a total of 635 vehicles.

A vision of tomorrow

With its envelope and technical equipment, the new Patek Philippe building complies with the “Haute Performance Energétique (HPE)” standards pursuant to the energy laws of the canton of Geneva. Thus, waste heat, for example, is used for heating purposes. An application has been filed for the Minergie-P label, the highest energy efficiency classification.

The total investment is CHF 600 million, of which CHF 500 million for the structure and CHF 100 million for interiors as well as the avant-garde technical resources.

The first relocations already took place in July 2019, when the production of caliber components was moved; since 2009, this operation had been housed in an adjacent office building which can now be razed. In February 2020, the ateliers for exterior parts and gemsetting left Perly and moved to their new premises. Nearly a quarter of a century following the inauguration of the manufacturing complex in Plan- les-Ouates, all of Patek Philippe’s activities in Geneva are once again clustered in the same location. Additionally, a generous amount of extra space is available to accommodate the brand’s growth in the next 20 to 30 years. These are ideal prerequisites for securing the success of the family-owned manufacture and preserving its independence for the coming generations.