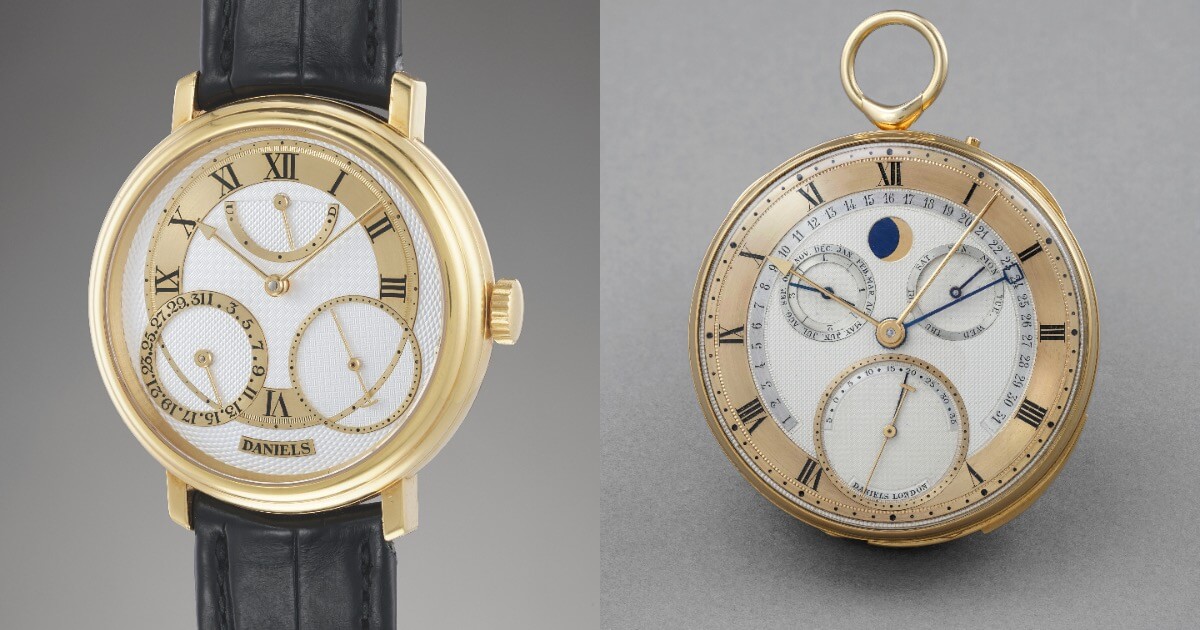 The sale of two masterpieces from George Daniels: The Grand Complication pocket watch and the Anniversary wristwatch

There are timepieces whose historical importance and relevance cannot be underlined enough, their mere existence being a demonstration of the horological genius of their maker. The George Daniels Grand Complication is definitely one of these incredible watches. Phillips in Association with Bacs & Russo is honoured to present at auction this exceptional timepiece. Fully hand-made by the Master, this pocket watch is one of the world’s most sought-after masterpieces, the absolute pinnacle of Daniels’ oeuvre and a grail for the seasoned watch collector.

This masterpiece is the star-lot that will be sold during The Geneva Watch Auction: NINE, a double-evening sale to take place at La Réserve - Geneva on May 11 & 12, 2019.

A mechanical tour de force, the Grand Complication stands apart in the Daniels production. Fully hand made by Daniels, it is the only timepiece he made to feature an instantaneous perpetual calendar with retrograde date and minute repeater, both mechanisms to Daniels’ own design. The sublime layout of the engine-turned dial, and the finesse of the gold case and gilt movement show the artistry of the maker, combining the majority of the complications incorporated in his earlier watches; moonphase, differential screw mechanism for the power reserve, bimetallic centigrade thermometer, Daniels keyless pendant and bow, Co-axial 1-minute tourbillon, and annual calendar with kidney cam and equation of time indication.

The Grand Complication was retained by Daniels for his personal use and was never sold during his lifetime, further underscoring the special significance of this watch. That this watch also incorporates the Daniels Co-axial escapement further elevates this timepiece to an even greater level of historical importance.

Unanimously proclaimed as the founding father of independent horology, George Daniels remains a true source of inspiration across the years and over entire generations of talented watchmakers.

Phillips in Association with Bacs & Russo will host a captivating and never seen before  horological exhibition in Geneva, that pays tribute to the most talented master watchmaker of the 20th century: Dr. George Daniels. The exhibition further supports an exceptional event in itself, the sale of two masterpieces from George Daniels: The Grand Complication pocket watch and the Anniversary wristwatch, both part of a hand curated selection of independent makers offered at auction by Phillips on May 11, 2019 at Geneva Watch Auction: NINE under the section Independents’ Atelier.

“Independents’ Day” The Legacy of George Daniels, a celebration of independent watchmaking is a one-of-a-kind exhibition, open to the public, that gives a unique occasion to view masterworks by thirteen independent watchmakers gathered in one place. This will be the first time ever these watchmakers and watches will be united under one roof and a truly exceptional opportunity for any watch aficionado to plunge into the world of fine watchmaking, by seizing the importance of Daniels’ extreme capacity to inspire, by his undisputed genius, future generations of watchmakers.

Exclusively held in Geneva, the Independents’ Day exhibition will take place from May 9 to 12 at Hôtel La Réserve, showcased alongside the timepieces of Geneva Watch Auction: NINE.

As a one-time opportunity, Independents’ Day will offer on view some of the most impressive masterworks of the 20th and the 21th centuries, including: