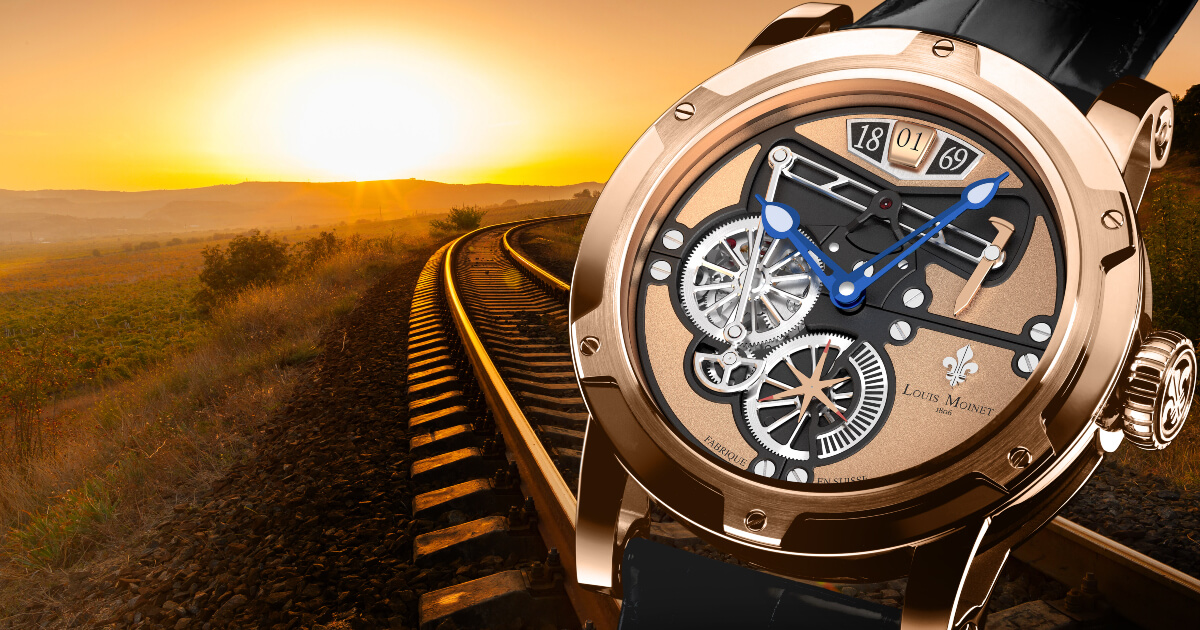 The “Transcontinental By Louis Moinet” Watch (Price and Specifications)

“Louis Moinet has its very own way of celebrating the 150th anniversary of the first transcontinental railroad connecting the Atlantic and Pacific coasts of the USA. The innovative mechanical creation in question is both a tribute to the pioneers of yesteryear and an invitation to those of the present day – for whom it is available on a pre-order basis of two limited edition of 18 and 69 watches.” Jean-Marie Schaller, CEO & Creative Director

The idea of building a railroad spanning the North American continent from one ocean to the other dates back to the early nineteenth century. It was a complex undertaking, with a huge continent to be crossed amidst an acute lack of technical and financial resources. Initially, President Thomas Jefferson convinced Congress to allocate $2,500 to Lewis and Clark, who organised the first expedition across the United States from east to west. They faced all kinds of danger – and took two years (1804-1806) to complete their mission. And so the adventure began…

Years of reconnaissance were then needed to identify the route: through the Sierra Nevada mountains, avoiding Death Valley, bypassing the Yosemite Peaks – as well as all the canyons and rapids of the Missouri. In 1862, even as the American Civil War raged, President Abraham Lincoln’s vision involved unifying and reviving the country. He promulgated the Pacific Railroad Act, allocating the construction of the railway to the Union Pacific and Central Pacific companies. Once work had started, each company drew nearer to the other at a rate of forty miles per month.

The project was finally completed on May 10, 1869. After 6 years’ effort, marked by a whole host of unexpected and varied challenges on a daily basis, the first transcontinental railroad was ready! The two companies’ tracks met at Promontory Summit, Utah, linking Sacramento, California to Omaha, Nebraska. A huge number of bridges and tunnels were required, in addition to 1,766 miles of track to connect with the existing railroad network in the east of the USA, thus linking the Pacific coast and the Atlantic coast.

This feat revolutionised the nation’s economy, demographics, and mindset. The age of covered wagons travelling along perilous trails was over; modern-day, powerful America had arrived!

East and West shook hands as the last piece of track was laid at Promontory Summit on May 10, 1869. To symbolise the event, a Golden Spike was driven in (later replaced by a steel crampon). This iconic symbol of the transcontinental accomplishment is now carefully preserved at the Stanford University museum in California.

Reserved For Today’s Global Pioneers Only: The “Transcontinental By Louis Moinet” Pre-Order

Louis Moinet has a particularly keen sense of human endeavour; previously, the manufacture has celebrated the exploits of cosmonaut Alexey Leonov and triple Formula One racing world champion Nelson Piquet. It has also supported tropical forest research with the Geograph Rainforest, as well as the installation of water wells in Africa with 123 Action.

Today, in a blend of respect and admiration, Louis Moinet is paying tribute to those who devoted all their energy and knowhow to pushing back boundaries and shaping the world as we know it. One hundred and fifty years after the first transcontinental railroad was completed, Louis Moinet has devised a commemorative watch, destined for the pioneers of the new world we have inherited.

In the spirit of the great human adventures of the nineteenth century, the “Transcontinental by Louis Moinet” pre-order is now open!

From now until September 10, 2019, it is being made available to the descendants of the transcontinental pioneers – as well as to forerunners and innovators everywhere. All of them will recognise the same unique values that enable them to successfully complete their own human endeavours.

1) Ensuring they will be able to possess this collector’s watch, of which there will be just two limited editions (18 watches in rose gold and 69 watches in steel and rose gold);

3) Benefitting from an attractive launch price, the pre-order amount is very reasonable: USD 57,500.00 in rose gold and USD 38,500.00 in steel and rose gold. It should be borne in mind that the retail price fixed after the pre-order period will be higher. In both cases, delivery will be carried out by one of Louis Moinet’s partner retailers.

Those interested in the pre-order are invited to request further details from:

The “Transcontinental By Louis Moinet” Watch

A clever automaton has been developed to reproduce the coupling rod systems on “Jupiter” and “119”, the two locomotives that made the final connection at Promontory Summit in 1869. A wheel arrangement comprises two large wheels and one small wheel, concentrating energy into continuous power.

The coupling rod passes on power to two reamed, anodised aluminium piston rods – except that here, rather than a piston, the system showcases a reproduction of the legendary Golden Spike, moving up and down in recollection of the thousands of crampons driven in all the way along the route.

The hours and minutes can be read off in the centre of the watch, while the seconds are displayed at six o’clock, on a segment representing the front of a locomotive.

The movement is an automatic winding mechanical movement.

Ateliers Louis Moinet have won 29 prizes over the past ten years, including a large number of design awards from all over the world. Creating meaningful pieces remains the Ateliers’ absolute priority.

“Transcontinental by Louis Moinet” plays on the contrast of a black plate and a rose-gold-coloured dial with a high copper content. While frosted decoration is a watchmaking classic, this particular finish is of an entirely different order. To produce such dense frosting, a micro structure was developed using laser technology. The individual number of each watch is engraved at 12 o’clock, on an 18-carat “Golden Spike” head, framed by the date – 1869.

Innovative technical solutions were devised to create an unprecedented case shape. Everything is arranged around two stylised, openwork bridges. These span the watch, securing the strap at either end of their lugs. The bridges hold the movement’s container – and the precious mechanical mechanism it houses – in place. Last but by no means least, the signature six-screw bezel, a hallmark of the Louis Moinet style, adds a distinctive touch to the piece.

The alligator strap, meanwhile, comes with a folding clasp decorated with another historic Louis Moinet symbol: the Fleur de Lys.

The box features an original design illustrating the 150th anniversary of the Transcontinental Railroad, with the inside done out to resemble the piping of a steam locomotive. A medal commemorates the event; at its centre sits a newly-fashioned crampon made from a genuine American rail spike dating back to the nineteenth century.

The “Transcontinental By Louis Moinet” Watch