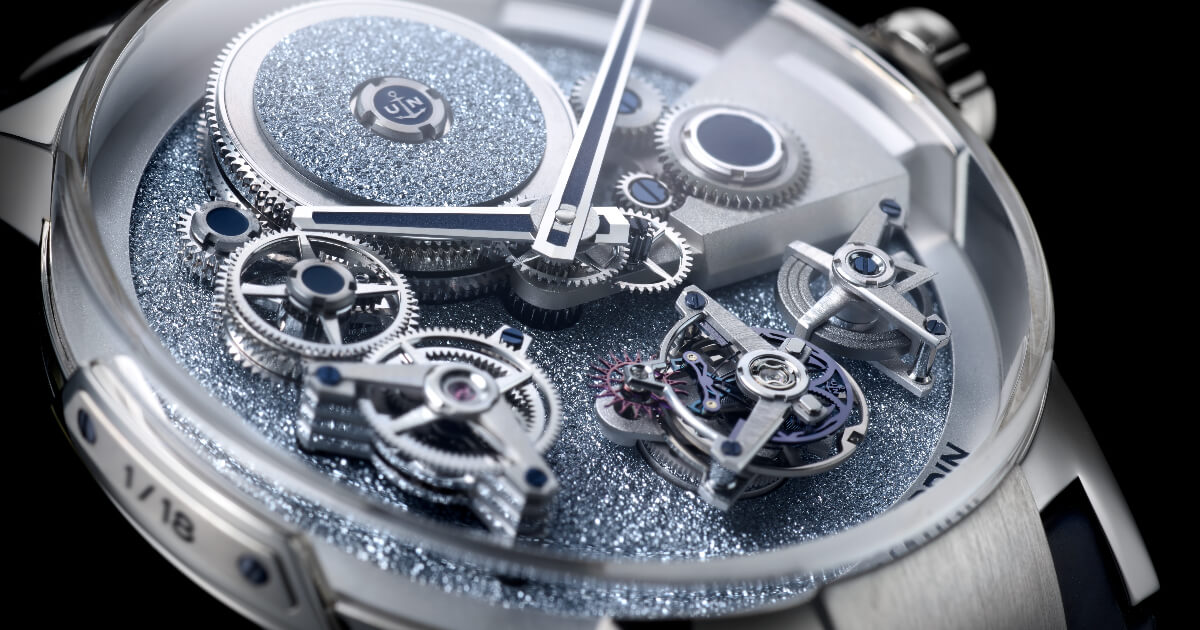 The Ulysse Nardin’s Executive Tourbillon Free Wheel is a poem of mechanical mastery, a symphony of aesthetic artistry and a highly functional work of art. A tour de force in mechanical watchmaking, the Free Wheel has a fantastically futuristic movement that makes it the Swiss watch manufacture’s most refined and audacious timepiece to date.

Today, Ulysse Nardin gives a new shine to its Executive Free Wheel by using four daring materials on its dial and barrel cover, making it a visual feast for the watch connoisseur. Manufactured in a limited edition of just 18 timepieces for each design, each watch is as unique as its wearer.

With a dial made from osmium - which is not only the world’s heaviest metal but also the rarest and densest, most stable element - this version of the Free Wheel has a white gold case which frames the diamond-like osmium crystals. Osmium, atomic number 76 in the Periodic Table of The Elements, is a trace element found in alloys mostly in the platinum group and used by manufacturers when extreme hardness is required. Incandescent, it is a siren song of engineering and esthetics.

The deep blue aventurine dial is reminiscent of the starry night sky glittering with reflections of the stars. A form of translucent quartz, the name “aventurine” derives from the Italian a ventura, which can mean “by chance” or simply “let the adventure begin”.  Also used in the Ulysse Nardin men’s Blue Aventurine Genghis Khan 789-80, this mineral’s aventurescence provides a shimmering effect often seen by sailors contemplating the ocean’s surface in the dark of night.

Straw Marquetry: An Ancient Technique Brought Up To Date

Made using a rarefied, 17th-century technique once practiced by nuns in convents, straw marquetry has been revived with new glory and used by Ulysse Nardin to adorn the face of this Executive Free Wheel model. Lightweight straw means there is no issue of pressure on the dial and barrel cover. The face design uses shiny, black-dyed straw – every stalk cut and prepared by specialized artisans – adding a sleek, masculine veneer to the dial.

Naturally resistant to the effects of time and capable of catching light to create a stunning visual effect, straw marquetry is a master craft in and of itself. Straw is split with painstaking precision, dyed with textile dye then applied onto the dial and the barrel cover. It is a distinctive way to explore precision in a pattern design. Not only does this ancient method bring poetry to a complicated timepiece but it also protects these métiers from extinction.

Composed of aeronautical-grade carbon fibers, Carbonium is approximately twice as light as aluminum. The carbon and pre-pregnated resin composite is made with ecologically-sourced components, making a markedly smaller impact on the environment than any conventional carbon composite. Aesthetically stunning, Carbonium Gold is a product of the intimate fusion of carbon filaments and gold particles within a thermosetting matrix. The resulting gold-veined effect is bold and elegant.

About The Executive Free Wheel

With a 7-day power reserve, its “free-floating” elements seem to move independently of each other to defy gravity. The Silicium technology, which was pioneered by Ulysse Nardin, allows for minimum friction and for the replacement of more traditional watchmaking components, such as precious stones.

The elements of the Executive Free Wheel literally make time fly. The innovative movement, which took years to research and develop, is presented in a 44mm case. The gear trains and bridges appear to float in the air with the other components, a delicate balance of parts working in harmony. The entire UN-176 movement was developed at the Ulysse Nardin Manufacture in Switzerland. Designed for the true watch connoisseur, the Executive Free Wheel – in all of its incarnations – is a perfect coherence of engineering and aesthetics.

The external beauty of each piece showcases the mechanical prowess that has blazed new trails into uncharted waters, allowing modern-day Ulysses to venture fearlessly into their dreams equipped with efficiency and elegance.