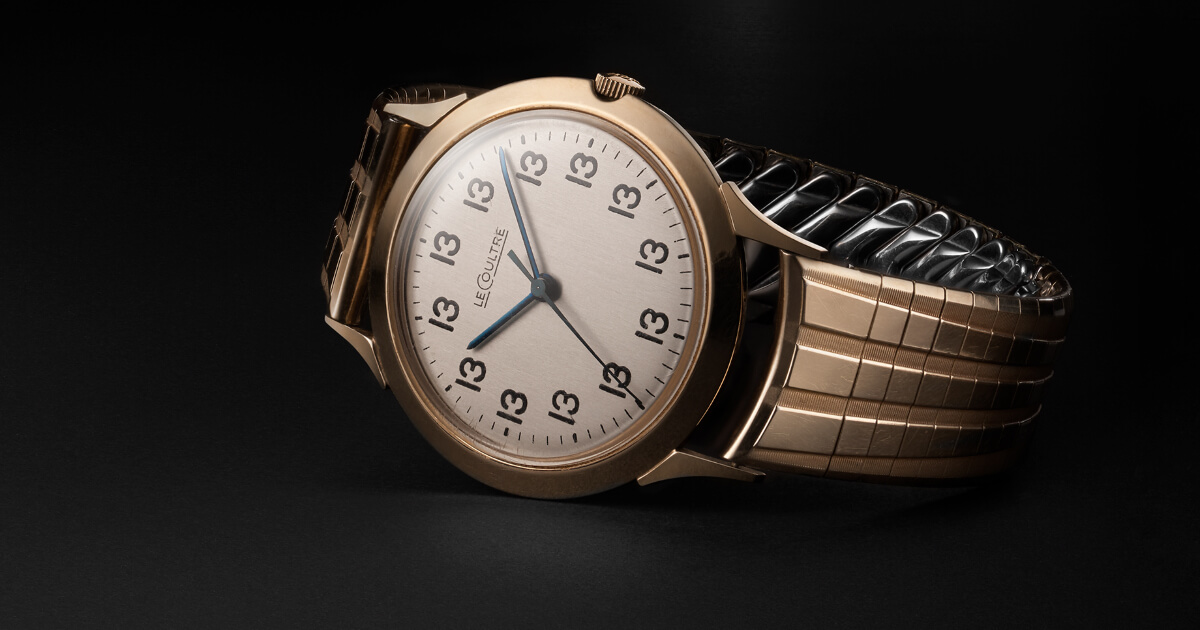 Throughout its history, Jaeger-LeCoultre has been driven by the spirit of inventiveness, its expertise rewarded with more than 400 patents, and its watchmakers’ technical skills and creative imagination embodied in more than 1,200 different calibres.

As these two rare watches from the mid-20th Century demonstrate, every decade has brought fresh ideas and solutions, reflecting the spirit of the times. Among the many changes brought by the 1950s and 60s – represented by each of these watches – were, on one hand, tremendous advances in technology and aerospace, and on the other, the transformation of diving from a challenging pursuit to a widely practised leisure activity.

In 1950, Jaeger-LeCoultre introduced its first wristwatch featuring an alarm and called it the Memovox (‘voice of memory’). As the model become one of the most desirable and reliable on the market, the company introduced different variations, including a date display, a self- winding version and even an alarm designed to time parking meters.

In 1959, noting that diving had begun evolving from a specialist pursuit into a recreational sport enjoyed by thousands, Jaeger-LeCoultre decided to adapt the Memovox to the sea. The company realised that it could offer both a visual timer (on the inner bezel) and an auditory alarm (which also caused vibration against the case) for ultimate diver safety.

To do so, Jaeger-LeCoultre created a patented, multi-layer case-back that optimised the alarm’s sound transmission under water. The outer case, with its 16 holes, allowed for the alarm tone to be heard and also felt on the wrist, while the inner case sealed and protected the movement.

Known in the United States as the Polaris, and in Europe as the ‘Montre de plongeur E859’, the reference E859 featured three crowns, each with the cross-hatch pattern characteristic of SuperCompressor watches. The first crown is for time setting, the second rotates the inner bezel for dive timing, and the third rotates the central disc to align the arrow with the alarm time.

The example being offered by Phillips was made in 1967 for the American market and stands out from other models thanks to its very rare dial markings. While most of the dials were stamped Memovox or bore no inscription other than the LeCoultre name, this watch is stamped Memodate.

Perhaps the most fascinating thing about the Memodate Polaris is its combination of two apparently opposite aspects of watchmaking: the tradition of delicate aural complications and the needs of a practical sporting timepiece.

The LeCoultre “Lucky 13” is a truly remarkable and unique watch presented by the Chicago Anti-Superstition Society alongside 13 U.S. Senators to an original Mercury Seven U.S. astronaut to commemorate his historic achievement of becoming the first American astronaut to orbit the Earth.

Featuring the number 13 at every hour marker, the watch celebrated the Friendship 7 spacecraft capsule used for the Mercury-Atlas 6 mission. Friendship 7 was the 13th space capsule produced by McDonnell Aircraft Corp, and the 13s on the dial were used to illustrate the society’s rejection of the number 13 as unlucky.

The ceremony, taking place on Friday, April 13th, 1962, was entered in the House Congressional Record on October 13th, 1962. The consignor intends to donate a portion of the proceeds of the sale of this watch to The John Glenn College of Public Affairs at The Ohio State University.