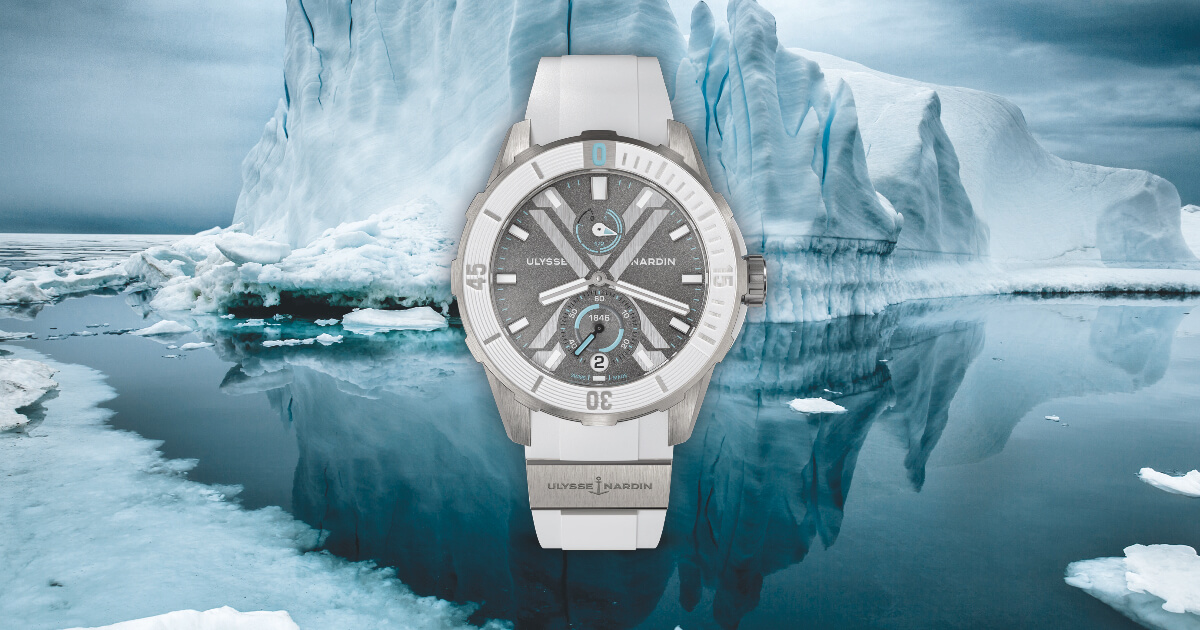 Terra Australis, as Antarctica was formerly called - the last continent to be discovered and the Earth’s southernmost, most hostile landmass - has been a source of fascination for explorers, scientists and historians for the two centuries since it was first sighted. A place of mystery and intrigue, the frozen tip of the planet has been fabled destination and source of fascination since Aristotle wrote about a possible Antarctic region in his tome Meteorology circa 350 BC.

In an ode to the essence of exploration and all it entails, Ulysse Nardin has designed the Diver X Antarctica. An avatar in the world of watchmaking, the Antarctica model of the Diver X is a watch that brings the “X-factor” to tackle world’s roughest seas - in honor of the modern-day Ulysses who choose to risk exploring this daunting, dangerous place, literally located at the end of the Earth. With its light blue icebergs and frozen ocean, beacons of an age long past, Antarctica has no latitude coordinates, only a location of 90° longitude.

Sebastian Copeland is a photographer who uses his artistic work to communicate messages of urgent global significance. A friend of the Swiss watch manufacture Ulysse Nardin since November 2019 he joined the brand’s armada of modern explorers known as “Team of Ulysses” together with other free-spirited watermen and women: Fred Buyle, Alex Caizergues, Mathieu Crepel, Sebastien Destremau, Ben Thouard and Alessia Zecchini.

Sebastian’s images have been seen around the world and his books are a reference for modern explorers as well as for those merely curious about the extreme climate; the cold, dry and windblown, least inhabited continent on Earth.

On the centennial 2011-2012 season of the South Pole, with partner Eric McNair-Landry, Sebastian spent more than his fair share of time in the field, witnessing this marvel of time untouched firsthand. He led the first East/West transcontinental crossing of Antarctica by skis and kites via two of its poles, setting three world records over the 4100 kilometers during an expedition through the polar desert that lasted a grueling 82 days. Sebastian is planning a new expedition to cross the Arctic Ocean in 2021.

The fruit of Sebastian’s labor has been seen on the National Geographic Channel, CNN, in the New York Times and Paris Match, among others. He is a devoted proponent of environmental conservation and his published books are a living testament to his crusade. “Helping people fall in love with their world,” he says, ”is a catalyst to wanting to save it”.

A polar symphony of light and ice, the Ulysse Nardin Diver X Antarctica is an extension of his deep love and respect for the planet. “Ulysse Nardin is a brand as devoted to our planet’s oceans as I am. I believe that our partnership will bring important benefits to all parties concerned and, hopefully, raise awareness of what we need to do to take better care of this great blue planet.”

A matte white rubber strap recalls the clean and austere lines of the Earth’s Southernmost Continent with ice blue touches on the dial reflecting the icebergs floating in the sea there.  The Ulysse Nardin brand element is prominent under the sand-blasted dial.

The bezel - in a white rubber - matches the watch strap. Its UN-118 movement guarantees accuracy in any hemisphere at any time of the day or night. The gray face is marked with a bold and elegant “X”. The crown, horns and case back are all made from titanium.

The stamp on the back of the watch details not only the coordinates of the Antarctic Continent: 90° longitude (with no latitude necessary for the landmass located at the southernmost tip of the Earth) but also the route of the Vendée Globe sailing race, of which Ulysse Nardin has become the official sponsor.

·      Small direct seconds and round date window at 6 o’clock

Case back: Stamped with the route of the Vendée Globe

The price for the Ulysse Nardin Diver X Antarctica is 8,900 CHF.