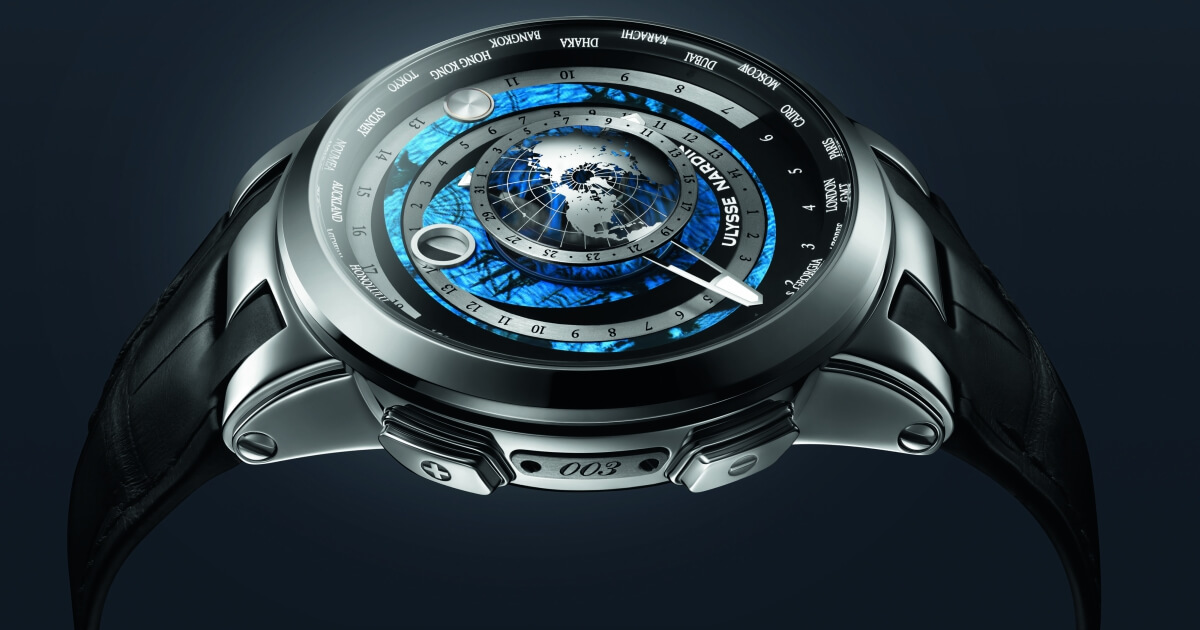 Simplicity through watchmaking eloquence: this new model remains the only watch to depict the movements of the moon and sun in relation to the Earth, as well as a map of the tides.

Our solar system is composed of a star, eight planets, 175 satellites, and billions of particles of interplanetary dust. And yet, human beings spend their whole lives alongside just two celestial bodies: the sun and the moon. Since the beginning of time, they have featured in all faiths, embodied in every symbol, and fascinated every civilization. Their path through the sky, so familiar, and their power over the tides, are the basis of the new Moonstruck Worldtimer.

Leonardo da Vinci once said that simplicity is the ultimate sophistication. Ulysse Nardin has made this saying the cornerstone of its philosophy. In its purest definition, the Moonstruck Worldtimer recreates the moon's orbit and the apparent movement of the sun around the globe. Its celestial ballet, just as it is seen from the Earth, is unlike anything an astronomical watch has previously offered. This intuitive display hides a sophisticated mechanism that provides an unusually accurate indication of the phases of the moon.

In the center of the dial, the Northern Hemisphere is depicted as seen from above the North Pole. Six o'clock in London represents the Greenwich meridian, marking Greenwich Mean Time. Three concentric discs turn around this fixed map of the world. The outermost circle features a symbol representing the sun. This solar disc, which completes one revolution in 24 hours, also sweeps over a display of 24 time zones and is equipped with a day/night indicator. These markings control the Worldtimer function, allowing the wearer to simultaneously display the time in the 24 cities inscribed on the internal flange.

As for the moon, this appears on a lower orbit. Two discs work together here: on top, the first functions as a circular window showing the position of the Earth's satellite; below, the second disc, in gold, shows the changing phases of the moon. By separating this unique display into two rotating parts, Ulysse Nardin has accomplished such a high level of precision that the time lag for each lunar month is just 5.7 seconds per day, or one day in 40 years.

Eight years after the first Moonstruck made its mark, the Moonstruck Worldtimer (References 1069-113/01 1062-113/01) remains the only astronomical wristwatch with the bright part of the moon always facing the sun, as happens in real life. The dial also displays a particularly easy-to-read map of the tides, which is the result of the gravitational forces of these two celestial bodies, as well as of the centrifugal force exerted by the rotation of the Earth. This sometimes exaggerates or cancels out the influence of the oceans.

Equipped with silicium technology, and entirely designed and produced in-house, the self-winding calibre UN-106 housed in the Moonstruck Worldtimer once again offers a date function, on a track encircling the world map. Push buttons at 8 and 10 o'clock enable the wearer to quickly move the time forward or backward by one hour - a very handy feature while travelling or when switching to summer time. The UN-106 has a power reserve up to 50h and runs at 28'800 v/h.