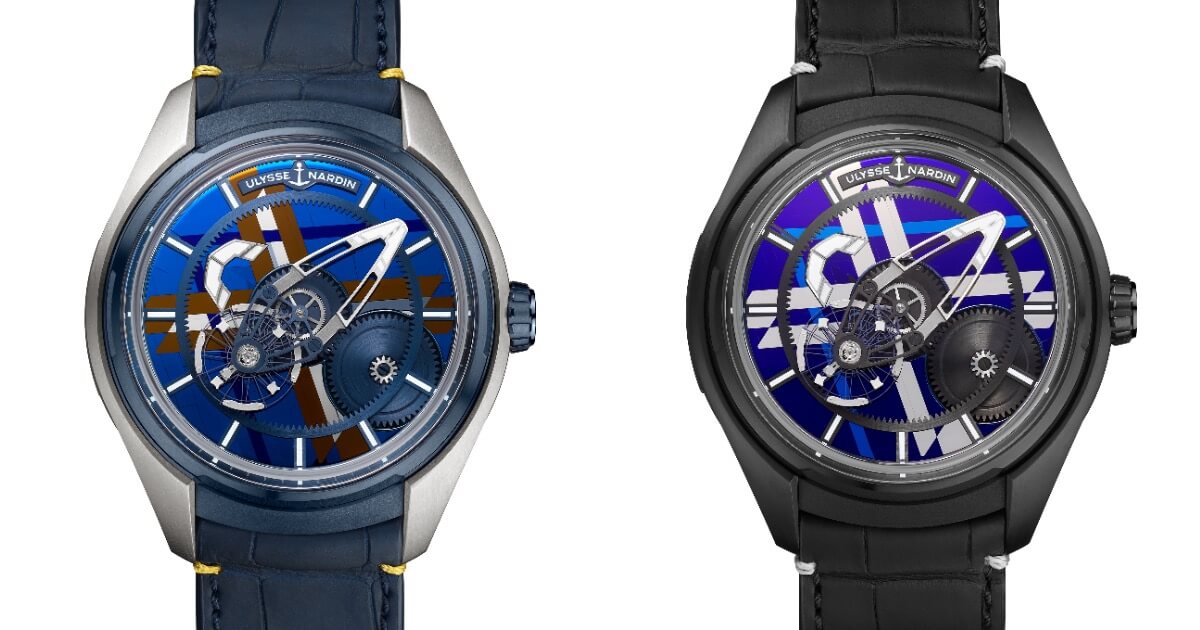 The master of silicium since 2001, Ulysse Nardin continues on its exploratory trajectory and has turned a material originating from the electronics industry into an authentic medium of artistic crafts-manship. After the launch of its “X” Collections at the Salon International de la Haute Horlogerie in Geneva (read more about here), the watchmaker now presents two astonishing new FREAK X models, embellished by a decorative technique that had hitherto been almost totally undiscovered: silicium marquetry. A revolutionary material par excellence, silicon had already proved its worth in Ulysse Nardin watch movements. It now exhibits its virtues on its watches’ dials.

A totally new revelation in the world of watchmaking, silicium marquetry involves assembling wafers of silicon cut into segments with a plasma accelerator. All the subtlety of this technique lies in the crafts-man’s dexterity, given that the silicon used is extremely flaky and fragile when moved. Slightly superim-posing the segments one on top of the other, rather than interlocking them, will be enough to chip their edges. It thus represents a veritable feat of “technological craftsmanship”, assembling by hand a collage of the roughly 120 segments needed to create these astonishing mosaics. The end result has a unique impact, as the eye is dazzled by the glittering marquetry, resembling a bevy of interacting laser beams.

The marquetry dials of these two new versions of the FREAK X watch, a gilded “X” on a cameo of shades of blue in the one case, and a silvery “X” on a purplish-blue background in the other, are both extremely reactive to light. Silicium marquetry offers a spectacular display of reflections of unmatched brilliance, with some 120 fragments of different sizes and shades illuminated as the light sweeps around the dial like the beam of an X-ray!

Like a younger relative of the original Freak models, the FREAK X watch makes its debut as the entry point into the FREAK collection. Though many of the same aesthetic and functional elements are in place, it pushes out into uncharted territory. The sizing is tighter - 43 mm instead of 45 mm - but it is easi-er to read and operate. It has a crown for time correction, which breaks with one of the most iconic as-pects of the crown-less FREAK VISION or FREAK OUT models, which correct time by the bezel. The “ba-guette” movement is still a carousel, turning once on itself every hour to indicate the time.

It is simpler, bolder, and has fewer wheels. It has no dial and no hands - the central bridge acts as a minute hand and one of the wheels indicates the hours. Inside and clearly visible beats one of the FREAK VISION’s most outstanding innovations: a super-light balance wheel in silicon, extra-wide, with nickel flyweights and sta-bilizing micro-blades The movement itself, the new UN-230, is a fusion of the manufacture calibers UN-118 and FREAK VISION UN-250.The case, nicely rounded with curved lines, is wholly new, and seriously transformative.

·       Flying carousel manufacture movement rotating around its own axis

·       Indexes and bridges with Superluminova

The price for the Ulysse Nardin Freak X Marquetry is Euro 29,500.