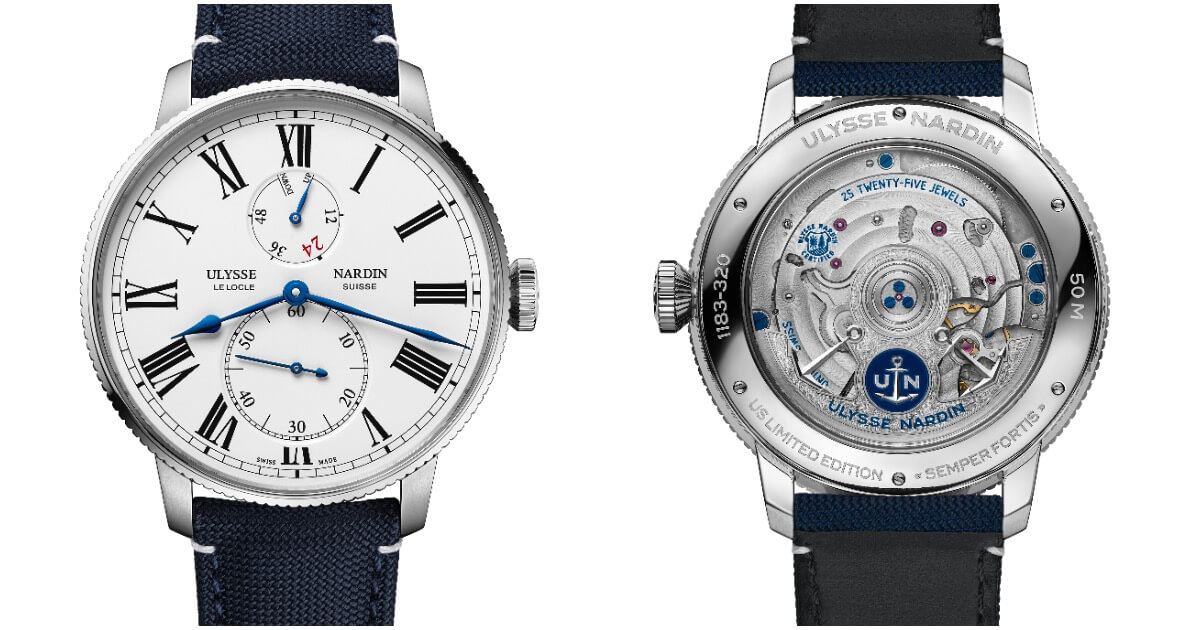 Ulysse Nardin brought the Marine Torpilleur Military US NAVY timepiece to Annapolis, an ideal ven-ue for the American launch, celebrating the ties between the brand and the United Stated Naval Academy since 1905.

A Story Of Time

The pioneering partnership between Ulysse Nardin the United States Navy began in 1905, when the Washington Naval Observatory organised a competition for ‘Precision Torpedo Boat Timepieces’. The goal of the competition was to supply the US Navy with the best available on-board chronometers. These precision timepieces, given to superior naval officers, were meant to provide the torpedo boats with an hour of reference as accurate and reliable as those on the largest naval vessels. Ulysse Nardin won the competition several years in a row and became the official supplier of the American Navy.

“Semper fortis”, “always strong” - the US Navy motto, equally describes the philosophy of Ulysse Nardin and its engineering team, which carries within its proud traditions a stalwart drive for reliability and an un-wavering determination to master the measure of time.

The Ulysse Nardin team called upon the totality of its horological experience to create the first on-board chronometers, which quickly gained a peerless reputation among navies around the world.

Using that same savoir-faire today, Ulysse Nardin has perfected the Marine Torpilleur Military US Navy, the new US Navy Torpedo Boat watch. A limited edition of 173 pieces - for the 173 years since Ulysse Nardin founded the company - it pays tribute to the brand’s unmatched marine heritage. The 44 mm wrist chronometer carries the DNA of its ancestors, the historic US Navy timepieces of the past. Guaranteed water-resistant to 50 meters, its sapphire-protected dial is faithfully based on the first on-board timepieces to equip navy vessels.

The blue hands, too, are identical to those on the earliest pieces. Precision is guaranteed by the certified UN-118 automatic-winding movement, which uses Ulysse Nardin’s cutting-edge silicon technology and has a 60-hour power reserve. One of the more striking elements of the de-sign is the number “24” written in red on the power reserve indicator, a direct reference to the warning system on the original marine chronometers, which let sailors know that only 24 hours of power reserve remained and that the watch needed to be rewound immediately. The open case back is laser engraved with “US Limited Edition” and the “Semper Fortis” motto. Four oversized stitches adorn the blue sailcloth strap, another reminder of its storied past.

The Ulysse Nardin Marine Torpilleur Military US Navy is a magnificent representative of the brand’s origins and continued prowess - a guardian of marine history and a modern archetype turned decisively towards the future.

The price for the Ulysse Nardin Marine Torpilleur Military US Navy is $7,900 and is limited edition to 173 pieces.