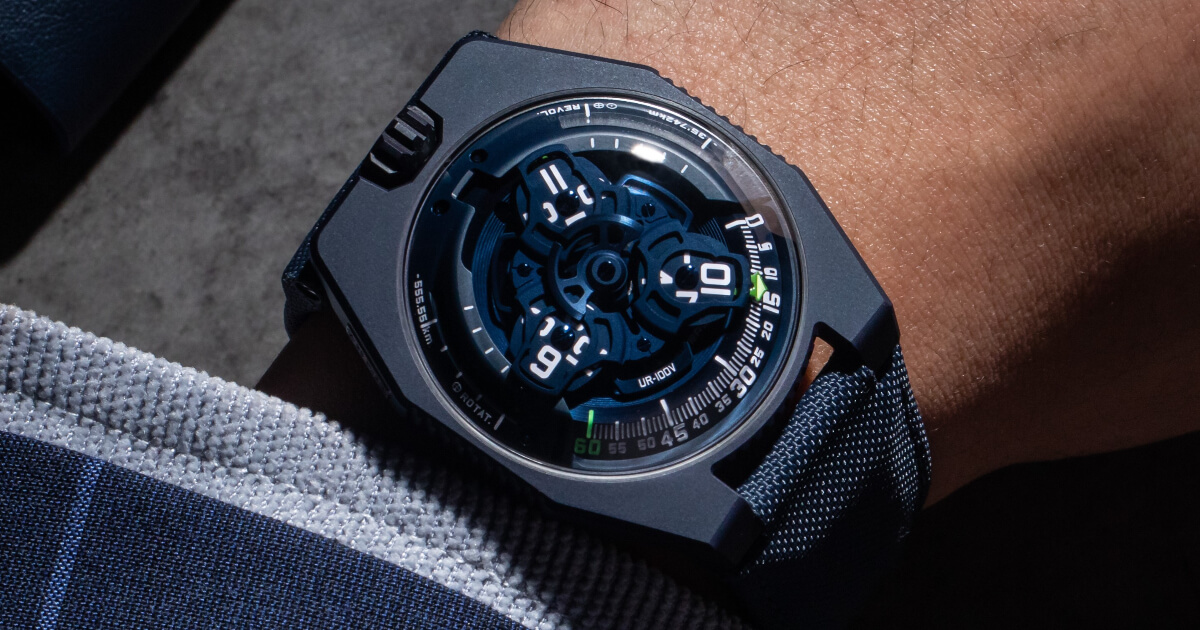 Urwerk’s horological Skunk Works launches a series of 25 time - and space - measuring instruments into orbit. UR-100V “Blue Planet” tracks the earth and our solar system: it’s a 24-hour invitation to interstellar travel and the pleasure of savoring time.

The astronomical action takes place under a large observation dome, where, upon finishing indicating the minutes in the 0-to-60 arc along the bottom of the dial, the vivid green and yellow arrowhead hand (one of three) disappears – only to reappear at 9 o'clock to track the 555.55 kilometers the earth rotates at the equator every 20 minutes. The hand then reappears again at 3 o'clock to display a kilometer counter tracking 20 minutes of the earth's revolution around the sun (35,742 kilometers).

Blending form and function, calculation and imagery, and theory and actuality, the UR-100V is adorned in blue: blue for the steel case, blue for the atypical movement, blue for the orbital carousel. A blue recalling our planet earth.

The blue hue of the UR-100V “Blue Planet” is deep, dense, and matte. As Urwerk’s designer Martin Frei explains: “When I create and when I paint, all colors resonate in me, but particularly blue. During my education at the Academy of Arts and Design in Lucerne, I had the chance to study the great Florentine artist Giotto. He was the first who, at the end of the Middle Ages, painted the sky blue — dethroning Byzantine gold — and launching the ‘realistic’ style of painting is normal today. I love the color of Giotto’s blue sky; it’s the same sky as ours. Blue is a color that surrounds us, that encompasses us. "

Almost all of the elements of the movement, including the automatic rotor regulated by its Windfänger turbine and the entire satellite hour display system, are also blue – as are the technical canvas strap and buckle. The most visible screws are in flame-blued titanium using a technique unique to the Baumgartner family. “My father was cult-like in his devotion to the technique of bluing hands. His search for the perfect blue was his search for the Holy Grail. He tested countless types of sand and found his grail in Corsican sand, which we religiously brought back in our suitcases from vacations,” says watchmaker Felix Baumgartner.

Against this uniform blue background, the fluorescent yellow and green arrowhead hand is a shooting star.

The color of the UR-100V “Blue Planet” tells the story of a trajectory transitioning between earth and space. “We have miniaturized and reinterpreted our solar system. We get lost in the depths of the rotating carousel of the UR-100V. It is a plunge into space, a fall into nothingness. It's a new horological odyssey with our head in the stars and feet on the ground. It’s a reverie in blue,” concludes Felix Baumgartner.