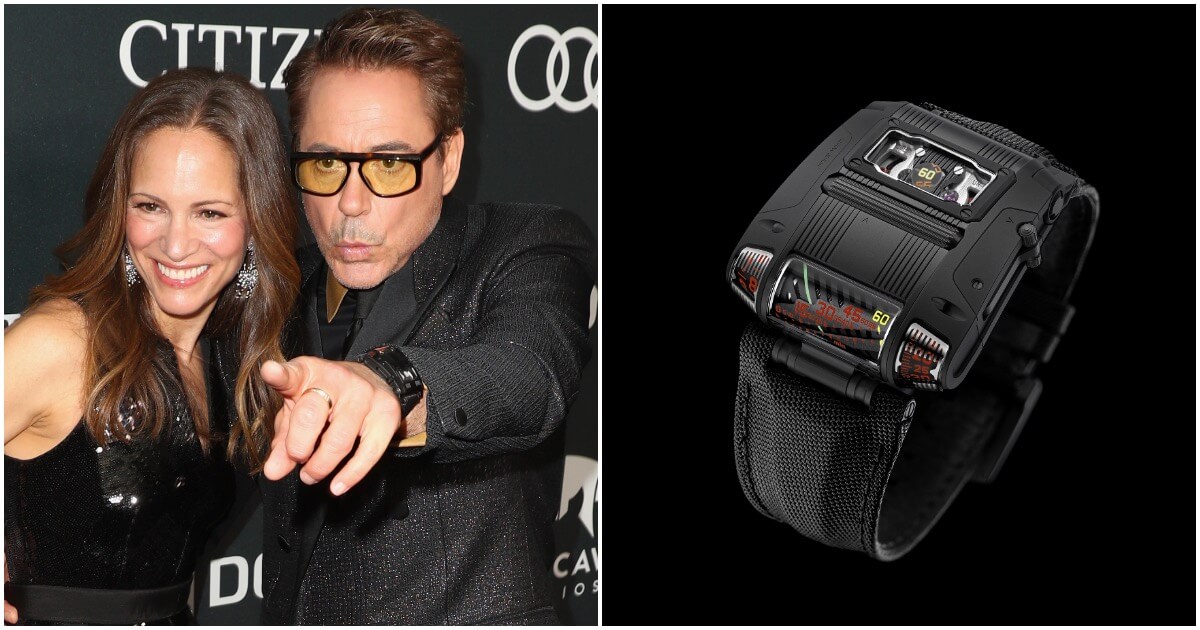 Urwerk With The Avengers In The End Game

Iron Man Tony Stark is certainly the most charismatic Superhero of the moment. The fictional inventor with his own high-tech laboratory is a genius. He is clever, handsome and rich in short, the ultimate glamour Nerd.

So, when he has to save half humanity in Avengers: Endgame, the instruments on his wrist have to be Urwerk’s awesomely sophisticated UR-105 CT Iron and the futuristic UR-111C Black Cobra.

Since its launch, last April 26, Avengers: Endgame has set records as the fastest grossing movie and the biggest hit both in China and the USA. Urwerk is thus immensely proud to be part of the action, having cultivated friendly relations with Robert Downey, who plays Tony Stark. The actor invited Urwerk to join the superheroes at the shooting of Spiderman: Homecoming in 2017, and that led to Urwerk featuring in   the final Avengers series.

Robert Downey proudly displayed the UR-111C Black Cobra on his wrist at the movie’s Premiere last April 22 in Los Angeles. This mechanical timepiece, which Urwerk unveiled at Baselworld 2019, is made in a limited edition of 25. It is part of the Special Projects collection of watches that depart from the brand’s signature series of wandering-hour complications. The UR-111C is unashamedly futuristic, displaying the minutes both digitally and on a linear track, as well as jumping digital hours and optically transmitted skeletonized seconds. In keeping with this model’s radical departure from convention, Urwerk has reinvented the winding crown. “Science fiction has always been a source of inspiration for me,” declares Urwerk’s chief designer and co-founder, Martin Frei, “and you can see its influence in every model we create. This time we’ve gone through the looking glass. Fiction has overtaken us and absorbed us into its world. It’s magical!”

The UR-105 CT Iron also enters the fictional domain on the wrist of Iron Man Tony Stark. Showing a picture of the watch in action here would be a spoiler, but this selfwinding watch is fundamentally distinctive among so many original timepieces.

You have to slide the catch on the top of the case to reveal the mechanism of your UR-105 CT Iron. It’s a wandering hour indication based on an openwork carousel, which carries the four satellites, each bearing three numerals for the hours. The hours successively sweep past the minutes scale for an analogue and digital display of the time. A power-reserve indicator and digital seconds make up the rest of the information displayed on the dial. The digital seconds are remarkable in that the mechanism was made using a photolithographic process, with each 10-second marker openworked to make it as light as possible. It thus weighs less than a tenth of a gram.

Two pneumatic turbines on the back govern the selfwinding rate, which can be set with a lever. In the FULL position, the slightest movement of the wrist is harnessed to rewind the barrel springs. Turn the lever to STOP to disengage the selfwinding system and wind up the UR-105 CT Iron using the crown. If you are particularly active, select the intermediate position, RED (for reduced). This engages the turbines to dampen the winding rotor and avoid overstressing the mainspring.

It’s now up to you to discover the fate of the Tony Stark’s watch and of the planet on the big screen.

The price for the Urwerk UR-111C Black is CHF 130,000 Swiss francs – tax not included and is limited production of 25 watches.