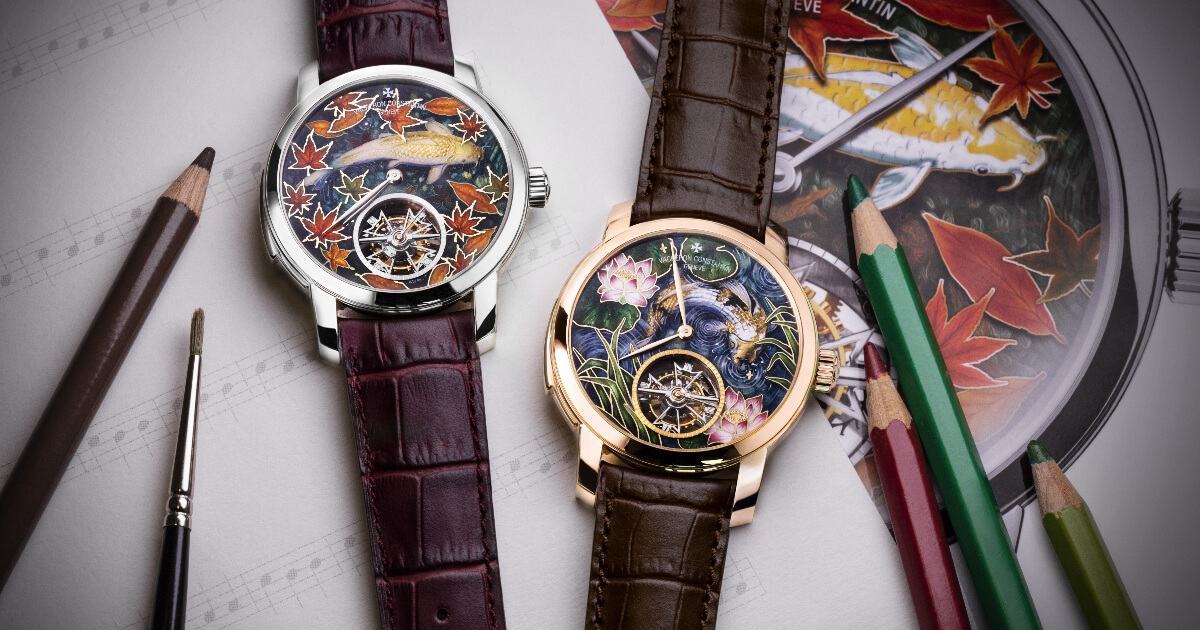 •      « La Musique du Temps": an assortment of one-of-a-kind models created within the Les Cabinotiers department as a tribute to the musical arts.

•      As partners of the Maison, Abbey Road Studios have recorded an original sonic print issued as a unique certificate for each of these pieces.

Les Cabinotiers Minute repeater tourbillon – Four seasons are four new one-of-a-kind creations conveying the rich tones of the crafts cultivated within the Maison. Masterpieces of engraving and enamelling, they are an invitation to admire dials graced with striking naturalistic symbolism. To set the tempo for these four watches, Vacheron Constantin chose its 2755 TMR calibre, combining the precision of a tourbillon regulator with a minute repeater featuring the Manufacture's latest developments.

In 1941, Vacheron Constantin combined technical prowess with aesthetic perfection by introducing its ultra-thin minute repeater wristwatch. This mechanism, which strikes the hours, quarters and minutes on demand using two gongs, is presented in an ultra-thin gold model radiating the characteristic elegance of Vacheron Constantin watches. With the four one-of-a-kind Les Cabinotiers Minute repeater tourbillon – Four seasons models, the Manufacture perpetuates the tradition of chiming watches by drawing inspiration from this emblematic 1940s timepiece.

Each of the watches is equipped with the 2755 TMR calibre, which regulates the striking mechanism by means of a one-minute tourbillon with a rotating carriage serving to neutralise the effects of the Earth's gravity. The manual-winding movement, with a 58-hour power reserve discreetly indicated on the back, beats at a rate of 2.5Hz (18,000 a/h), a low frequency typical of traditional watchmaking. With its 471 components, the 2755 TMR calibre incorporates a silent centripetal flywheel strike governor, guaranteeing the excellence of the minute repeater.

Depicting the undulations of a carp swimming in a decor graced with seasonal colours, the dials are to artistic crafts what the minute repeater is to mechanical horology: a demonstration of exceptional expertise. Masterpieces of miniaturisation, these watch faces are engraved using the bas-relief technique to highlight the richness of the scenography. No less than 60 hours per dial are required to engrave the material with a burin in order to create a depth effect based on differences in height of up to 1.35 mm. The enameller then takes over with a palette of 12 colours applied using the champlevé technique, which involves embedded the enamel in the cavities created by the engraver. Around 15 firings are then necessary to achieve the desired colours by applying successive layers.  ese high-risk operations must be carried out with the greatest care to prevent multiple firings from cracking or dulling the enamel.

In the Vacheron Constantin universe, Les Cabinotiers represents a department in its own right dedicated to the personalisation of pieces and unique creations. This tradition dates back to the 18th century, a time when master watchmakers were called cabinotiers and worked in ateliers bathed in natural light, known as cabinets and located on the top floors of Geneva's buildings. In the hands of these learned artisans, open to the new ideas of the Enlightenment, exceptional timepieces were born, inspired by astronomy, mechanical engineering and the arts. This expertise, which constitutes the great Geneva watchmaking tradition, has been flowing through Vacheron Constantin’s veins since 1755.

Chiming watches occupy a special place among horological complications. For more than two centuries, these complex mechanisms have been highlighted by Vacheron Constantin. Today, Les Cabinotiers department has chosen to pay tribute to them through one-of-a-kind creations on the theme "La Musique du temps".

Born from the need to tell the time in the dark in an age when people had to rely on candlelight, "audible" watches have taken various forms: repeaters (indicating the hours and sometimes the quarters and minutes on request), sonnerie (striking) watches (indicating the hours and quarters in passing) and alarms (which can be programmed to ring at specific times). While each of these complications has its own distinctive characteristics, they all combine an integrated and complex mechanism with the finely crafted nature of musical instruments in terms of their resonance, acoustics and harmonics. Featuring watch cases equipped with complex movements as their only means of musical expression, these creations represent a magnificent feat of miniaturisation.

At Vacheron Constantin, the first mention of a chiming watch dates back to 1806: a gold pocket watch with minute repeater registered by the founder’s grandson Jacques-Barthélemy, in the very first production register kept in the company's archives. Ever since, sonnerie or repeater watches have been an integral part of the Manufacture’s proud heritage, steadily enriched over the decades.

Sound and music have always played a role in the Maison’s partnerships, the latest of which is with Abbey Road Studios, a name closely associated with iconic artists such as The Beatles, Adele and Oasis. In collaboration with the studios, Vacheron Constantin launched its Fiftysix collection, backed by the "One of not Many" campaign. The partnership also has a role to play for "La Musique du Temps", as Vacheron Constantin entrusts Abbey Road Studios with recording the unique sound of each model.

"Above and beyond extremely similar values, Abbey Road Studios and Vacheron Constantin work closely together on creative collaborations involving both content creation and sharing expertise. Entrusting the production of the sound prints of our pieces to an internationally recognised expert in the recording world is an integral part of our collaborative endeavours," explains Laurent Perves, CMO Vacheron Constantin. For the first time, the repeater watches from the “La Musique du Temps” range have a unique sound imprint, recorded and certified by Abbey Road Studios. "The opportunity to capture the sonic identity of these incredible timepieces is a privilege," explains Jeremy Huffelmann, Head of Partnerships at Abbey Road Studios. “These recordings perfectly encapsulate the shared values of craftsmanship, expertise and excellence that de ne our collaboration, whilst forever preserving the personality of these singular timepieces.”

Vacheron Constantin’s Les Cabinotiers department has drawn inspiration from the Manufacture's very first minute repeater wristwatch, an ultra-thin timepiece introduced in 1941. Watchmaking excellence continues today at the heart of Les Cabinotiers Minute repeater tourbillon – Four seasons equipped with the 2755 TMR calibre. This movement regulates the mechanism chiming the hours, quarters and minutes on demand by means of a one-minute tourbillon with a rotating carriage serving to neutralise the effects of Earth’s gravity. Each dial represents a masterpiece of miniaturisation on which the colours of the seasons are first engraved by hand using the bas-relief technique to highlight the richness of the scenography. Using the champlevé enamelling technique, the dozen or so colours are applied in successive layers and fixed by as many firings in the kiln. The result is four unique dials for four exceptional watches.

•     Developed and manufactured by Vacheron Constantin