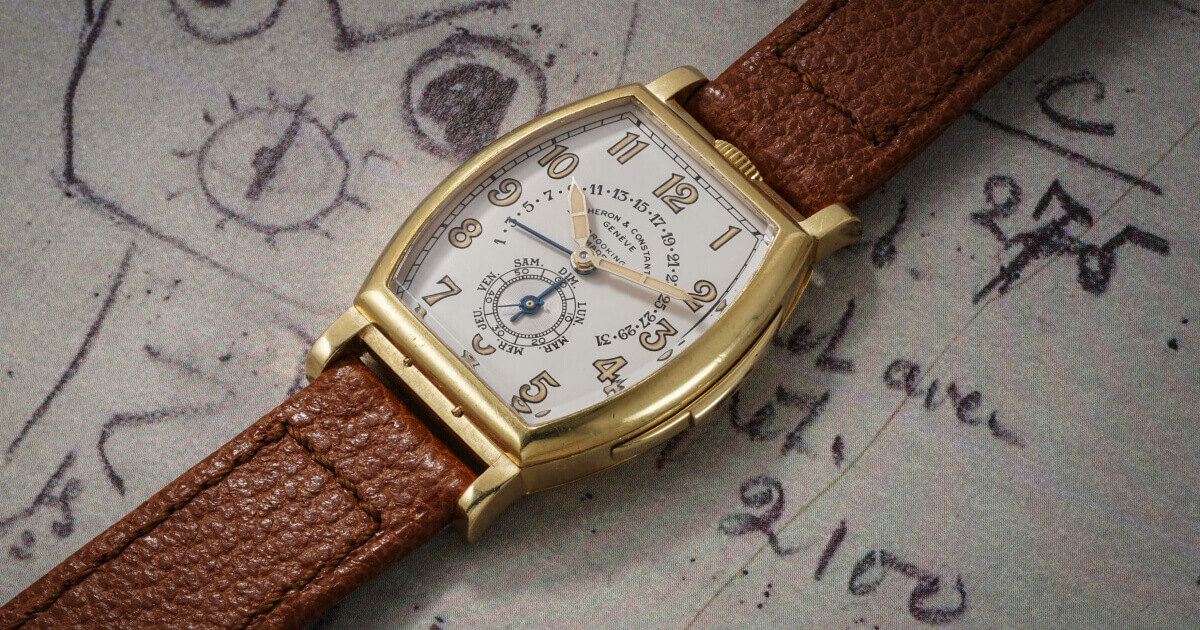 This Spring Phillips in Association with Bacs & Russo has discovered one of the most sought-after wristwatches ever made, a Vacheron Constantin minute repeater yellow gold wristwatch with retrograde calendar from 1940. Known as the “Don Pancho” in reference to its owner’s nickname, the timepiece was kept by the family of the original owner in a vault for over 60 years and is, in all likelihood, one of the most complicated wristwatches ever produced at the time, when horology was pure genius and art.

This watch adds further interest to an already very promising auction - The Geneva Watch Auction: NINE- a double-evening sale to take place at La Réserve, Geneva on May 11 & 12, 2019.

Aurel Bacs, Senior Consultant of Bacs & Russo and Alex Ghotbi, Head of Sales in Geneva enthusiastically declared “We believe this is one of the most important wristwatches in the world. Previously, the only record of this watch being made was a black and white picture of the watch, which fascinated us. Both of us have been dreaming and talking about this watch for years, and finally, we can say it is not a myth, but a real treasure. There was, in the 1930s, no other calendar wristwatch with retrograde date and minute repeater, so it was a revolutionary watch, made to measure for a very important patron. Given that there is nothing like it and that it is the masterpiece of Vacheron Constantin’s wristwatch production of the 20th century, we believe this watch is the very definition of a museum quality timepiece.”

In December 1935, the renowned Geneva-based watchmaker Vacheron Constantin received a letter from Madrid-based retailer Brooking who, on behalf of a client, wished to commission a watch. The order, highly unusual at the time, combined a large yellow gold tonneau case, a crown at twelve, a minute repeater with the lowest possible notes, a repeater trigger on the right side of the case, day, retrograde date, and his initials in blue enamel on the caseback. Two dials, one with enamelled black Breguet numerals and the other with radium numerals, both with all twelve numerals, and 6 straps which are easily changeable.

The creation of this masterpiece was a combined effort among Switzerland’s greatest craftsmen who had worked on some of the most complicated watches to have been produced:  the repeating mechanism being assigned to Nicole, the calendar to Victorin Piguet, and the dial to Stern Frères.

The watch was finally delivered in January 1940 – with only one radium dial – to its future owner, Francisco Martinez Llano so-called “Don Pancho”, a successful Spanish businessman. Francisco Martinez Llano had left his native Spain in the late 19th century for Latin America where he made his fortune in mining in Chile. He was a philanthropist and a benefactor whose self-imposed mission was to bring education to poorer families by funding schools both in Spain (where he received recognition from Alphonso XIII, King of Spain) and Chile.

From then, mystery surrounded what was probably one of the most complicated wristwatches ever produced at that time, the watch disappeared for over 60 years. This timepiece had turned into a legend that every horological collector, scholar and enthusiast wanted to pursue but could not as its very existence was untraceable… until now.

Following the owner’s passing away in 1947, the watch remained in a vault for over 60 years before it was rediscovered by his family. The years spent in the hot and humid climates of Latin America had left their traces on this timepiece. As a result, the original dial showed substantial ageing and the movement needed complete restoration.

The watch was assigned to Vacheron Constantin’s expertise and talented watchmakers for restoration, left in the caring hands of its maker with the instruction to: restore the movement using the original components where possible, not to polish the case and to create a second dial, identical to the original one with the techniques used in the 1930s. The only exception being the use of modern luminous material as opposed to radium. The original unrestored dial is also offered with this watch.

For months, a team from the Vacheron Constantin Heritage department worked relentlessly to uncover all archival material available and a team of watchmakers was dedicated to bringing this watch to its former glory. The final result is nothing short of astounding.

Made during an era where multi-complicated wristwatches simply did not exist, it was a technical feat and masterpiece of human genius. Housing such a complex mechanism in a wristwatch by itself if simply an exploit. The combination of a minute repeater and calendar with retrograde date were never seen before in a wristwatch.

Only three wristwatches featuring calendar indications and a minute repeating mechanism made before the end of the 1940s are known today: A Patek Philippe that is today in the Patek Philippe Museum, the James Schultz made circa 1930 that is today in an important private collection, and the present Vacheron Constantin “Don Pancho”.

It is being offered with its original dial as well as duplicate documents and various sketches from the Vacheron Constantin archives retracing the evolution of the watch from original order to completion.