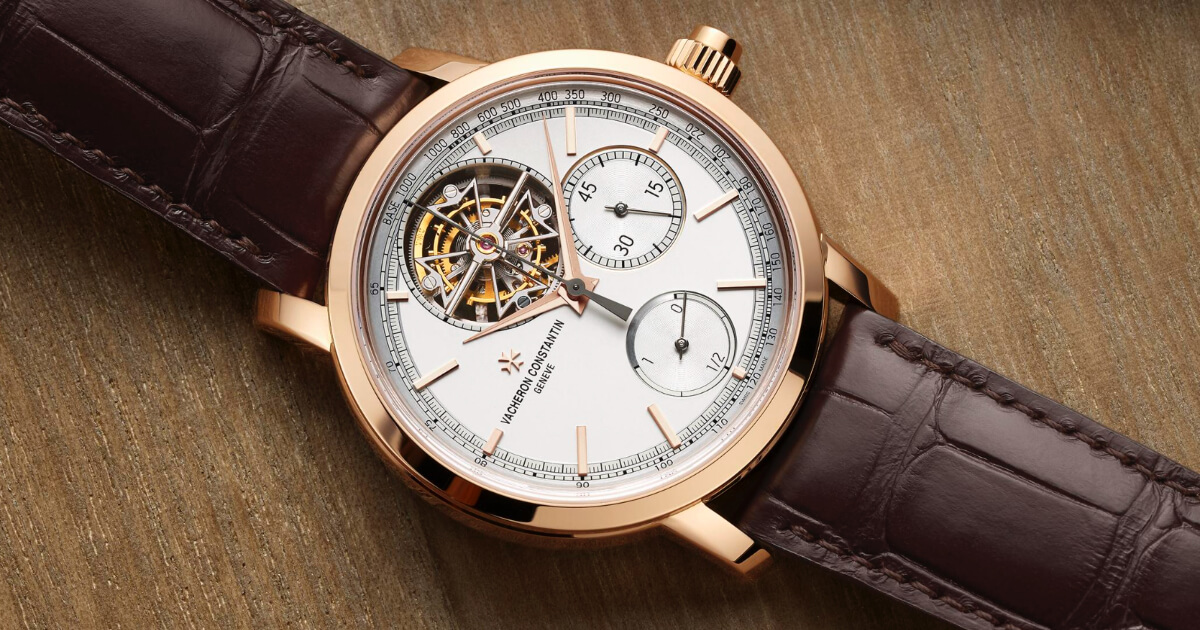 ·      An exceptional model stemming from the Vacheron Constantin Grandes Complications workshops, combining a monopusher chronograph with a tourbillon.

·      The elegance of a classically styled watch meets the temperament of a chronograph.

·      A tourbillon mechanism accentuated by a new carriage configuration.

·      A chronograph recalling its origins yet flaunting its vanguard performance credentials.

A modern expression of Geneva's grand watchmaking tradition, the new Traditionnelle tourbillon chronograph combines the precision of a monopusher chronograph with the sophistication of the tourbillon, a complication single-handedly symbolising the nobility of Haute Horlogerie.

Through its ties with centuries of watchmaking culture and its dynamic character, this timepiece pays tribute to mechanical complexity while respecting the Maison’s distinctive aesthetic codes and inherent elegance. “Etagé” case and lugs, a fluted case-back, a railway-type minute track, dauphine-type hours and minutes hands: the aesthetic codes of the Traditionnelle collection are all clearly present and the model Traditionnelle tourbillon chronograph showcases technical refinement conveyed through eminently horological characteristics.

Designed to compensate for the effects of the Earth's gravity on watch mechanisms, the tourbillon is considered an iconic chorological complication. Often appearing on the lower part of the dial, as if to underline its role in supporting the optimal functioning of the watch, the tourbillon of the new Traditionnelle Tourbillon chronograph takes pride of place at 12 o'clock, where it draws all eyes.

In order to offer a perfect view of its fascinating ballet, the Manufacture's developers have devised a novel movement mode for its carriage. Instead of being driven by the pinion of the fourth wheel, the tourbillon carriage is set in motion by an intermediate wheel of the running seconds display. This configuration enables an extremely wide opening onto the upper plate, thereby offering an even more spectacular view of the tourbillon.

The model also features a power-reserve indication at 6 o’clock and a 45-minute chronograph counter at 3 o’clock. The chronograph function monopusher inserted into the winding crown accentuates the technical side of the watch. It features a dynamic activation system (known as "all-or-nothing") which prevents the chronograph mechanism from engaging when insufficient pressure is exerted on the pusher. It also revives the spirit of the original pocket chronographs before the mechanism migrated to the wrist: these models had only one pusher, often housed in the crown, which successively handled the start, stop and reset functions.

While the chronograph thereby recalls its origins, it also flaunts its vanguard performance credentials through the use of the “friction” technique for the lateral clutch mechanism combined with a column wheel, thus ensuring smooth activation of the function and preserving it from excessive wear over the long term. This technique also reduces potential stuttering of the chronograph hand when it is activated.

Finally, the 45-minute counter with dragging display serves to reduce the loss of amplitude generally noted when the chronograph function is activated. When the latter is stopped, this type of display also serves to provide a more accurate time indication.

To power this timepiece, Vacheron Constantin has chosen a mechanism that is an integral part of its history, the 3200 calibre presented on the occasion of the Manufacture's 260th anniversary. A technical masterpiece combining 292 components assembled by the most expert hands, this manual-winding tourbillon chronograph movement is distinguished by its 2.5 Hz frequency, which makes its steady beating visually easy to follow.

The care devoted to decorative details is a sure sign that this model does indeed belong to the world of classic watchmaking: the aesthetic of the tourbillon carriage is inspired by the Maltese cross, its bar is entirely hand-finished and the finishes of the movement itself call upon the noblest horological traditions (chamfering, circular-graining, Côtes de Genève).

The new Traditionnelle tourbillon chronograph sets the stage for a tourbillon placed at 12 o'clock and a monopusher chronograph, which pay tribute to the history of Haute Horlogerie and reflect Vacheron Constantin's technical mastery in the crafting of Grandes Complications. As with all creations from the Maison, particular attention is lavished on the decorations and hand-finishing, whether the tourbillon carriage or the components of the in-house 3200 calibre.

·      Developed and manufactured by Vacheron Constantin

·      Black screw for the second indication on the tourbillon carriage