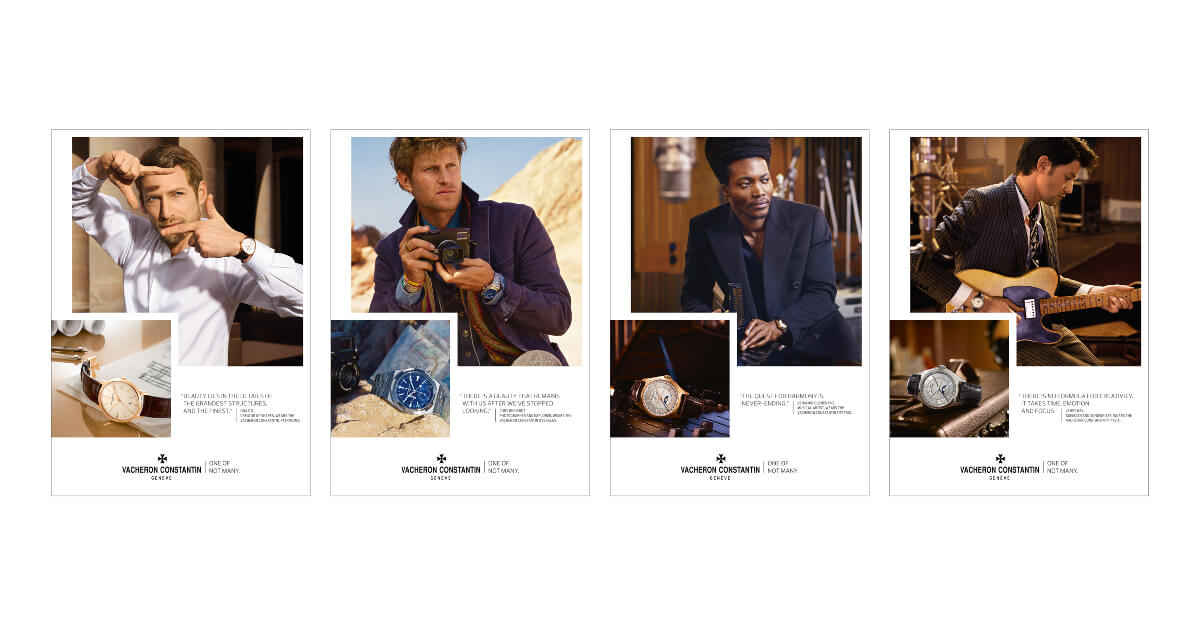 “One of not many”. The signature of the new Vacheron Constantin communications campaign de nes the exceptional universe it has embodied for more than 260 years. In the prestigious realm of Fine Watchmaking, this is a Maison for connoisseurs, profoundly attached to human values and enriched by expertise passed on across generations of master watchmakers and artisans.

Founded in 1755, Vacheron Constantin is the oldest watch manufacturer in continuous operation. For more than 260 years, it has been constantly reinventing itself in keeping with the purest Fine Watchmaking traditions. Its philosophy is grounded on knowledge rather than outward appearance. The constant innovation, the spirit of exploration, the passion and the uncompromisingly high standards of its watchmakers and artisans; the transmission of ancestral skills, the wealth of its heritage and its ability to adapt to its times: such are the values that earn it both recognition and respect within the exclusive circle of Fine Watchmaking connoisseurs.

“The watch industry represents over one billion watches per year, of which only 25 million are produced in Switzerland and barely 500,000 can lay claim to Fine Watchmaking status. Within this context, Vacheron Constantin focuses on limited and reasonable production volumes, as required to offer the highest level of quality, aesthetics and expertise. Within an already highly exclusive segment, our Maison is committed to maintaining a unique and sophisticated character. In this respect we are resolutely One of not many”, explains Louis Ferla, CEO Vacheron Constantin.

Through their understated elegance, Vacheron Constantin watches carry within them this identity forged from a subtle balance between technical expertise and aesthetic refinement, between tradition and innovation.  They are born of rigorous discipline, humility and a desire for self-surpassing.

To embody this spirit, the Maison has chosen to cooperate with talented artists whose personality and work express a constant quest for excellence, openness to the world as well as a spirit of innovation and creativity characterizing Vacheron Constantin. Distinctive, visionary, passionate and acknowledged as experts in their respective fields, they also epitomise the concept of Connoisseurs.

Paving the way is the uniquely compelling artist Benjamin Clementine. Considered one of the most talented musicians of his generation, Clementine has established himself as a virtuoso multi-instrumentalist, a contemporary poet and an outstanding vocalist. With a creative spirit that speaks to a generation searching for more, true to his craft, Benjamin Clementine personifies “One of Not Many”.

As for the artist James Bay, creativity is never a given: it is an uncertain formula requiring a fine balance of time, focus and emotion. Far from resting on his laurels after the global success of his first album, he has opted to explore new musical territories and to reinvent himself with a daring and sophisticated second album mingling rock and soul sounds.

Both are associated with the modern and cosmopolitan elegance of the Fiftysix collection.

An influential and multidisciplinary designer, Ora Ito adopts the refined lines of the Patrimony collection, a singular expression of the balance between mechanical excellence, aesthetic sobriety and his signature "Simplexity" concept.

Cory Richards, a seasoned photographer and an intrepid explorer who has climbed Mount Everest without oxygen, travels the world to capture its most beautiful and unexpected images. He shares with the Overseas line the spirit of discovery and openness to the world.

As Laurent Perves, Chief Marketing Officer of the Maisonpoints out: “The worlds in which these talents are active – music, design, exploration and photography – are legitimate and relevant territories in which Vacheron Constantin has long since been present. What is most important in their work and in ours is transcending objects in order to generate emotion.”

These inspired artists have taken part in the art direction of the new communications campaign. “This is the first stage in a broader project involving creative cooperation with each of these talents, and others to come”, says Laurent Perves. “These human and artistic encounters are undeniably in line with those that have punctuated the history of the Maison since 1755.”

The campaign images, shot by Phil Poynter, offer a backstage view of the art and savoir-faire of these talents. From one visual to another, the human hand leaves its unique imprint, adjusting proportions, controlling focus or tuning an instrument, in a manner unmistakably akin to that of Vacheron Constantin artisans and master watchmakers.