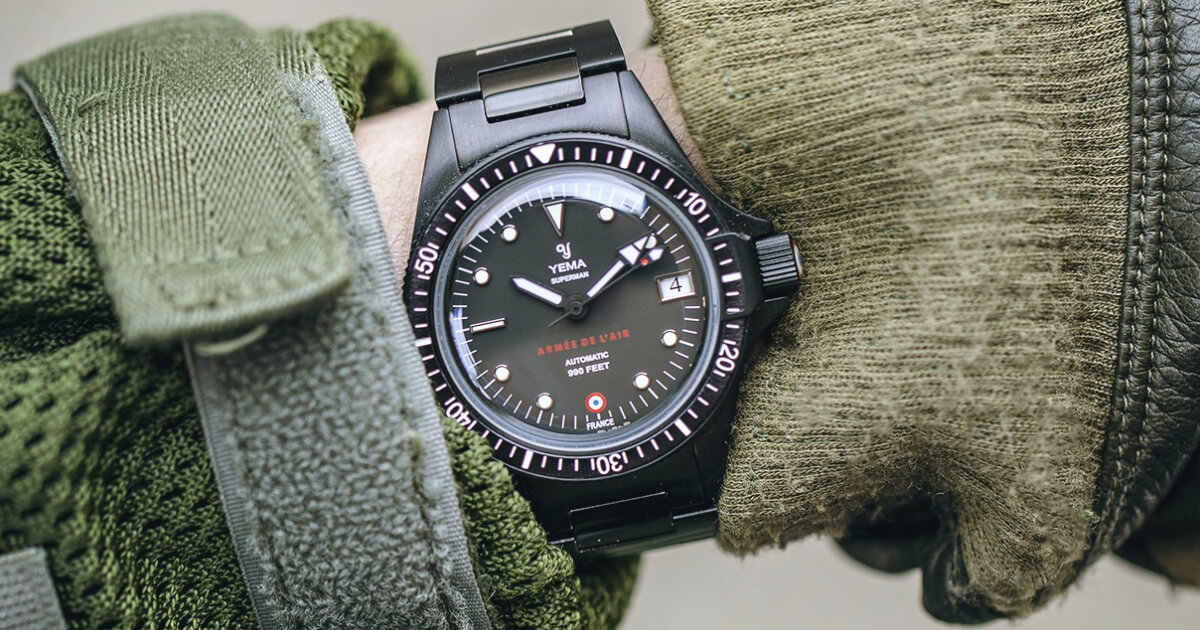 The blue-white-red French national insignia used on military aircraft since World War I beautifully replaces the 6 o'clock index and is also stamped on the crown under a crystal coating, while the French Air Force logo is found on the dial and the case-back.

Available in both black PVD and Steel case, the Superman French Air Force is equipped with Yema's in-house caliber MBP1000 and features a matt black dial printed with "French Air Force" logo and the coloured national insignia at 6 o'clock.

These 2 models are proposed as a Collector's Edition limited to 1,948 timepieces each, delivered in a French Air Force branded leather travel case and the official pilot watch canvas strap in addition to the original steel bracelet. Available for pre-order as from April 20th at yema.com.

Yema's in-house self-winding mechanical movement, caliber MBP1000, is entirely designed, developed and assembled at Morteau workshops in France. It beats at 28,800 vibrations / hour, has a power reserve of 45 hours and has 31 jewels.

The Superman French Air Force Black is made available with a sapphire domed crystal making it more scratch-resistant and vintage looking.

The stunning metal accents of the embossed white markers along the printed dark red French Air Force logo and the coloured national insignia at 6 o'clock create a striking contrast against the matt black dial.

A black PVD treatment is applied to the hour and minute hands as well as the iconic 1970's seconds hand with its head shaped like a shovel.

The French Air Force national insignia is stamped on the crown under a crystal coating.

Back in the 1970's, the first Yema watch made for the French Air Force was designed to equip their Diver Rescuers team but was also used by fighter pilots, hence the dual SEA-AIR features of this unique military tool watch.

The 316L Steel caseback proudly displays Yema's historic crest beautifully embossed with a hydraulic press. Each watch is engraved with a unique number from 0001 to 1948 regardless the diameter chosen.

The 316 L stainless steel bracelet with secure-lock comes with a diver’s extension so it can adjust it easily and quickly over a diving suit.

This unique canvas strap is primarily chosen for its rigidity in the most extreme conditions. The inside of the band is made of leather for excellent wearing comfort and is decorated with France's Air Force logo.

The hands and markers are treated with Swiss Super-LumiNova so as to offer perfect readability in low light conditions.

Yema also offers this watch as a non-limited edition with a quartz movement, the Ronda 515. This Swiss quartz movement is composed by 3 hands and date. Thanks to its stepping motor and power saving mechanism, energy consumption is reduced by 70%.

The watch is limited edition to 1948 pieces for each version and one can reserve his/her preferred number upon order (subject to availability).