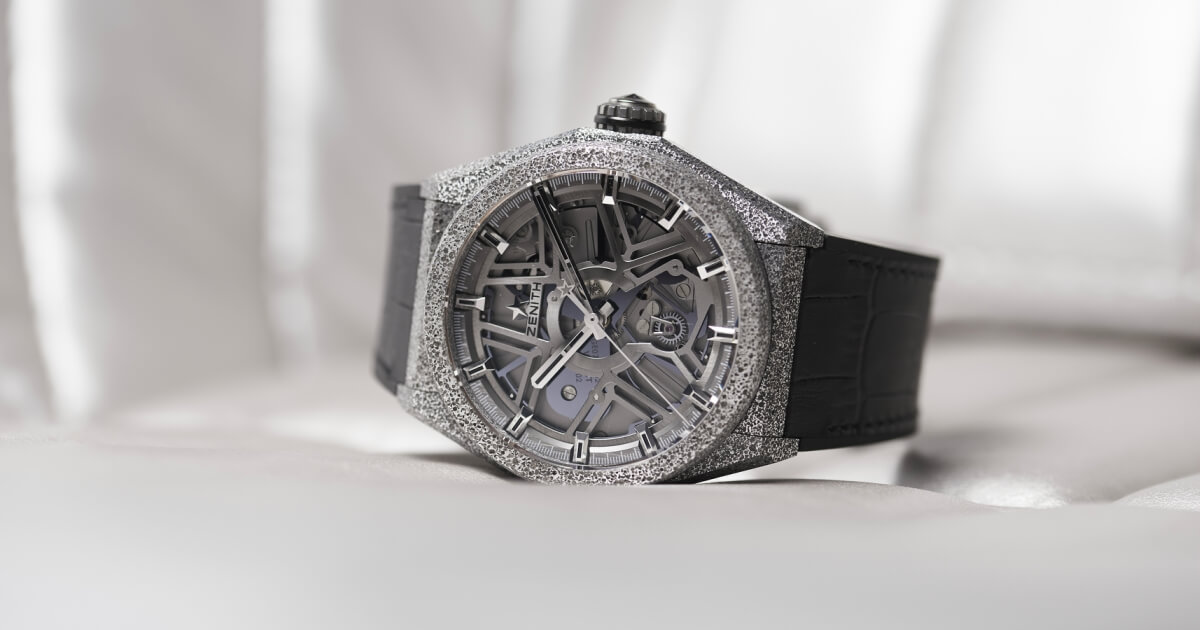 A new oscillator representing a major innovation in the watch industry since the 1675 invention of the balance and hairspring principle by scientist Christiaan Huygens. Zenith is writing its future and starting a new chapter in the history of the Swiss watch industry.

Connoisseurs will scarcely need reminding of the paternity of the Swiss watch industry’s first ever automatic chronograph introduced in 1969, which also featured a function that had not yet been seen nor even imagined at the time. Nobody was capable of measuring tenths of a second, the unit of time naturally stemming from a 5 Hz oscillation frequency. It represented a kind of watchmaking Holy Grail! The El Primero movement is often cited and has indeed become a Swiss watchmaking legend that vividly reflects Zenith’s enduring attachment to innovation and the quest for precision.

The announcement was made at a press conference held at the Manufacture Zenith in Le Locle and hosted by Jean-Claude Biver, President of the Watch Division, along with Zenith CEO Julien Tornare and Guy Sémon, CEO of the Science Institute LVMH. This innovative watch was developed through achieving effective synergies between the skill sets cultivated by the brands composing the group’s Watch Division, an endeavour overseen by Guy Sémon.

Defy Lab is the first and only mechanical watch embodying both an evolution and an improvement of the sprung balance principle presented in January 1675.

Since 1675, the principle of the coupled balance and hairspring (sprung balance) that Christiaan Huygens presented to the French Royal Academy of Sciences in the form of a clock has remained unchallenged. While it has definitely been improved and is undoubtedly now optimised to the greatest possible extent, it has nonetheless never called into question as such, instead regarded as both timeless and invariable.

A new oscillator forming a monolithic whole, made of monocrystalline silicon (with details finer than a human hair), replaces the sprung balance. The 30 or so components of a standard regulating organ (which requires assembly, adjustment, timing, testing and lubrication) are thus replaced by a single element measuring just 0.5 mm thick (compared with the usual 5 mm.)

This breathtaking development beats at the incredible frequency of 15 Hertz, with an amplitude of +/- 6 degrees, and is endowed with an almost 60-hour power reserve – more than 10% more than that of the El Primero – despite a three times higher frequency.

This frequency endows it with an exceptional – almost 10 times higher – degree of accuracy. Its mean daily rate is precise to within just 0.3 seconds. (By way of example, one of the criteria for COSC “chronometer” certification is the average daily rate on the first ten days of testing: from -4 seconds to +6 seconds, meaning up to 10 seconds per day).

Moreover, it remains accurate far beyond 24 hours of operation (the moment when mechanical watches begin to lose their energy and thus their accuracy). This new oscillator maintains the same degree of precision for 95% of its power reserve.

No need for oil: no more contact means no more friction or wear, and thus no need for lubrication.

Insensitivity to temperature gradients, gravity and magnetic fields eliminates the key weaknesses of the current balance-and-spring assemblies that are subject to deformation and/or dilatation, thereby leading to diminished precision.

Triple certification, including chronometer certification displayed by by the viper’s head emblem awarded by Besançon Observatory, on behalf of the International Bureau of Weights and Measures. With regard to thermal behaviour, the spectrum of the ISO-3159 standard has been broadened: variations of around 0.3 seconds per day and per degree Celsius of deviation are certified, which is twice as good as the recommended figure. Finally, the watch meets the ISO-764 magnetic criteria, exceeding them by 18 times (for the completed watch), meaning it can withstand 88,000 Amperes per meter or 1,100 Gauss.

This mechanism opens up whole new vistas and enters a new dimension, representing no less than a reinvention of the Huygens principle with another mechanical system.

The first ten ZENITH Defy Lab watches (10 different versions, each is different) are sold in an exceptional collector’s gift box. All are already pre-sold.

Exterior of the Defy Lab:

First watch with a case (44 mm in diameter) made from Aeronith, the world’s lightest aluminium composite material.