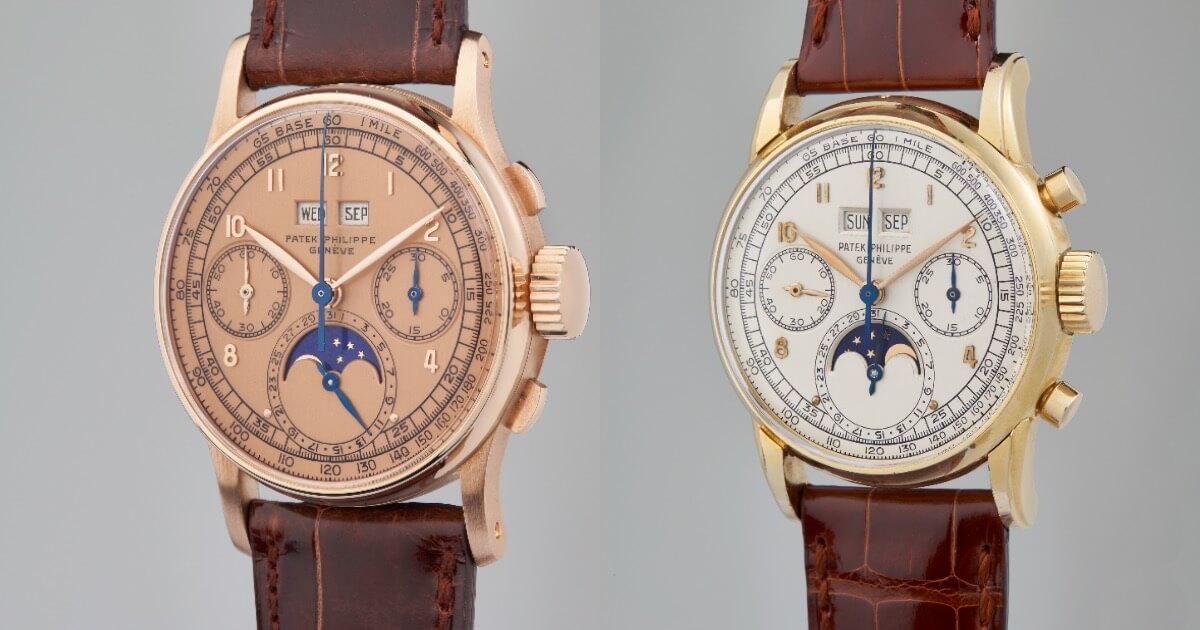 Following the announcements of The Jack Nicklaus Rolex Day-Date and The Marlon Brando “Apocalypse Now Rolex GMT-Master earlier this year, Phillips in Association with Bacs & Russo is pleased to reveal additional highlights from the GAME CHANGERS auction. The thematic, flagship evening sale taking place on 10 December marks the third New York watch auction for the company, following the groundbreaking WINNING ICONS sale in 2017 and the STYLED thematic auction in 2018.

GAME CHANGERS is dedicated to watches owned by extraordinary people who are considered “game changers” in their fields, along with iconic collectors’ models from leading brands that have changed the course of watchmaking and watch collecting. The sale will also include other important timepieces that are outliers in terms of provenance, aesthetics, condition, or rarity.

The December auction will be led by two extraordinary vintage Patek Philippe perpetual calendar wristwatches being offered for the first time publicly — a legendary reference 1518 in 18k pink gold with a pink dial and a possibly unique reference 2499 in 18k yellow gold. Another exceptional highlight is one of the most important timepieces ever made — a unique Urwerk AMC comprised of an atomic clock and paired titanium wristwatch.

Some of the finest watches available anywhere in the world in terms of quality and condition will also be offered, including elegant dress, sports, and complicated watches by prestigious collectors’ brands such as Patek Philippe and Rolex, A. Lange & Söhne, Audemars Piguet, Vacheron Constantin, Omega, TAG Heuer, Jaeger LeCoultre, and Breitling, along with leading independent brands such as Urwerk, Philippe Dufour, F.P. Journe, and Richard Mille.

Paul Boutros, Phillips’ Head of Watches, Americas, said, “GAME CHANGERS is one of the strongest sales that our team has had the privilege of assembling, with a remarkable number of ground-breaking watches making their auction debut for the first time. This sale marks the first time that Phillips will offer an atomic clock and we are thrilled to present this fascinating technological masterpiece by Urwerk to the public. We are also honored to have the opportunity to offer several lots whose proceeds will benefit important charities across the world, including the Rolex watches owned by Jack Nicklaus and Marlon Brando, a unique TAG Heuer Monaco Piece d’Art that will benefit the Boys & Girls Clubs of America, a unique Vacheron Constantin Overseas that will support the National Geographic Society, and an Urwerk UR-105 CT worn by Robert Downey Jr.’s Iron Man character in the blockbuster 2019 film Avengers: Endgame, being sold to benefit Random Act Funding. We look forward to kicking off our world tour this month in London and welcoming the public to view these exceptional timepieces.”

The world’s first perpetual calendar chronograph produced in series, only 281 examples of the Patek Philippe reference 1518 are believed to have been made – the vast majority in yellow gold, rarely ever seen in pink gold, and only four known in stainless steel. Phillips is proud to offer this extraordinary “pink-on-pink” example, in 18 karat pink gold with its original pink dial. The watch is fresh-to-the-market and previously unknown, coming directly from the family of the original owner. As one of the most desirable perpetual calendar chronograph wristwatches to own, this rare timepiece is a treasure to behold, and a true trophy watch for the connoisseur of complicated Patek Philippe wristwatches.

Amongst high-end complicated wristwatches, the Patek Philippe reference 2499 can be considered one of, if not the most, iconic and desirable trophy watches to crown any collection. The present, possibly unique example in yellow gold from 1951 is the only known Vichet-cased 2499 to ever appear with round pushers originally delivered by Patek Philippe, making it one of the most important examples of the reference to ever surface. Absolutely fresh-to-the-market, it remains in well-preserved, original condition. Its utter rarity, combined with its outstanding condition, beauty, and superb collectability presents a rare opportunity for the most discerning collector.

A tour-de-force of modern watchmaking, Urwerk devoted 10 years of research and development to create this masterful work of art that is a marriage between two state-of-the-art approaches to chronometry. Fusing traditional horology and atomic physics, two fully autonomous but linked systems were created that achieve high performance precision timing with a margin of error of one second in 317 years. The synthesis of centuries of innovations, the AMC can be considered one of the most important timepieces ever created. Comprised of an atomic master clock and a mechanical wristwatch, the master clock automatically winds, sets, and extraordinarily, regulates the wristwatch to improve its timekeeping. It is one of only less than a handful of timepieces ever created capable of this remarkable feat.

Collectors speak of “grail” watches, and the Rolex Cosmograph Daytona with “Paul Newman Lemon” dial is one such watch. A very rare reference 6264 in 18 karat yellow gold, the present watch features an extremely rare and coveted dial with a beautifully matte grèné, or grained, intense yellow colored dial with distinct white-printed graphics printed on its black sub-dials. Originally retailed in France, the caseback is stamped with coveted French hallmarks – two owls and a “Société Rolex” mark. Appearing for the first time publicly, it’s one of a very few examples of a vintage Daytona with Paul Newman Lemon dial to ever appear at auction, and its breathtaking condition makes it one of the finest examples known.

Amongst the most sought after and iconic of all “Paul Newman” Daytonas, the “John Player Special” takes its nickname from the black and gold livery found on Team Lotus’s Formula One race cars of the 1970s. Absolutely fresh-to-the-market, this previously unknown “John Player Special” in 18 karat yellow gold displays some highly collectible and coveted traits, including a  well-preserved case, and a stunning dial that is as close to a perfect 10 out of 10 as one will ever see. Elevating its desirability, the watch furthermore comes accompanied with its original Rolex guarantee.

An exceptionally well-preserved example of the exceedingly rare Breitling reference 809 Navitimer Cosmograph with “all black” dial will also be offered – the very same reference that was the first Swiss chronograph ever worn in space by the Mercury Seven astronaut, Scott Carpenter. Manufactured in June 1962, the present example was owned and worn by another original Mercury Seven astronaut, making it amongst the most important Breitling watches to ever appear at an international auction, and a true trophy watch for the connoisseur. The consignor intends to donate a portion of the proceeds of the sale of this watch to The John Glenn College of Public Affairs at The Ohio State University.

The LeCoultre “Lucky 13” (read more about here) is a truly remarkable and unique watch presented by the Chicago Anti-Superstition Society alongside 13 U.S. Senators to an original Mercury Seven U.S. astronaut to commemorate his historic achievement of becoming the first American astronaut to orbit the Earth. Featuring the number 13 at every hour marker, the watch celebrated the Friendship 7 spacecraft capsule used for the Mercury-Atlas 6 mission. Friendship 7 was the 13th space capsule produced by McDonnell Aircraft Corp, and the 13s on the dial were used to illustrate the society’s rejection of the number 13 as unlucky. The ceremony, taking place on Friday, April 13th, 1962, was entered in the House Congressional Record on October 13th, 1962. The consignor intends to donate a portion of the proceeds of the sale of this watch to The John Glenn College of Public Affairs at The Ohio State University.

Watches to Be Offered to Benefit Charitable Causes

A unique piece made for the American climber, mountaineer, explorer, and photographer, Cory Richards, Vacheron Constantin created this Overseas Dual-Time Prototype in partnership with Richards for his third attempt at climbing Mount Everest. Richards sought a robust wristwatch that could accompany him through one of the world’s most grueling expeditions while keeping track of time on Everest and back at home in the U.S. The 41mm case is made of titanium with tantalum reinforcements – a first for the brand. This Overseas is being sold to benefit the National Geographic Society, a non-profit organization dedicated to pushing the boundaries of exploration and generating solutions for a healthy, more sustainable future.

The UR-105 CT Iron combines the best of Urwerk’s design and innovative watchmaking capabilities in a wristwatch that can be appreciated by watch enthusiasts. The present UR-105 CT Iron “Endgame” is a unique piece, worn on the wrist of Tony Stark and Iron Man, played by Robert Downey Jr. in the record-breaking 2019 film, Avengers: Endgame. Proceeds from the sale of this watch will be donated to Random Act Funding, a charitable organization founded by Susan and Robert Downey Jr. States Robert Downey Jr., "I've always been a fan of URWERK timepieces, and was proud to have one on my wrist for Endgame... To have it wind up at a prestigious auction to be sold for charity is the icing on the cake."

Created in celebration of the 50th anniversary of Tag Heuer’s iconic Monaco model, the Monaco Piece d’Art began as a “new old stock” timepiece originally made in 1969, featuring the Calibre 11 – the Swiss watch industry’s first self-winding chronograph movement. For the first time ever, TAG Heuer’s watchmakers disassembled the vintage caliber 11 movement within and applied high-grade finishing on every part, including mirror polishing functional surfaces, screw heads and adding three new jewels to create a truly unique art piece. Proceeds from the sale of this watch will be donated to the Boys & Girls Clubs of America. Founded in 1860, just like TAG Heuer, this charity provides high-quality programs and unique experiences for young people.