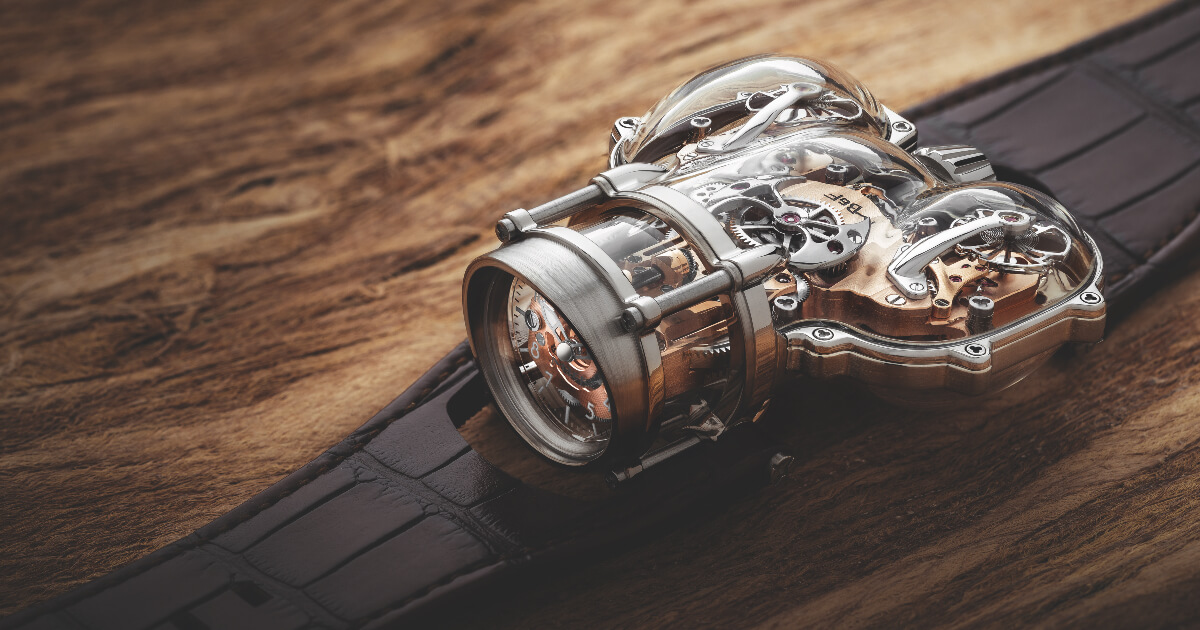 First presented in 2018, Horological Machine N°9 – nicknamed HM9 ‘Flow’ – was a tribute to the extraordinary automotive and aeronautic designs of the 1940s and 50s. The result was a case like no other that echoed the epoch’s flowing, aerodynamic lines.

Despite its striking external appearance, MB&F founder Maximilian Büsser described the engine inside HM9 as “the most beautiful movement we’ve created to date”. What other logical step was there to take, if not to encase the HM9 engine in a transparent sapphire crystal shell?

An outer hull of sapphire crystal and precious metal, curved and bubbled and precisely fitted together in three parts, is sealed with a proprietary combination of patented three-dimensional gasket and high-tech compound bonding process. Two fully independent cantilevered balances channel data into a differential that turns two heartbeats into one coherent time-pulse. Ultra-precise conical gears efficiently turn the engine’s energy and information current through a 90° angle to feed the time display on a sapphire crystal dial, marked with Super-LumiNova.

On the reverse, co-axial beneath each of the balances are propellers: twin turbines that spin freely as an element of pure visual interest, waiting for someone to begin a new type of exploration. Two years after the initial HM9 Flow ‘Air’ and ‘Road’ editions conquered land and sky, HM9-SV takes us to the depths of the ocean – the last realm on Earth that still holds a wealth of untold secrets. Before you is an exploratory vessel from Atlantis, powered by a divergent technology both familiar and strange to our eyes.

Externally, the lines of HM9-SV glide over the blueprint of its Road and Air-designated predecessors. The laws of fluid dynamics remain dominant in its design, although the hydro-governed objectives allow HM9-SV to take a more lenient approach to the sharp inward angles and parabolic curves of the previous Flow versions. From a technical standpoint, the reworked dimensions were necessary to account for the differences in material properties of sapphire crystal; although extremely hard, sapphire can fracture sharply under pressure whereas a metal would merely deform. The smoother lines of HM9-SV minimise potential areas of mechanical vulnerability – but they also reinforce its ocean-dweller’s aesthetic.

The HM9 engine follows in the paths opened by the engines of Horological Machines N°4 and N°6, casting aside conventions of movement construction. Its three-dimensional assemblage of wheels, gears, plates and bridges takes unexpected forms to inhabit the dynamic outer case, a beating union of mechanical viscera and endoskeleton in a crystalline body.

A traditional balance frequency of 2.5Hz (18,000vph) may seem curiously anachronistic in a modern timekeeper, but the sensitivity to shock associated with a lower beat rate is compensated for by having two balances instead of one. Statistically speaking, two identically calibrated systems offer a better averaged reading than one system on its own, which may deliver anomalous results for any number of reasons.

To further reduce sensitivity to shocks, the HM9-SV editions feature a new shock-absorbing system: helicoidal springs placed between the movement and the case. The springs are crafted by laser from a solid tube of polished stainless steel, offering excellent elasticity and limited lateral displacement.

Performing the task of averaging the time measurement from the twin balances of the HM9 engine is a planetary differential, the gearbox of the movement, which then delivers a final reading to be displayed on the perpendicularly oriented dial. This complex mechanical computation was partially revealed in the original HM9 Flow, with sapphire crystal domes set over each balance and with a magnifying pane mounted above the planetary differential, visually emphasising the importance of its chronometric role. In HM9-SV, every aspect of the engine is open to discovery; the eye can follow the interplay of components from barrel to balance, from differential to dial.

In order to seal the sapphire crystal exterior components into one watertight case, new solutions had to be created. A patented three-dimensional rubber gasket was already used in the original HM9 Flow to ensure water resistance when the tripartite case was bolted together. The 3-D gasket remains in HM9-SV, but the sapphire crystals are fused with the metallic frame thanks to a high-tech bonding compound, mastered via an in-house process involving a vacuum and high temperature. The result is a seal resistant to 3ATM (30m) of water pressure, despite practically invisible seams between the sapphire components and the minimalistic frame in 18K gold.

Corundum, commonly known in its gem-quality form as sapphire crystal, is one of the hardest minerals known to man. It is surpassed in hardness only by a few other materials, notably diamond (crystalline carbon), which rates a 10 on Moh’s scale of hardness, while corundum is rated at 9. This exceptional hardness means that sapphire watch crystals are virtually scratch-proof, providing unparalleled legibility and material integrity over the long term, not to mention imparting a level of prestige that is not associated with regular silicate glass or transparent polycarbonate — the two most common alternatives to sapphire watch crystals.

Concurrently, this also means that sapphire is extremely challenging to machine in complex three-dimensional shapes, a challenge that is compounded by the small machining tolerances required in watchmaking. Since its very first creations, MB&F has worked with ever-increasingly complicated sapphire crystal components; HM2 ‘Sapphire Vision’, the double-arched crystals of HM4 ‘Thunderbolt’, the recent HM3 FrogX and the hallucinatory body of HM6 ‘Alien Nation’ are prime examples.

Preparing the crystals for a single case of HM9-SV requires approximately 350 hours of careful machining and polishing; weeks of work that would be extended greatly if not for the 16 years of boundary-pushing sapphire crystal design that MB&F has accumulated since 2005.

More About The HM9 Engine

The result of three years of development, the HM9 engine is conceived and assembled entirely in-house, with the accumulated experience that comes with MB&F’s 18 different movements to date.

Long-time members of the MB&F Tribe will recognise the mechanical pedigree of the HM9 engine. Its double-balance system with differential is descended from the similar mechanism in Legacy Machine N°2 (please read more about here), albeit in vastly different aesthetic form. Whereas LM2 emphasised design purity and the hallucinatory effect of its suspended oscillators, HM9 is exultant in its celebration of expressive design.

Two balances beating within the same movement will inevitably bring up discussions of resonance, the mechanical phenomenon that describes linked oscillators in a state of mutual harmonic excitation. As with the LM2 engine, Horological Machine N°9 deliberately avoids inducing the resonance effect. Its purpose in including two balance wheels is to obtain discrete sets of chronometric data that can be translated by a differential to produce one stable averaged reading. This purpose would be defeated by two balances oscillating perfectly in phase, giving the same chronometric data at every point.

Regulating the twin balances is a challenge in its own category. Industry-standard equipment used in regulating a watch balance assembly uses the sound given off by an oscillating balance to measure beat rate. Because the HM9 engine has two balance assemblies operating simultaneously, creating two sets of sounds, this method is not possible here. When first launched in 2018, each example of Horological Machine N°9 had to be regulated by first blocking one balance to regulate the remaining one, and vice versa (please read more about here). When both balances were allowed to run, the calibration would shift slightly, requiring multiple rounds of re-blocking and re-regulating before an optimal chronometric result was achieved.

Since then, the MB&F team has advanced significantly in chronometric regulation techniques, largely thanks to the experience gained in creating Legacy Machine Thunderdome (please read more about here). HM9-SV thus benefits from a few additional years of specialised expertise in this area — not much in calendar terms, but immeasurable in terms of savoir-faire.

HM9 Sapphire Vision comes in four editions, each limited to only five pieces:

·       Dual spherical turbines under the movement

·       Shock-absorbing helicoidal springs linking the movement to the case

·       Hour/minute dial in sapphire crystal with anti-reflective treatment and Super-LumiNova on the numbers and indexes.

·       Total of five sapphire crystals treated with anti-reflective coating: three crystals for the main components of the case, one crystal covering the dial, and one crystal for the dial itself.